GM vs. Ford: What their EV split reveals 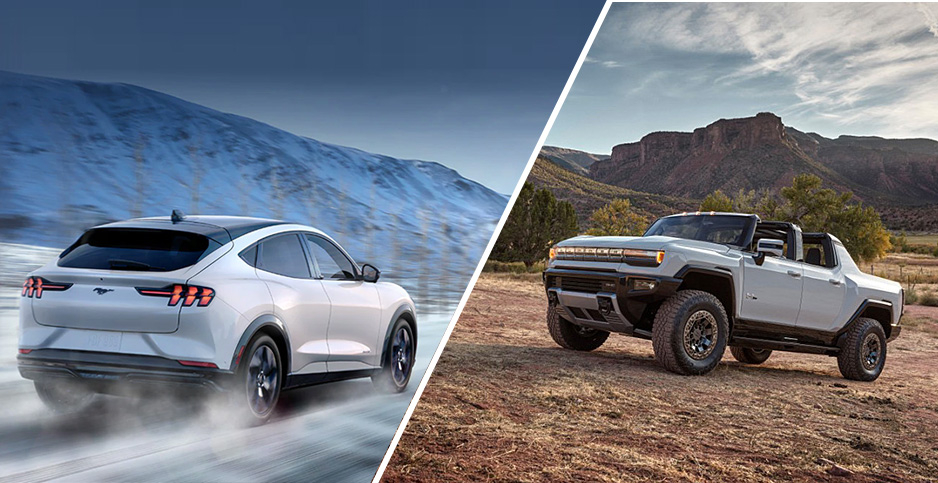 General Motors Co. and Ford Motor Co., America’s leading traditional automakers, made it clear yesterday that they are heading toward electrification at different speeds.

General Motors revealed that it is pressing the accelerator pedal hard, with a road map for multiple types of vehicles across all of its brands. Its funding is turning away from gas and diesel vehicles and toward making its own batteries, with the intention of being America’s biggest seller of EVs, aiming straight for the mantle held by Tesla Inc.

Ford is on a slower and more cautious road. It is hedging its bets by electrifying just a few vehicles. It will buy batteries from others and will try to make the endeavor profitable by providing services that keep buyers within its ecosystem.

These diverging paths were presented one after another at a virtual auto conference yesterday hosted by Barclays PLC, the British investment bank.

At either Ford or GM’s velocity, the plans are an unmistakable sign that electrification is moving to the center of the U.S. auto industry.

Experts said that GM’s new revelations in particular may have far-reaching consequences for American auto manufacturing, the intensifying global competition to lead in electric vehicles and the climate-warming emissions of the transportation sector.

"They dropped what I consider a pretty huge bomb on the U.S. auto industry and a pretty impressive indicator of what they’re up to," said Karl Brauer, an executive analyst with iSeeCars, an automotive research website.

Over the next five years, for the first time ever, GM’s investment in electric vehicles will exceed what it spends on gas and diesel vehicles. Between this year and 2025, the automaker will spend $27 billion on EVs and roll out 30 EV models. That is $7 billion more and 10 more models than commitments it made in March.

"We have everything in place to drive mass adoption of EVs," said GM CEO Mary Barra. "It’s why we will win."

GM for the first time said it means to be the top U.S. seller of electric vehicles, which is an audacious claim. According to Department of Energy data, GM’s Chevrolet Bolt, its only pure-electric car already on the market, sold 16,000 units last year, compared to 154,000 of Tesla’s bestselling Model 3.

Yesterday, GM also upped its claims on the performance of its all-important battery, saying that it will be both cheaper and denser.

The battery cells and packs being developing with LG Chem, called Ultium, will see price declines of 60% by mid-decade. It will more than double its battery density, and the maximum range such a battery could go was increased from 400 to 450 miles.

The cheaper, more compressed battery, however, won’t yet cause the overall vehicle price to reach parity with the gas-powered car within the next five years.

Prior to yesterday, General Motors had only committed to three EVs: the Chevy Bolt, which has been available since 2016, and for the future, the Lyriq and the Hummer.

Now it has made those plans more concrete. The GMC marque, which includes the Hummer SUV, will be followed by three others, including an electric pickup truck. Chevrolet, home of the Bolt, will get a pickup and an SUV crossover. Under Cadillac, the Lyriq will be joined by three other models.

Other unspecified models will also come to the Buick brand. Overall, more than two-thirds of the 30 models GM plans to produce by 2030 will be sold in North America.

GM’s focus on EVs puts it in the company of Germany’s Volkswagen AG, which since last year has made clear it is moving away from internal-combustion engines.

VW is spending most of its development money on electrified platforms and just last week accelerated that commitment, raising its expenditures on advanced vehicles — including electric, autonomous and connected vehicles — over the next five years to the equivalent of $86 billion, an increase of more than $15 billion.

Both automakers, the biggest sellers on their respective home continents, say they eventually want to be leading global sellers of EVs.

The other leading U.S. auto brand, Chrysler, has unspecified plans to electrify its brands, which include Jeep, Ram and Dodge. But the Chrysler name is likely to recede further into the background. In January, Chrysler’s parent, Fiat Chrysler Automobiles NV, plans to merge with Groupe PSA to create a global brand called Stellantis.

GM is one of several automakers that sided with the Trump administration in its effort to eliminate California’s ability to set its own auto emissions standards, which have effectively set a high national bar for tailpipe pollution.

"While General Motors tells a nice story to Wall Street, it’s working hand in hand with the oil industry and the Trump administration to gut the clean car standards that will actually bring about the transition to zero-emitting vehicles," said Luke Tonachel, the director for clean cars and fuels at the Natural Resources Defense Council.

Ford sided with California on the rule.

The difference in how Ford and GM see their roles in EVs is apparent in their approach on batteries.

GM sees its Ultium batteries as a key competitive advantage. The cells it will produce, at a factory now under construction in Lordstown, Ohio, will lead GM to bring a lot of its supply chain in-house instead of to suppliers, said Doug Parks, GM’s head of global product development.

Using a battery design unlike those of most other automakers, it is intended to be swappable, so a battery pack could be replaced with a more capable one at future dates. It is also the same battery cell regardless of the vehicle.

"That gives us scale, because we are producing the same cell in vast quantities," Parks said.

Ford, by contrast, is electrifying only a few vehicles: the Mustang Mach-E, an SUV version of the classic sports car; the F-150 pickup truck, the bestselling vehicle in the United States for decades; and the commercial Transit van, where it dominates the market.

"We’re going to grow in the right areas," said Kumar Galhotra, president of Ford’s America and international group, at the Barclays event. "We are going to lead in electrification where we have strength and scale."

Since the transition is bracingly expensive, Ford is planning to fund the transition with an expansion of services and subscriptions, which could earn money while increasing customer loyalty (Energywire, Nov. 13).

Ford is also finding it more dollar-wise not to manufacture its own battery cells and instead to buy them on the market.

"It is a question of scale. Right now, it makes more sense for us not to use our capital there," Galhotra said.

That gives the company flexibility, he added. "The technology itself is evolving," he said. "If we don’t spend a lot of money today, it gives us more optionality tomorrow."

Only time will tell whether making batteries or buying them is the better strategy.

Producing batteries in-house is "scary, and it’s really expensive and it’s maybe not for everyone, but that’s what it takes to produce EVs profitably and to take advantage of the financial benefits of producing EVs," he said.

"Ford doesn’t seem to be taking that approach, and it’s going to be harder for them to do it profitably," he said.

Brauer of iSeeCars, a longtime observer of the auto industry, said he was impressed by the audacity of GM’s battery plans.

"When they make a claim like this, I believe it, because GM doesn’t make claims lightly," he said. Of the improvements GM expects in battery price and density, he added, "they have probably locked in some ways to do this that others can’t readily follow."

Brauer conjectured that Biden’s win may have played into the timing and scope of GM’s electrification plan. "This was one of the last pieces of the puzzle," he said.

Both Brauer and Levin said the new ambitions of GM may in fact make it an electrification leader, while goosing both the manufacturing and the adoption of electric cars.

"To succeed with EVs, you kind of have to bet the company. It sounds like that’s what they’re doing," said Levin.

"For me as an EV advocate, that’s really exciting," he added. "I want to see scale; I want to see EVs in every state and every market."