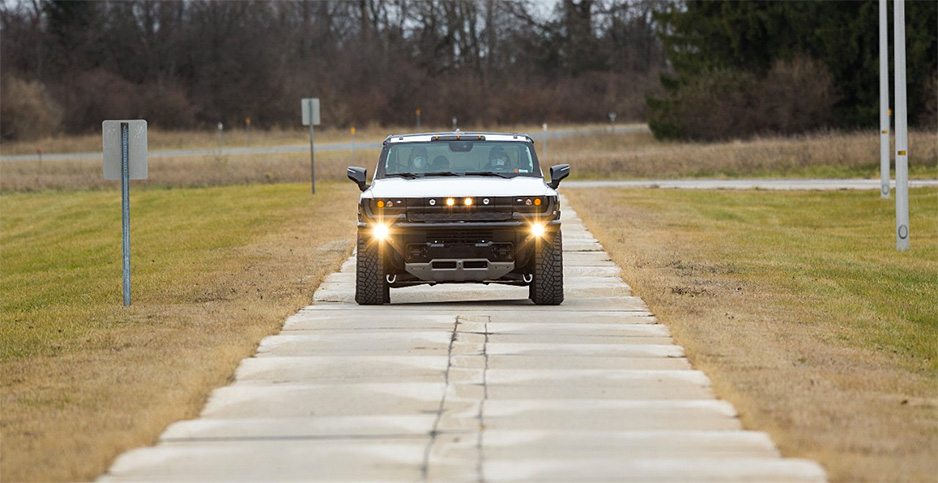 General Motors Co. said yesterday that it would stop selling gas-powered cars by 2035 and go carbon neutral by 2040, marking a milestone for one of America's biggest manufacturers. The GMC Hummer EV is pictured. Jeffrey Sauger/General Motors

General Motors Co., pioneer of the automobile and a pillar of American manufacturing, declared yesterday that it will stop making cars that run on gas.

That day won’t come until 2035, according to GM, but that hardly lessened the impact of an announcement set to shake the oil industry; the automotive supply chain that suffuses the economy; and the electric grid, which would need dramatic changes to fuel the onrush of electric vehicles.

"First of all, wow," said Barry Rabe, a professor at the University of Michigan and an expert on carbon policy.

GM also pledged to be carbon neutral by 2040 (Greenwire, Jan. 28). In a partnership with the Environmental Defense Fund, the automaker said it would get there by eliminating its tailpipes, growing use of renewable energy, and using some carbon offsets and credits.

The news arrived in a head-spinning week for electric vehicles and corporate carbon accountability.

On Wednesday, President Biden announced a flurry of climate action, including an intention to electrify the U.S. government’s vast vehicle fleet. And BlackRock Inc., one of the world’s largest investors, told companies Tuesday that it expects them "to disclose a plan for how their business model will be compatible with a net-zero economy" (Greenwire, Jan. 26).

Even amid these developments, GM’s pledge turned heads.

"This is a big flagship moment for American manufacturing," said Daniel Firger, who helped establish carbon standards in finance at Bloomberg Philanthropies and now works as the managing director of Great Circle Capital Advisors. "It’s getting lost in all the other news this week, but it’s a big signal to the economy."

The specifics of GM’s pledge relate to its cars and trucks, its use of electricity, and how it will track and reduce its enormous carbon footprint.

The automaker says it "aspires to eliminate tailpipe emissions from new light-duty vehicles by 2035." That would mean replacing a wide variety of internal-combustion engine vehicles, from the Chevrolet Malibu sedan to the burly GMC Canyon pickup truck, with electric versions.

A GM spokesperson said that goal was as firm as the automaker could make it, given that other players — suppliers, electric utilities and charging companies — make up critical parts of the transition. "We say it as an aspirational goal, because to actually make that timing, we need some external things to come together also," said spokesperson Jessica James.

GM has been building EVs longer than any other automaker, since the mid-1990s, and has resisted making them mainstream for almost as long. EVs were incompatible with the company’s multibillion-dollar investments in internal-combustion engine factories around the world.

That began changing quickly late last year, as the company aggressively teased a string of electric vehicles that now include a luxury sedan (the Cadillac Lyriq), a muscular SUV (the Hummer EV) and a delivery van ecosystem called BrightDrop. On Tuesday, it added to that list a hydrogen fuel-cell big rig it is developing with Navistar International Corp. (Energywire, Jan. 28).

GM recently said it would increase by a third its investment in EVs, to a total of $27 billion by 2025. By that year, it plans to have 30 pure-electric models in showrooms around the world.

Outside GM, a goal of all EVs by 2035 heaved into public view for the first time last fall, when California Gov. Gavin Newsom (D) issued an executive order setting it as the state’s timeline. States including Massachusetts and New Jersey have since laid the groundwork for setting the same goal.

While virtually every global automaker is on a schedule to introduce electric vehicles, none had committed to ending production of gas-powered vehicles until yesterday. Mary Barra, GM’s CEO, made it clear she expects company.

"General Motors is joining governments and companies around the globe working to establish a safer, greener and better world," Barra said. "We encourage others to follow suit and make a significant impact on our industry and on the economy as a whole."

Environmental groups latched onto the news from GM to pressure other carmakers to line up.

"Every automaker, including GM, will need to stop selling gas-powered cars no later than 2035 for us to avoid catastrophic climate change," wrote Wendy Wendlandt, acting president of Environment America, in a statement. "We will keep pushing the entire auto industry to innovate as fast as possible to protect our future."

GM’s other goal — more obscure but no less lofty — is to make itself carbon neutral by 2040. That one-ups America’s other major automaker, Ford Motor Co., which last summer set that goal for itself by 2050.

General Motors said it will work with the Science Based Targets initiative to monitor those goals. Hundreds of other companies house various goals within that group, including European automakers and auto suppliers like Volkswagen AG, Continental AG, BMW and Daimler AG.

GM’s commitments are vague and include few hard numbers. They encompass every part of its carbon emissions, including those it produces making cars, the power it uses in factories and the use of the vehicles themselves.

A full 75% of all those emissions, GM said, would be lopped off by electrifying its vehicles by 2035.

To make up the difference, it aims to buy only renewable energy in the United States by 2030 and around the world by 2035. The remainder would be made up with carbon offsets and credits. Those last tools are often criticized for masking a company’s actual climate damage.

That GM is working with the Science Based Targets initiative is a sign that it is taking its carbon commitments seriously, said Firger, who worked with Bloomberg Philanthropies.

"What you’re saying, publicly to the world, is that ‘we are committed to building a strategy,’" Firger said. GM, he said, has "now publicly put themselves on the hook for something that isn’t just throwing a dart at the dart board."

GM’s announcement presages challenges that may come to define the energy industry’s next decade.

GM’s phasing out of gas tanks is bad news over the long term for the oil industry. Transportation last year made up 68% of the country’s oil use, according to the U.S. Energy Information Administration, and light-duty vehicles, like the ones GM is converting, account for more than half.

The American Petroleum Institute, a leading oil trade group, suggested customers, not automakers, should be driving any vehicle transition.

"This is a free market, and every auto company is going to do what makes sense for their customers and their business model. Ultimately, it should be up to American consumers to choose what kind of car they want to drive," said Frank Macchiarola, API’s vice president for policy.

Most Americans have never been behind the wheel of an electric vehicle, and their appetite for EVs is a question mark.

GM is chasing not just drivers, but also investors who have swooned for EVs recently. A bevy of EV-related businesses are turning into public companies, riding a wave of enthusiasm created by Tesla. In the last several months, Tesla’s stock has risen 700%.

Wedbush Securities analyst Dan Ives said GM’s plan "is a very bullish signal for the EV sector domestically and we believe is a shot across the bow at Tesla and other EV players that GM will be aggressively going after EVs and is not just talking the talk."

A bold goal doesn’t erase some of the underlying problems with electric vehicles: Their range is limited, and they are still more expensive than gas-engine cars. EVs’ fueling system is in its infancy, and the battery takes far longer to fill than a gas tank does.

"Right now, an EV isn’t practical for a multiday camping trip to the middle of nowhere, and it’s far from the most efficient way to transport cargo across the country," said Karl Brauer, an auto analyst for iSeeCars.

"Even the average consumer has to carefully plan a cross-country trip in an EV, and that includes Tesla owners."

Having every GM vehicle be electric by 2035 would also necessitate sweeping changes for the electric utility industry.

A world crowded with restless electric vehicles and their big batteries would need a vast number of charging stations, almost none of which have been built. Plugging in thousands of cars could fundamentally alter the grid’s patterns.

And while Biden has made the development of EVs a central part of his climate push, the need could outpace his plans. A new study from California suggests that Biden’s goal of building 500,000 charging stations this decade may be woefully inadequate (Energywire, Jan. 25).

"Utilities are going to need to make significant investments in infrastructure to accommodate this," said Paul DeCotis, a former New York state energy official and an analyst for West Monroe, a consulting company.

As recently as 2019, GM seemed fixated on guarding its gas-powered turf. That is when it, Toyota Motor Corp. and Fiat Chrysler Automobiles NV sided with the Trump administration in stripping California of its ability to set its own vehicle emissions standards.

Those standards have played a key role in developing electric vehicles, including decades of early models from GM.

In response to GM’s embrace of former President Trump’s agenda, the Environmental Defense Fund wrote at the time that it was "disappointed that these auto companies have chosen to attack the long-standing authority of U.S. states to reduce dangerous pollution from cars and passenger trucks."

In November, just weeks after Joe Biden’s victory over Trump, GM reversed itself and dropped its support for the Trump effort.

Moreover, GM will be working with its once-critic on the plan.

The Environmental Defense Fund did not disclose exactly how it will work with GM, but it did say in an email that "EDF staffers have been in extensive discussions with GM staff, and those talks led to the shared vision reflected in today’s announcement."

"These discussions will continue for as long as GM’s plans move forward with the seriousness of purpose we have seen so far," spokesman Eric Pooley said in an email.

Britta Gross, who headed GM’s advanced vehicle program, including electric vehicles, for 17 years, described the automaker’s turnaround as a historic shift. In 2019, she decamped to the nonprofit Rocky Mountain Institute.

"When I was at GM, there was a real will to drive forward with zero emissions. The will was there, but maybe the courage wasn’t there, and the pieces weren’t in place," she said in an interview yesterday.

Now, she said, "these pieces are starting to fall into place" for America’s largest automaker. Its move toward EVs will affect the work of its 164,000 employees and its imprint around the world.

"If I’d known they were going to make this announcement, and all the other ones they made in the last few months," Gross said, "I would have stuck around."