GM’s new charging network is less than it seems 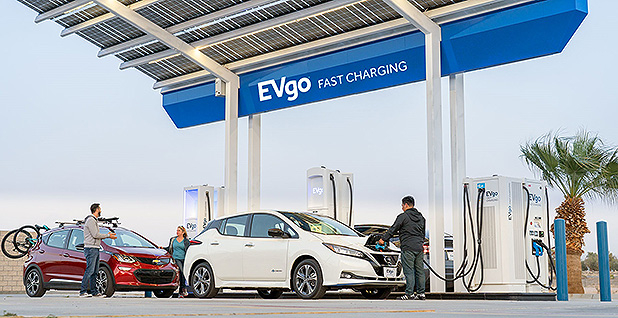 On its face, it’s one of the biggest commitments ever to a U.S. charging network by an automaker. Looking deeper, though, GM’s role is less than it might seem — and underscores how difficult building an electric fueling network really is.

GM, America’s largest automaker, won’t own or operate the stations. It won’t subsidize the electrons they deliver, or receive any of the charging revenue. GM’s customers won’t have special access to them, and their vehicles won’t fuel any better or worse than a Nissan or a Ford. The stations might not even have GM’s name on them.

GM’s electric plans have been under the microscope lately. On an investor call late last month, an analyst asked CEO Mary Barra whether she would consider spinning off the automaker’s electric business, to which she replied, "Nothing is off the table."

That option has excited some on Wall Street, who see an investor hunger for GM’s EV business in the wake of soaring valuations for Tesla Inc. and Nikola Corp., as well as a wave of fledgling EV makers moving to become publicly traded companies, including Lordstown Motors Corp., Canoo and Fisker Inc. Even Barra’s mild suggestion of an EV spinoff has sent GM’s share price higher in recent weeks.

Whether it intends to spin its EV business off or not, GM has committed to spending $20 billion on building EVs. It won’t say how much it intends to put toward constructing this new fueling system. The automaker has pegged the deadline for both the vehicles and the new fueling network at 2025.

Charging stations are expensive to build and, with EVs still a sliver of the autos on the nation’s roads, are far from a sure-fire investment. That has companies like GM and EVGo leaning on others’ largesse to create the electric fueling network that could enable EVs and curb climate change.

It is also "not the only part of the puzzle," as Alex Keros, GM’s lead architect for EV infrastructure, said in an interview, referring to the weighty task of charging the millions of electric vehicles on future roads. Plugs and wires in residential garages, at workplace parking lots, and at depots for commercial trucks and buses all need to be scaled up.

So what exactly is GM’s role in building these stations? And what does it want?

GM’s teammate, EVgo, wins big with the deal. The deployment would triple the size of its network, a vast expansion for a decade-old company whose growth until now has been slow and steady.

"When you look at those who don’t have an EV yet and want to get into that system … the charging is a concern," said Stephanie Brinley, an automotive analyst at IHS Markit.

Indeed, those 2,700 stations that EVgo hopes to build are also meant for two sets of drivers who might really need them: apartment dwellers who don’t have garage spaces to charge in, and ride-hailing drivers who drive a lots of miles and need to fuel often.

The information comes from OnStar, an opt-in subscription service of GM that taps a car’s telematics to track a stolen vehicle, do onboard navigation and run over-the-air diagnostics. EVgo and GM say the data will be scrubbed of any driver identity.

They will fill a car battery faster than most fast chargers now on the roadside. Today’s fast chargers typically deliver 50 kilowatts of power, but the future network will juice at 100 to 350 kW. The Cadillac Lyriq, due to hit showrooms in three years, will charge at more than 150 kW.

To guess, open a map "and go to the top 40 MPAs" — metropolitan planning areas — he said. "It wouldn’t be one-for-one, but it would be pretty close."

In each of those cities, the network will be intended to serve the whole, patching the gaps where existing charging stations are now. They are also likely to be numerous. "There isn’t one city where there’s going to be one charging station," Keros added.

Whether the network will actually be built is far from certain, since some of GM’s prior charging initiatives have gone cold.

While Volkswagen’s network is being built with required dollars under court order, GM’s is being made mostly on goodwill, with the hope that governments, utilities and others will chip in.

"The biggest question is, will this happen? Will they get to 2,700 [chargers]?" said Stacy Noblet, a senior director of transportation at consulting firm ICF. "That’s a lot to do in five years."