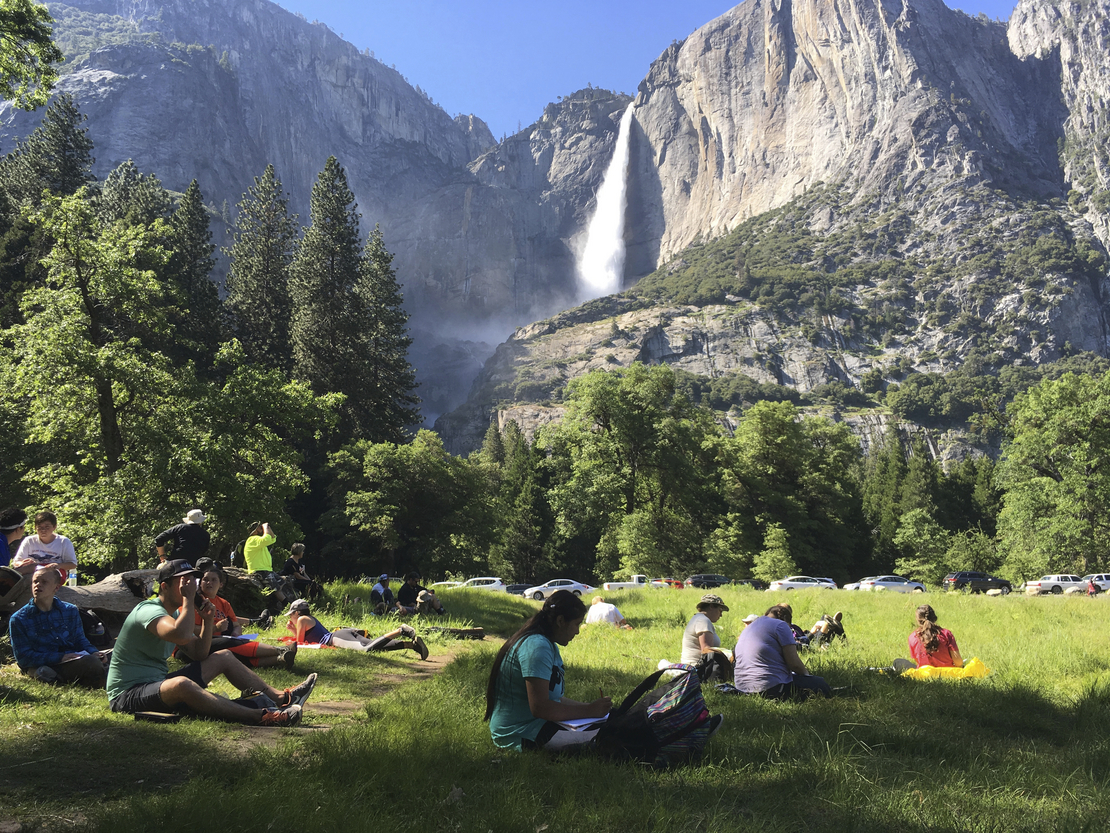 In this May 25, 2017, file photo, a class of eighth grade students and their chaperones sit in a meadow at Yosemite National Park, Calif., below Yosemite Falls. Scott Smith/AP Photo

The Interior Department starting this week on Veterans Day will begin issuing free lifetime passes to national parks and other federal recreational lands for military veterans and members of Gold Star families.

The new lifetime passes are courtesy of the Alexander Lofgren Veterans in Parks Act, approved by Congress in December 2021. It codified into law a 2020 National Park Service policy that authorized free lifetime access to military veterans and Gold Star Family members who are immediate relatives of a service member who died while serving the nation during a time of conflict.

The law — named for Lofgren, a former Army combat engineer who served in Afghanistan more than a decade ago and died last year — represents a major expansion of existing policies in place since May 2012 that offer free annual passes to federal lands for active-duty service members and their families.

The new lifetime passes authorized in the law apply to more than 2,000 national parks, wildlife refuges and national forests, as well as national conservation areas overseen by the Bureau of Land Management and other agencies.

“We have a sacred obligation to America’s veterans,” Interior Secretary Deb Haaland, whose father served in the Marine Corps during the Vietnam War, said in a statement. “This new lifetime pass is a small demonstration of our nation’s gratitude and support for those who have selflessly served in the U.S. Armed Forces.”

Starting on Veterans Day, which is Friday, military veterans can pick up the lifetime passes at the entrance to any eligible federal recreation area by presenting a military ID, such as a Veteran Health ID, or by showing a veteran’s designation on any state-issued driver’s license.

Gold Star Family members need to “self-certify” they are eligible and then download a voucher on the U.S. Geological Survey website, according to the Interior Department.

The lifetime passes cover entrance fees for the passholder and up to three adults at sites that charge per person, as well as amenity fees at national forests and at sites overseen by BLM, the Bureau of Reclamation and the Army Corps of Engineers.

“Our national forests and grasslands represent so much of the beauty of the nation our brave service members have sacrificed so much for,” said Agriculture Secretary Tom Vilsack in a statement. “Though they can never be fully repaid, by connecting the families of the fallen and those who served with these iconic places, we can, in a small way, say thank you.”

Lt. Gen. Scott Spellmon, chief of engineers at the Army Corps of Engineers, added, “This is a small token of appreciation for veterans who have bravely dedicated their lives to defending our freedom.”

Correction: A previous version of this story misspelled the name of Alexander Lofgren based on inaccurate information provided by the Interior Department.