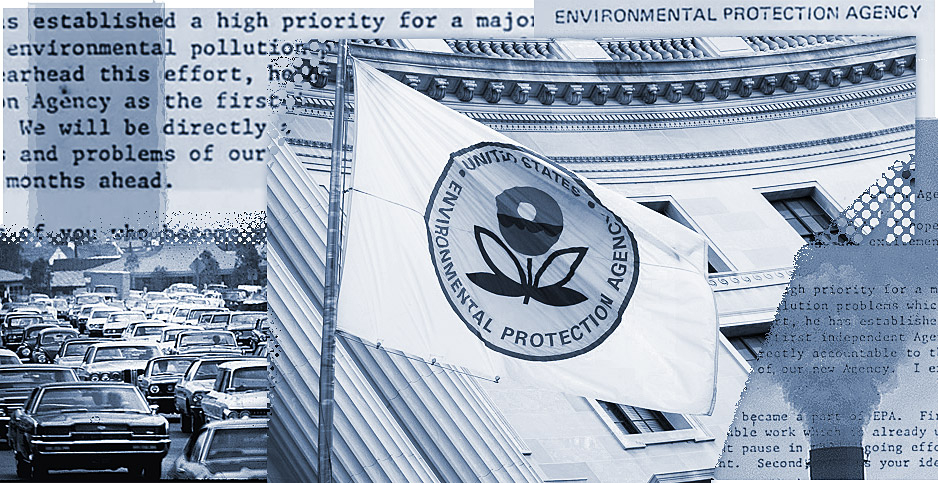 Part of a series.

EPA celebrates its 50th anniversary today as the agency readies for a coming year of stark change and new leadership.

William Ruckelshaus was unanimously confirmed by the Senate as EPA’s first administrator on Dec. 2, 1970, considered the agency’s birthday. Now, 50 years later, EPA awaits a new administration that could revitalize the agency and empower it in the fight against climate change and for environmental justice.

It will be a reversal in trajectory for EPA after four years of upheaval and tumult under the Trump administration. Environmental regulations were rolled back, budgets were put on the chopping block and hundreds of staff left the agency in dismay over EPA’s course.

Stan Meiburg, who served at EPA for 39 years, including as acting deputy administrator during the Obama administration’s later years, told E&E News the agency’s Year 51 will center on regaining trust.

"I think the biggest challenge is going to be restoration of public confidence in the agency," said Meiburg, now a director of graduate studies in sustainability at Wake Forest University. "We have had a period of where the perception that factors other than science and protection of public health were driving decisionmaking at the agency."

"There are periods of innovation and reform and new enterprise in the history of EPA, and then there are periods of reaction and consolidation and to some degree reconsideration," Reilly told E&E News, adding, "We have just seen an exaggerated example of the latter."

Reilly said, "I think just cleaning up after the past four years will take considerable time and attention, and it has to be done."

He said air quality has improved, Superfund toxic waste sites have been delisted, an updated Lead and Copper Rule is close to being finalized, and "we have accessed more in civil penalties, criminal fines and restitution than the agency collected in the first four years of the Obama administration."

"Our record speaks for itself," Hewitt said.

Before any change in policy takes place at EPA, personnel will need to change, too. Much of the agency’s 51st year could focus on those confirmation battles.

As President Trump’s appointees leave EPA, President-elect Joe Biden will have to put in place his own team, including nominees for administrator, deputy administrator and general counsel as well as heads of the agency’s air, water, enforcement and solid waste offices, among others. Those picks for top positions will have to pass Senate muster.

That won’t be easy, especially if the upper chamber remains in Republican hands after the Georgia runoff races on Jan. 5.

Christine Todd Whitman, who led EPA from 2001 to 2003, told E&E News she didn’t think there would be much pushback for Biden’s pick to lead EPA.

"I would certainly hope that the Republicans would honor the tradition of giving a president-elect their choices in the Cabinet unless someone is obviously terribly unqualified," Whitman said. "This is something that has gone on forever. That the president is the one who was elected, the president has a right to put together his team, and this is just the way it’s always worked."

Plans at the ready

Beyond the nomination fights, EPA in its 51st year will have to boost its budget, rebuild staff and unravel new regulatory procedures established by the Trump administration, former EPA officials say.

Betsy Southerland, who served 33 years at EPA, including as director of the Office of Science and Technology in its water office, said the agency should focus on the repeal of rules on "science transparency," Clean Air Act cost-benefit analysis and guidance documents. The first two are not yet finalized but are expected to be before Biden’s inauguration.

"Those three rules have a major impact on future regulations and guidance," Southerland told E&E News. She also said the new administration will have to prioritize actions dealing with "the most significant and pervasive public health and environmental risks, particularly the risks to communities disproportionately impacted by pollution."

Southerland is part of the Environmental Protection Network, a group of former EPA officials who have opposed the Trump administration’s plans for the agency. EPN put together a series of recommendation papers, calling for a "reset" by the next administration.

The plan calls for a hike in EPA’s annual budget to $11.4 billion — a sharp rise from the nearly $9.1 billion it currently receives. The group’s report also makes recommendations on how to better protect air, climate and water as well as clean up Superfund sites and evaluate risks from chemicals.

Yet "the biggest difference will be tone," Meiburg, another EPN member, said of the upcoming changes.

"There have been very few announcements from the current administration that were not framed in a political way. They were either an attack on the Obama administration or an attack on California," Meiburg said. "I think these will be framed now in a way that these are policies that will benefit everyone."

Addressing climate change is also expected to take on greater importance next year.

The Climate 21 Project put together a memo for Biden’s transition team on how EPA can "resume its leadership in the fight against climate change."

The document includes goals for the administration’s first 100 days and even its first day, like directing EPA’s air office to launch rulemakings for light-duty vehicles and the power sector as well as work with California on its Clean Air Act waiver so it can draft tougher emissions standards.

One of the memo’s co-authors is Joseph Goffman, once a senior EPA air official and now a member of Biden’s EPA review team.

"Climate change is going to be No. 1 on the president-elect’s list," Whitman said. "That’s something that’s just clear. There’s no question about it. There’s going to be a quantum sea change."

But the agency should anticipate political head winds as it seeks to tackle broad challenges.

Marcus Peacock, who served as deputy EPA administrator during the George W. Bush administration, said now the biggest environmental problems have no national boundary, such as carbon dioxide emissions or ocean plastic waste, or blend in to other broader societal issues, like environmental justice.

"Either EPA’s legal authority has to expand and be updated or EPA needs to stick to completing its traditional knitting and another authority (perhaps with EPA’s assistance) needs to address these modern, arguably more difficult, problems," Peacock, now chief operating officer for the Business Roundtable, told E&E News in an email. "Either approach has been, and will continue to be, politically difficult to achieve."

‘A return to normalcy’?

The Biden administration will also have to energize an EPA workforce sapped of morale.

One EPA employee told E&E News of the toll the Trump administration had on colleagues, with staffers complaining of not being able to sleep, drinking too much, and being on edge in their personal and professional lives.

"People work at EPA for the mission. And to have spent this time defending that mission while being treated abominably," said the employee. "Four years was tough. Eight would have been unbearable."

Biden’s election, however, may have stopped an exodus in EPA staff. Some employees said they thought fewer people will now leave the agency.

"Absent a change, there would have been an enormous departure of a number of [Senior Executive Service] and career people with decades of experience from the agency," an EPA manager told E&E News.

Career staff members also say they are looking for better relations with the new political leadership.

"I think people are looking forward to a return to normalcy and to a time that career staff are asked for and encouraged to provide their candid assessments of particular policy and legal choices," the manager said. "That has not happened with any regularity over the past four years."

The employee added, "I don’t think the new administration is going to have to do much at all. They know what we have been going through. Just come back and say they’re going to help us fix things."

Biden’s EPA will also be pushed by its workforce to confront environmental problems.

"We just can’t have leaders in place who are giving lip service to the perils of the climate crisis — we need true believers. If we don’t get them, the rank and file are prepared to show the way," Cantello said.

EPA also may fully reopen its offices during the Biden administration. Most agency employees have been working from home since March as the COVID-19 pandemic took hold, although EPA has begun a phased approach to reopen.

Cantello and other union officials have pushed for all EPA employees to have access to a vaccine before being asked to return to the workplace.

Asked about the Biden administration’s reopening plans, Cantello said, "One would hope there will be a complete rethinking, in which EPA worker safety would come first."

EPA’s 50th anniversary comes at a strange time, during the lame-duck period after Trump lost the election and with most employees teleworking due to the pandemic.

Yet, EPA this afternoon is holding a celebration to honor the milestone for an agency Trump long disparaged.

EPA chief Wheeler invited EPA employees to join him to celebrate the agency’s birthday and "the grand opening" of the new William D. Ruckelshaus Conference Center in the Federal Triangle complex.

"Due to the COVID-19 pandemic, the event will look different than what we previously imagined, with the majority of employees participating virtually. Nevertheless, I look forward to us coming together to honor this historic accomplishment," Wheeler told staff in an internal email obtained by E&E News.

EPA employees told E&E News they were conflicted about the celebration, considering this administration’s moves to gut agency programs during its tenure. Several said they will still participate, but others will not.

"I do not plan to attend," said one EPA staffer. "While it is nice to celebrate this landmark, I just have no interest with celebrating anything with this administration."

Going forward, Reilly said EPA will have to grasp with the best way to define itself.

"I think the biggest challenge is to define its mission in a way that accommodates both its regulatory responsibilities, its statutory obligations, but also its environmental messaging," Reilly said. "I think properly seen, EPA is the closest thing to an environmental conscious that America has. It always struck me it is as much communication as it is anything else."