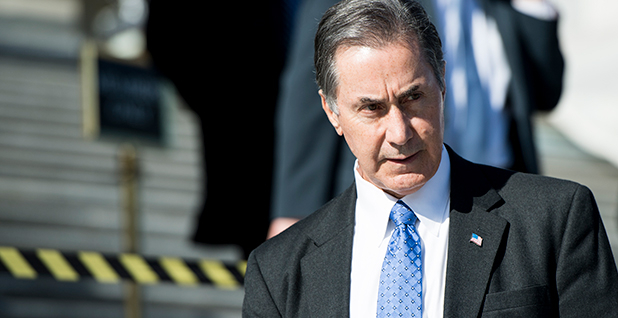 Rep. Gary Palmer (R-Ala.) is among the Republican members of the new House Select Committee on the Climate Crisis. Bill Clark/CQ Roll Call/Newscom

Most of the six Republicans assigned yesterday to a new House committee on climate change have a history of either doing little to confront global warming or have opposed efforts outright to address the causes and consequences of a hotter planet.

They include freshman Rep. Carol Miller (R-W.Va.), who defended coal as "clean" this week on Twitter, and Rep. Morgan Griffith (R-Va.), who rallied his colleagues in 2015 behind a letter that criticized the Obama administration for its plans to send money to a U.N. climate fund.

Rep. Gary Palmer of Alabama, another GOP member named to the House Select Committee on the Climate Crisis, introduced a bill four years ago that aimed to stop EPA from regulating greenhouse gases.

"The EPA has repeatedly claimed fighting climate change as justification for crafting onerous regulations that limit carbon dioxide, water vapor, and other compounds that are both essentially harmless and in fact required for life to flourish," Palmer said in a statement at the time.

Some on the left already have derided the new climate committee as toothless — in large part because the panel led by Rep. Kathy Castor (D-Fla.) won’t have the power to issue subpoenas or move legislation (Climatewire, Jan. 2).

The panel’s GOP members are unlikely to assuage concerns about the committee’s long-term effectiveness.

"It is a dereliction of duty for Republicans to have named members to the Select Committee on the Climate Crisis who have questioned the validity of long established climate science and have accepted hundreds of thousands of dollars from polluting fossil fuel interests," Sara Chieffo, vice president of government affairs at the League of Conservation Voters, said in a statement.

In addition to Griffith, Miller and Palmer, the three other Republican members are Reps. Buddy Carter of Georgia, Kelly Armstrong of North Dakota and Garret Graves of Louisiana.

On at least two occasions, Carter has questioned in local media how much of climate change is caused by humans.

In a statement issued yesterday, he acknowledged the threat of global warming but warned of responses that were "job-killing, too expensive, not actually effective and even completely unfeasible."

"I’m a member of this committee because I want to work with my colleagues on both sides of the aisle to create solutions to address climate change that are realistic, market-based and will actually have an impact on climate change," Carter said.

Graves, who worked with the administration of former Louisiana Gov. Bobby Jindal (R) to try to prepare the state for rising sea levels, will serve as the committee’s top Republican (E&E Daily, April 26, 2016).

He was described by several environmental groups as a potential bright spot.

"The most important decision was the designation of Congressman Graves as the ranking Republican," said Alex Flint, executive director of the Alliance for Market Solutions, a conservative group that touts the benefits of a carbon tax to address global warming. "Graves has acknowledged climate change, and he will set the tone for Republicans on the committee."

Steve Valk of the Citizens’ Climate Lobby added: "Graves appears to be a good pick for ranking member. His district faces many challenges with climate change, and he’s expressed the need … for action."

In a statement, Graves highlighted the importance of a holistic response to global warming.

"The entire climate debate covers only part of the whole equation," he said. "Energy production and consumption, mitigation and adaptation, and shared responsibility must be discussed if we’re truly going to be ‘global’ in this important conversation."

None of the Republican lawmakers named to the committee — including Graves — has a lifetime score above 6 percent with the League of Conservation Voters.

Nor did any of them who served in Congress last session join the Climate Solutions Caucus. Although that bipartisan group hasn’t accomplished much legislatively, its members at least have raised concerns about global warming.

"It’s a bit puzzling that none of the Republicans who were on the Climate Solutions Caucus were named to the climate committee," Valk said. "They were the ones who were most proactive on climate change, and their presence on the new committee would have been a positive sign."

In the case of Armstrong and Miller, their absence from the Climate Solutions Caucus and their nonexistent scores with the League of Conservation Voters are because both lawmakers are freshmen. But each has opined on climate or energy issues in recent weeks.

Miller savaged the "Green New Deal" in an opinion piece this week. She wrote that the liberal-led plan to fight climate change with a massive jobs program was "nothing more than societal engineering with the intention to restart Obama’s War on Coal."

And in a related Twitter post, she voiced support for coal — a key contributor of the carbon emissions behind global warming. "It is important to remember that today coal is clean, affordable, dependable and allows our country to be self-reliant," she wrote.

As for Armstrong, he told E&E News in January that he doesn’t deny the scientific consensus on climate change but added that the U.S. shouldn’t move forward unless "you get the entire world to deal with it" (E&E Daily, Jan. 11).

In a follow-up statement yesterday, he made a similar point.