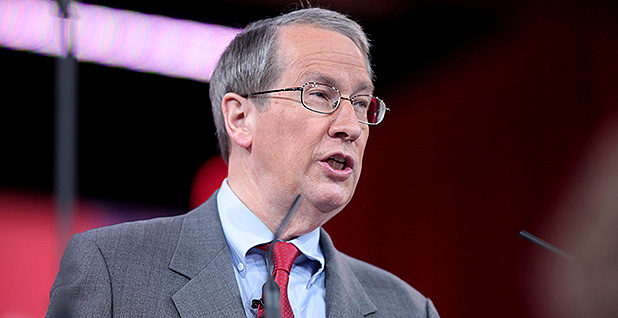 Republicans are taking advantage of a new administration that’s likely to be friendlier to their efforts to push a number of bills aimed at reforming the legal system.

Much of the push has taken place in the House Judiciary Committee. The panel has held a number of hearings on the subject and approved several bills that would spell big changes in how lawsuits are brought and resolved, and in the amount of money that attorneys can recover.

But outside of Judiciary, conservative lawmakers in both chambers have also introduced bills targeting specific issues in the environmental arena, such as endangered species and clean water. Many would altogether block judicial review of controversial agency actions.

Supporters see the bills as a much-needed crackdown on abuse in the judicial system.

There are "long-standing problems" with the courts, said Matt Webb, senior vice president of legal reform policy at the U.S. Chamber of Commerce, ticking off class-action suits, frivolous lawsuits, forum-shopping and "over-enforcement" in civil environmental litigation.

"There has been an effort to use litigation as a way to regulate in the environmental space and other areas," Webb said. "And unfortunately the litigation system is not designed to do or handle large-scale regulatory problems. It’s designed to address discrete issues."

But environmentalists and progressives see a broad, troubling effort by the GOP — hidden behind innocuous-sounding names like the "Lawsuit Abuse Reduction Act" and the "Discouraging Frivolous Lawsuits Act" — to make it harder for citizens to access the courts and resolve litigation.

Environmental groups that frequently sue the government on behalf of citizens have upped their advocacy on the issue.

"We view each of these as being a piece of this broader tapestry that’s all about chilling and discouraging members of the public from bringing cases to vindicate their rights in court," said Patrice Simms, vice president of litigation at Earthjustice.

Bills to reform the judicial system or restrict judicial review of agency actions are hardly a new phenomenon in Congress.

Several of the bills proposing changes in the broader legal system, in fact, passed the House mostly along party lines during the Obama administration but stalled in the Senate and never made it to the president’s desk.

"They just didn’t pass the Senate because it’s harder to pass things in the Senate," said Pamela Gilbert, a partner at Cuneo Gilbert & LaDuca LLP who has advocated on behalf of consumers in Congress since the mid-1980s. "And everybody knew or assumed that President Obama would veto them. So the Senate didn’t want to waste its time."

Though the Senate has yet to seriously consider any of the legislation pushing broader changes in the legal system, supporters see an opening with President Trump in the White House.

Judiciary Chairman Bob Goodlatte (R-Va.) has led the effort on the House side (E&E Daily, Feb. 2). In the past half year, his committee has approved at least 10 pieces of litigation under a judicial reform agenda.

The legislation includes bills that would impose mandatory sanctions on attorneys who file "baseless" lawsuits, set restrictions on groups of people who can file class-action lawsuits, bar settlement dollars from going to third parties and move certain cases against corporations from state to federal courts.

The Judiciary chairman scored a key victory in June when Attorney General Jeff Sessions issued a memo prohibiting the Justice Department from requiring parties to give money to third-party, nongovernmental entities as part of settlements.

Most recently, the Judiciary Committee approved H.R. 469, a bill that’s aimed at countering the "sue and settle" phenomenon in which GOP critics say special interests sue friendly agencies in order to force them to issue new regulations.

"Although the Trump administration is delivering regulatory relief, without the help of statutory reform, relief may only be temporary, not permanent," Goodlatte said of the need to enact legislation.

So far, the full House has passed at least seven of the bills or included similar language as part of larger pieces of legislation.

Several are top priorities of the Chamber of Commerce’s Institute for Legal Reform. The institute, which is celebrating its 20th anniversary next year, has long pushed reforms at the state level. In 2005, it achieved a major victory on the federal level with the enactment of the Class Action Fairness Act, which gave federal courts more power over class-action claims and increased scrutiny of class-action settlements.

"What these bills are designed to do is restore a sense of fairness in the legal system," Webb said.

But Democrats have slammed the bills both individually and broadly.

The GOP is pushing legislation that would make it "harder and more expensive for Americans to use the courts to compel government agencies to uphold and comply with the law," Rep. Val Demings (D-Fla.) said at a hearing earlier this week in the House Oversight and Government Reform Committee on "sue and settle."

And critics say that imposing mandatory sanctioning on attorneys for frivolous lawsuits, one of the pieces of the GOP reform package, has failed in the past.

Mandatory sanctioning was in place from 1983 to 1992 but was repealed after it was shown to increase nonmeritorious lawsuits. In short, courts became overburdened by having to deal with motions relating to sanctions.

Returning to mandatory sanctions as H.R. 720 would require "will have a disastrous impact on the administration of justice" by chilling lawsuits that raise novel legal arguments, said Rep. John Conyers (D-Mich.), the ranking member of the House Judiciary Committee.

While the bills considered by the Judiciary Committee seek broad changes in the judicial system, other legislation — including bills introduced in the Senate — narrowly targets lawsuits involving specific environmental issues.

H.R. 2693, introduced by Rep. Bruce Westerman (R-Ark.), for example, would send certain legal disputes over forest management actions to third-party arbitration, rather than to court, as well as limit the ability of courts to issue preliminary injunctions halting agency forest management activities.

The House Natural Resources Committee approved the bill in June. Sen. John Barrasso (R-Wyo.) has introduced legislation in the Senate that includes a similar arbitration provision.

A provision in a bill introduced by Rep. Tom Rice (R-S.C.), H.R. 1179, would require that losers in Clean Water Act citizen suits pay most of the legal expenses of the winners.

Environmentalists and progressives say they’re worried that the bills are designed to chill citizens’ willingness to bring claims against the government and against corporate polluters under environmental laws.

The loser-pays provisions, such as the one in the Rice bill, are "really nefarious," said Simms of Earthjustice, which often files litigation pro bono on behalf of citizens groups.

They would mean that citizens groups could potentially be on the hook for paying the legal expenses of big corporations that employ "multiple big Washington law firms who are charging $600 an hour for their representation," said Simms.

"What does that mean for the community group when we say, ‘Here’s what you need to consider for initiating this case’?" Simms said. "Well, what it means in most instances is they’re going to say we can’t take this. And that case simply isn’t going to happen."

On the other hand, Republican critics have long charged that environmental groups frequently bring lawsuits against the government and settle in order to line their pockets with attorneys’ fees. That concern is motivating at least some of the action in the House.

Farenthold is the sponsor of a measure included in the Judiciary Committee reform agenda that would put victims of asbestos-related disease who bring claims into a public database. The language was added to Goodlatte’s class-action bill that passed the House.

None of the bills, said Webb of the Chamber of Commerce, would bar "a legitimate claim."

"The ones that have a problem with this are the folks in the trial bar who want to engage in speculative litigation and use the power of the court system to force settlements even if real harm hasn’t been done," he said. "If you have a legitimate case, we’ve never had a problem with folks having access to the courts."

Groups gird for the new order

Both supporters and opponents have sent a flurry of letters to Congress about the measures.

And in April, Earthjustice brought on Coby Dolan, who previously directed legislative affairs at NOAA and worked as a senior staffer for Rep. Debbie Wasserman Schultz (D-Fla.), to work on access-to-courts and deregulatory issues.

Dolan said that Earthjustice’s heightened focus on the issue came out of "soul-searching" that the group did after the November election.

"We felt like there’s a need to push back and point out that this isn’t just a one-off kind of bill or two or three," Dolan said. "It’s more of a broad effort to go after the way that people can access justice through the courts. I think you see more sophisticated attacks happening."

Dolan said that the group’s advocacy has consisted of meetings with lawmakers and joining coalitions with other progressive groups that are concerned about maintaining access to the courts.

"On the House side, from 2007 to 2015, we noticed an uptick but didn’t pay too much attention because this wasn’t going anywhere. It didn’t seem urgent," Dolan said. "All of that changed on Jan. 20."

The Center for Biological Diversity, a group that has so far filed more than two dozen lawsuits opposing the Trump administration’s deregulatory moves, has also recently taken on more of an advocacy role.

Last week, the group registered as a lobbying organization and listed on H.R. 3131, a bill by Rep. Bill Huizenga (R-Mich.) that would adjust hourly attorneys’ fees in Endangered Species Act litigation (Greenwire, July 25).

Joanne Doroshow, who heads the Center for Justice and Democracy at New York Law School, said that groups should pay attention not only to bills in the environmental arena but in other issue areas — such as efforts to kill a Consumer Financial Protection Bureau rule that makes it easier to bring class lawsuits against banks — because it’s a "slippery slope."

"Congress sometimes just tries to get its foot in the door in a certain issue area, establish precedent and then do more damage to the laws that exist," Doroshow said. "So it’s a dangerous thing to establish any kind of precedent."

Eyes turn to the Senate

Advocates on both sides are starting to turn their attention to the Senate. While the Senate Environment and Public Works Committee has acted on natural resources legislation, the upper chamber has yet to take up any of the broader judicial reform bills that have passed the House.

"The only thing preventing a lot of this stuff from becoming law is the legislative filibuster in the Senate," Dolan said.

Webb of the Chamber of Commerce said that there’s a "real interest" in the Senate to look at legal reform issues.

But up to now, the upper chamber Judiciary Committee has been consumed by nominations for the Supreme Court, lower federal courts and the Justice Department.

"The broader legislative agenda has probably been a little bit slower," Webb said, "but it’s not for lack of interest or desire to look at these types of issues."

Gilbert, whose current clients include the American Association for Justice, said that there’s a "very big learning curve" in the Senate, though, when it comes to judicial reform and access to courts because the upper chamber didn’t have to deal with these types of bills for the past eight years.

"This isn’t an issue of are we going to fund Medicaid, which is going to give health care to the poor," Gilbert said. "What we’re talking about are legal procedures which, unless you’re a lawyer who practices in that area, you have no idea even exists."

In the House, she added, "a lot of them end up passing because they’re so narrowly focused, and honestly they sound like mom and apple pie."