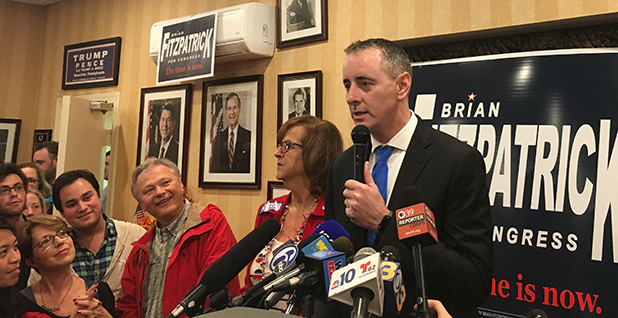 Rep. Brian Fitzpatrick (R-Pa.) spoke with supporters at a watch party in Doylestown, Pa., after winning re-election. Fitzpatrick is one of the few House Republicans who support a carbon tax. Ines Kagubare/E&E News

That was the chant that greeted Rep. Brian Fitzpatrick of Pennsylvania, one of the few House Republicans who back a carbon tax, here in Bucks County as it was announced that he had eked out a win.

Fitzpatrick, who never identified himself as a Republican throughout his campaign, defeated Democratic challenger Scott Wallace in a highly competitive swing district that has a tendency to vote for moderate Republicans. He won 51 percent to 49 percent, gaining fewer than 10,000 more votes than Wallace, according to the Associated Press.

Although a Republican by name, Fitzpatrick has run on some liberal issues — including climate change. In late July, he and Florida Republican Rep. Carlos Curbelo co-sponsored a carbon tax bill intended to combat carbon emissions and fund infrastructure. The proposal, known as the "Market Choice Act," would put a $24-per-ton tax on carbon, with 70 percent of the revenue going to the Highway Trust Fund.

Fitzpatrick was one of three Republicans to support the bill, along with Curbelo — who lost his seat last night — and Rep. Francis Rooney of Florida.

"We lost Carlos tonight. It’s heartbreaking … but I’m going to push [the bill] as hard as ever," Fitzpatrick said in a brief interview last night.

"He was my colleague on that bill, so now I’m going to find another partner that can help me on it," he added, though a number of GOP members of a bipartisan climate caucus fell in their re-election bids and voters in Washington state rejected a carbon fee ballot measure.

Wallace, who has been a staunch proponent of the environment and climate action, said in an interview with E&E News that he didn’t buy Fitzpatrick’s interest in climate change. He said that Fitzpatrick was just "showboating," given that House Speaker Paul Ryan (R-Wis.) brought up a resolution stating that under no circumstances would the chamber ever consider a carbon tax.

"Curbelo and Fitzpatrick introduced a bill which has zero chance of seeing the light of day," Wallace said. "This was a gesture aimed solely at one day, and that date is Nov. 6."

The rainy weather didn’t stop Regina Dudo and many other voters from casting their ballot yesterday afternoon. Although a carbon tax wasn’t on the top of voters’ minds yesterday, some had heard of Fitzpatrick’s support for the policy.

Dudo, 63, of Warrington — who has been a registered Democrat all of her life — cast her ballot for Fitzpatrick because of his support for funding public education.

However, she said climate change was another issue on which she was keeping a close eye.

"If we don’t keep up with climate change and emissions, our children in the future are going to suffer," Dudo said outside her polling location.

Jessica and Paul Giorgi of Warrington said they also voted for Fitzpatrick because he shares some of their conservative values, including being anti-abortion, supporting legal immigration and advocating for low taxes.

Paul Giorgi, who had heard about the carbon tax bill, wasn’t too keen about taxing industries on the amount of carbon they release in the air, but he said he would want to read the entire bill to understand more about how exactly businesses would be affected.

"I don’t know about a carbon tax, but I’d like to reduce emissions," Giorgi said. "I think there’s definitely some human impact on climate change."

Pennsylvania’s political landscape recently changed due to redistricting. The new boundary lines of the 1st District favor Democrats more, Wallace said, but Democrats and Republicans usually split its votes. The current district includes most of Bucks County and some portions of Montgomery County.

The district is mostly suburban, with some rural areas in the western part of Bucks County, according to political science professor William Rosenberg of Drexel University. Rosenberg said the community is pretty diverse in terms of different political affiliations and professions — there are both blue- and white-collar jobs — making it challenging to win for both Democrats and Republicans.

Rosenberg also said that he thinks that moderates — whether Republican or Democrat — will have a hard time winning in future elections, especially in a political climate where most issues are polarized in the extreme direction.

"Even if he wins this time, it’s going to get constantly harder for him over time to get re-elected," Rosenberg said of Fitzpatrick.

He added, "I think we’re living in a very polarized world and people in the middle are going to get really squeezed … but maybe we’ll get to the point where moderates will be much more welcomed again, but I don’t see that happening real soon."