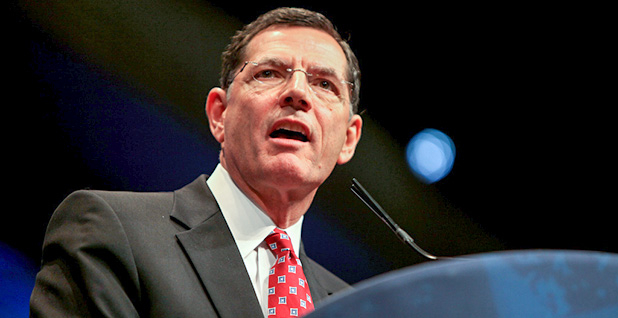 Senate Democrats — led by Sens. Tom Carper of Delaware and Ed Markey of Massachusetts — have been courting GOP lawmakers in their bid to urge President Trump to preserve the government’s fuel economy program for cars, sources told E&E News.

They’ve gotten the attention of Sen. John Barrasso (R-Wyo.), chairman of the Environment and Public Works Committee, who has worked on drafts of the letter.

Staff members on the committee have been sending language back and forth but have not yet reached a consensus, according to congressional aides. A draft copy obtained by E&E News tells Trump to "do everything possible to enable the continued success of the national fuel economy program."

At least one copy of the letter sought to include Sen. John Thune (R-S.D.), chairman of the Commerce, Science and Transportation Committee, with jurisdiction over the Transportation Department.

Snagging the support of two GOP chairmen would represent a coup for the Democrats in a chamber where bipartisan consensus on energy issues is far from common. Their potential involvement reflects concerns that delaying a decision on the standards could create burdensome uncertainty for regulators and automakers.

Mike McKenna, a former member of the Trump transition team and the founder of MWR Strategies, called the staff discussions a "big middle finger" to Trump.

"Two Republican chairmen basically telling the administration don’t touch this stuff — it would be a declaration of war," he said.

Still, a Democratic aide said it was unclear if the letter would ever come to fruition.

And a spokesman for Barrasso said he had not yet signed onto the letter.

"Multiple senators have shown an interest in supporting an open and transparent process as DOT and EPA address vehicle standards moving forward," Barrasso aide Mike Danylak said in an email. "However, consensus on language in any potential letter on this issue has not been reached. Chairman Barrasso will only send a letter if it supports policies that he is in favor of and that are also supported by the administration."

Top administration officials have not yet agreed how far the rules should be rolled back.

Trump announced in March that he would reconsider U.S. EPA’s greenhouse gas standards for vehicles for model years 2022 to 2025 in order to boost the economy. The White House has yet to begin direct negotiations with California over the standards but has hinted it will reach out to avoid a "patchwork" of regulations.

EPA Administrator Scott Pruitt boasted of the carbon reductions achieved by the vehicle rules, calling them the "greatest progress" the United States had made toward controlling greenhouse gas emissions. He said that progress would continue. Pruitt and Transportation Secretary Elaine Chao have said they expect to make a decision on the stringency of the standards by April 2018.

California and the dozen states that have adopted its clean car program have vowed to continue their own version of the tailpipe rules, and they vowed to sue Trump if he moves to roll back the federal standards.

"There are many energy and environmental issues on which the undersigned senators do not all agree," the draft says. "But we all agree that a failure to reach a negotiated agreement on [model year] 2022-2025 fuel economy and tailpipe standards for cars and light trucks that has the support of federal regulators, the state of California and stakeholders that support the current standards will likely lead to the end to the single national set of standards to which companies must comply, and protracted litigation, outcomes that benefit no one."

President Obama stood with major automaker CEOs, unions, environmentalists and representatives from California in 2011 when he announced the fuel efficiency rules through 2025. They were projected to bring average fleetwide fuel economy to 54.5 mpg.

Auto manufacturers are split on whether and to what degree to adjust the stringency of the 2022-25 requirements (Climatewire, March 13). They say they will seek to increase fuel efficiency but might not be able to meet the timeline for improvements set up by the Obama administration.

The major manufacturer trade lobbies have asked regulators for tweaks to smooth over the National Highway Traffic Safety Administration and EPA programs.

The NHTSA is weighing the tweaks as part of the rulemaking it is required to go through for 2022-25 fuel economy standards. Sen. Roy Blunt (R-Mo.) introduced a bill last month with bipartisan co-sponsors that would make similar modifications to the rules (E&E Daily, May 26).

Environmental advocates say changes could erase some of the emissions benefits.