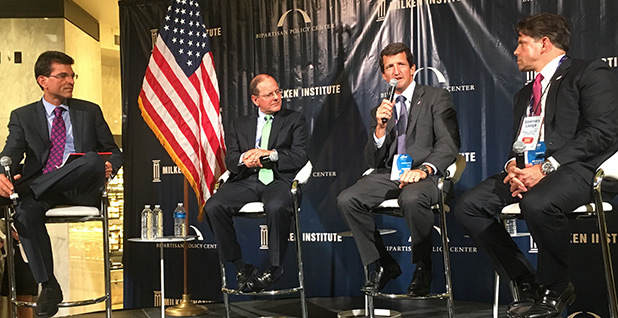 CLEVELAND — Republican activist Jay Faison, a North Carolina entrepreneur looking to prop up federal candidates who support "clean energy," is not sure he can support presidential candidate Donald Trump this fall.

"I want to see some real policy," Faison, 48, said yesterday during a discussion with energy influencers on the 21st floor of a hotel here.

Faison was the final Republican onstage to answer whether he would cast a ballot for Trump. He followed enthusiastic Trump supporter Rep. Kevin Cramer (R-N.D.), an adviser to the campaign. Faison said he did not know enough about the real estate mogul’s position on the issue.

"I’m not going to provide a lot of commentary on the Trump campaign, because to me, it’s a black box." Faison told Greenwire yesterday in a sit-down interview ahead of a full day of Republican National Convention-related events.

The founder of the nonprofit ClearPath Foundation and the ClearPath Action political action committee is pouring millions of dollars into federal campaigns this fall (Greenwire, July 19).

Faison is also investing in research and polling in an effort to find the next bumper-sticker slogan that will unify his party on energy issues.

"All of the above," which refers to an energy policy that promotes fossil fuels, renewable energy sources and increased efficiency, came out of the debate surrounding the Energy Policy Act of 2005. The same phrase made its way into both the Democratic and Republican party platforms in 2012.

Faison said ClearPath wants to roll out the "2.0 version" of that slogan, potentially sometime before November.

"I don’t think it’s going to change from ‘all of the above,’ but I think it will be something like a real and cleaner all of the above that incorporates American innovations, etc., etc.," Faison said.

Faison said his firm is still doing the research, but he thinks "it’s going to be something that puts meat on the bone of ‘all of the above’ and will also have real policy attached to it."

The conservative millionaire had a full schedule of forums and panel discussions at a convention where energy issues have been smothered by domestic security and criticism of presumed Democratic presidential nominee Hillary Clinton (Greenwire, July 20).

In addition to the lunchtime forum, he talked to a happy-hour crowd at an event sponsored by the Bipartisan Policy Center.

As the designated energy speaker, Faison got about five minutes to present his views on clean power technology. The host asked him one question about nuclear before moving on to other topics.

"Our energy systems are highly regulated, and in order to unleash innovation, we need two things: We need smart innovation, No. 1, and we need government support, basic research," Faison said at the BPC forum.

One topic in which Faison told Greenwire he has no interest: "how to talk to Republicans about climate."

The science is largely settled, and climate is too divisive in Washington, D.C., he said. Instead, Faison envisions a GOP platform that offers voters a broad menu of practical solutions and technology for cutting carbon emissions.

"On the clean energy side, the polling is overwhelmingly positive," he said. "So if we agree on the solutions, we don’t have to disagree on the problems."

Faison said he is not putting any effort into educating candidates about how to talk about climate. He also prefers face-to-face meetings, and claims to have met with 65 members of Congress this year. Faison contrasted his approach with those who are looking at psychology or linguistics.

"We know that clean energy, writ large, is a very safe and productive conversation to have across all segments of the party," Faison said.