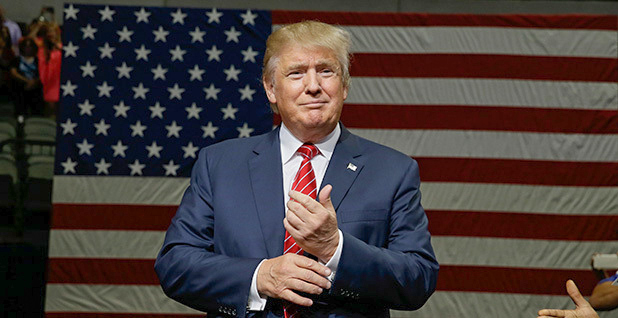 The GOP convention begins today in Cleveland, where delegates are expected to nominate billionaire real estate developer Donald Trump as the party’s nominee for president of the United States. Photo by LM Otero, courtesy of AP Images.

The decision signals a sense of foreboding about Trump’s candidacy by some of the party’s most visible supporters of tackling global warming. The group of lawmakers are working on a package of bills to cut greenhouse gas emissions by promoting clean energy and other programs that they believe could appeal to some conservatives.

The convention is seen as an uncooperative backdrop to those efforts. The four-day event is designed to build enthusiasm for Trump’s final push toward the Nov. 8 election by flooding the city with political stars. But there’s little excitement among the 11 Republicans. Trump’s rejection of climate science is at odds with their efforts to drain the issue of its sharp ideology. He has called it a hoax, a Democratic scheme to financially benefit the party’s supporters and an invention by the Chinese.

"He has a lot to learn," said Rep. Carlos Curbelo (R-Fla.) of Trump’s climate views.

The convention is sweeping through this lakefront city of brick warehouses and iron bridges. Monuments to its stronger past, like a massive tilting train trestle, unused now and layered with rust, decorate lavish parties for thousands of visiting politicians, activists and journalists thrown on pavilions along the Cuyahoga River. About 50,000 people are expected to visit this city of nearly 390,000 residents.

Climate change won’t be a featured topic. Issues like trade, the economy and national security will play an important role in the convention’s theme, "Make America Great Again." Speakers in the Quicken Loans Arena, nestled among century-old brick buildings downtown, will include party leaders and Trump supporters like Harold Hamm, the oil billionaire advising Trump’s campaign.

But Republican leaders on environmental issues won’t be giving speeches. Sen. Rob Portman, the Ohio Republican who supports Trump, said it would be a "boost" if the convention features energy efficiency. He’s pursuing legislation that would establish federal standards to save electricity.

"I’d love that. It would be totally appropriate," Portman said in an interview of highlighting the issue in Cleveland. "The context would be that we Republicans support an all-of-the-above energy strategy, including efficiency." He also said it would help address climate change.

The topic isn’t listed on the convention agenda.

Eight of the 11 House Republicans told ClimateWire they won’t attend the convention. The remaining three did not respond to inquiries. At least one who is skipping the convention ran to be one of the 2,472 delegates who will officially choose their party’s nominee. Rep. Ryan Costello of Pennsylvania gave the title away after Trump won the primary races.

Another lawmaker, Rep. Bob Dold of Illinois, felt personally insulted when Trump said Sen. John McCain (R-Ariz.) isn’t a war hero for enduring years of captivity in North Vietnam after his plane was shot down in 1967. Dold’s uncle, Robert Shumaker, was shot down two years earlier and spent eight years and one day as a prisoner of war.

"That’s not my belief," said Dold, who said he won’t vote for Trump because "he’s not my guy."

Together the 11 lawmakers hope to recalibrate the Republican Party’s views on climate. They tend to be younger and moderate lawmakers. Some are Latino. Two are women. Many of them come from battleground states that Trump needs to win in November. They unveiled their alliance last fall by introducing a resolution that breaks with Republican doctrine. It calls on the party to "balance human activities" that raise global temperatures.

Rep. Chris Gibson of New York led that effort. It took him and his allies months to find his 10 co-sponsors. Gibson, who is retiring from Congress after this year, didn’t respond to inquiries about his convention plans. But the former Army officer recently questioned Trump’s ability to be an effective commander in chief.

"I have concerns about giving that guy an army," Gibson said on a New York radio show called "Effective Radio with Bill Samuels."

It’s unclear if he and two other lawmakers in the group of 11 will attend the nominating party this week. Reps. Dave Reichert of Washington and Mike Fitzpatrick of Pennsylvania also didn’t respond to requests for comment.

Of the eight lawmakers who told ClimateWire they will not be here, four have said they won’t vote for Trump: Reps. Ileana Ros-Lehtinen of Florida, Richard Hanna of New York, Curbelo and Dold. Two of them said they would support the "Republican nominee," without using Trump’s name: Reps. Frank LoBiondo of New Jersey and Costello. It’s unclear if two others will cast a ballot for their party’s presidential candidate: Rep. Patrick Meehan of Pennsylvania and Elise Stefanik of New York.

"I won’t be voting for Trump or Hillary, but I congratulate the American people for voting for who they wish to vote for. That’s a good thing," said Ros-Lehtinen, who represents Miami.

Norman Ornstein, a congressional scholar with the American Enterprise Institute, said the 11 moderates have "nothing to gain" from attending the convention.

"First, it would be at least an implicit endorsement of Trump, which won’t help in any of their districts," he said. "Second, it would be likely at the convention that reporters and others would ask them some uncomfortable questions."

Costello of Pennsylvania is seeing that outcome without stepping foot in Cleveland. His Democratic opponent, Mike Parrish, has criticized Costello for not disavowing Trump’s divisive comments strongly enough.

"I think no matter what, Democrats are going to tie every Republican to him because, candidly, they don’t really have much of a message," Costello said in an interview.

But some Republicans acknowledge that Trump’s message is lacking, too. Portman, who is facing a tough re-election fight, said it’s important to tell voters how Republicans will address climbing temperatures. That likely won’t include carbon regulations on power plants. But the party could be swayed by programs to conserve energy and encourage technological breakthroughs, he said.

"I do believe that we have enough information to know there is a warming of the climate," Portman said. "So that’s one reason I think we need to figure out smart ways like energy efficiency to deal with it that don’t result in job loss and economic harm to working families."

Portman will be in Cleveland this week to support Trump. But he won’t be saying those things in the convention hall.