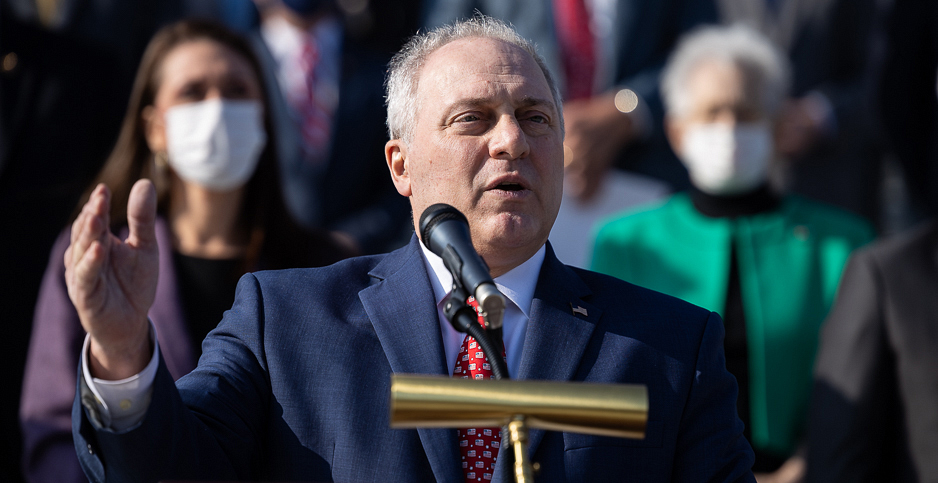 House Republicans huddling in Orlando, Fla., this week are focusing on energy as one of several issues that they believe can help them win back control of the chamber next year.

The GOP is holding its annual policy retreat in Florida this week with a goal of unifying around policy as the party begins to eye the 2022 midterm elections.

Republicans will need to flip as few as five seats to win the House majority, a goal seen as likely, especially because the president’s party almost always loses House seats in the midterms.

"There was a healthy economy that President Biden inherited, but as he starts talking about more of these radical plans and killing the Keystone pipeline, freezing leases and permits on federal lands … it’s already starting to have a chilling effect on energy jobs; gas prices are starting to go up," Scalise told reporters in Florida yesterday.

Both are frequent Republican witnesses for climate hearings on Capitol Hill. Shellenberger is a well-known nuclear energy advocate whose criticism of renewable energy and climate "alarmism" has in recent years drawn interest from Republicans and concern from environmental groups. ClearPath has emerged as a leading voice for GOP-backed energy innovation policies.

Shellenberger told E&E News that he warned at the retreat "of the threat of weather-dependent renewables causing blackouts and energy price increases, of nuclear plant closures increasing emissions, and of growing American dependence on Chinese solar genocide panels."

He’s referring to claims that China is exporting solar energy products made with forced labor, especially by members of the Uyghur ethnic minority group. Republicans in particular have expressed concern about the issue.

Powell, meanwhile, laid out a case for energy innovation, pointing to the energy bill that passed as part of the year-end omnibus in December.

"Rich spoke about why innovation for clean energy and industrial policy is the best solution for reducing global emissions," ClearPath spokesman Luke Bolar said in an email.

"He highlighted successes in the Energy Act of 2020, some new policy ideas in the industrial sector for hydrogen, steel and concrete/cement, and other policies like the Energy Sector Innovation Credit and 45Q extensions."

Scalise signaled that the GOP sees highlighting the United States’ return to the Paris Agreement and the progressive push for the Green New Deal as issues that will appeal to middle-class voters worried about jobs.

"The Green New Deal and the Paris accord targets that [Biden] just signed on to are a gift to China at the expense of American jobs. It’s primarily the working-class jobs that are going to suffer if you can’t manufacture in America because we have unrealistic emissions targets," Scalise added.

Differences between the parties over energy and climate policy are hardly new, but Scalise’s remarks show that the party intends to amplify them.

Minority Leader Kevin McCarthy (R-Calif.) also stressed the importance of energy for GOP fortunes by saying yesterday it will be the focus of one of seven new policy task forces announced at the retreat. Other task forces will coordinate on jobs and the economy, technology, and China, POLITICO first reported.

Rep. Garret Graves (R-La.) will lead the energy, climate and conservation task force that will help steer and message on those policies in coming months.

Graves, who serves as the ranking member of the Select Committee on the Climate Crisis, has deep experience in environmental issues after serving for several years on his state’s Coastal Protection and Restoration Authority.

Like McCarthy, the Louisiana lawmaker has pushed his party to acknowledge climate change and pursue clean energy technologies.

Scalise, meanwhile, also questioned whether Biden was serious about working with the GOP on infrastructure. He noted the president has not met with him or McCarthy since he was sworn in more than three months ago.

"We’re trying to figure out whether or not they are going to work with us," said Scalise, who added that he believes 75% of the proposals in Biden’s $2.2 trillion infrastructure plan have "nothing to do with traditional infrastructure."