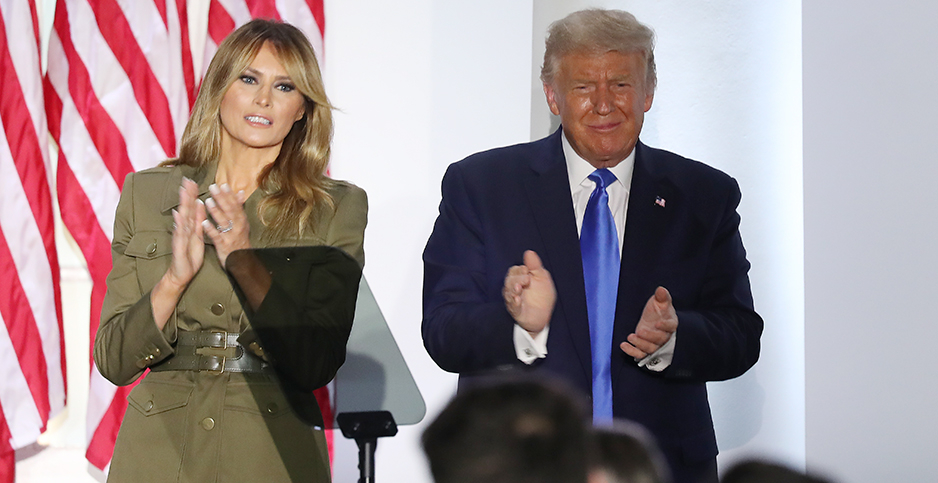 President Trump and first lady Melania Trump during the second night of the Republican National Convention. She delivered remarks from the White House Rose Garden. SplashNews/Newscom

It’s causing some consternation among the conservative activists who are concerned the party will lose out on constituencies like young voters and the suburbs if it continues on the climate path set down by President Trump.

"To see an issue that the Republican Party knows is a long-term problem for the party not get addressed in a presidential convention, which sets the agenda for the next four years, it’s really frustrating," he said.

But Trump has said climate change is a "hoax," and virtually every elected official in the party has cheered over the last few years as he’s rolled back greenhouse gas regulations across the board.

"We need to develop a 21st-century, what I call moonshot approach to help the United States be the world leader when it comes to energy resources, and to be carbon neutral by, let’s say, 2040 or 2050," Flores said.

"I regret that many of my Republican colleagues still run from this issue. And I think that’s just unfortunate," Curtis said. "I think we need to own it. We need to go on the offensive."

The fact that it’s getting no national exposure at the RNC risks undermining down-ballot candidates in purple states and districts who have tried to change their tone on climate, said Alex Flint, a former GOP Senate staffer who runs the carbon tax group Alliance for Market Solutions.

The party decided to forgo the platform process this year amid the COVID-19 pandemic. It neither clearly endorsed nor repudiated the 2016 version, saying only that if it had developed a new one, officials "would have undoubtedly unanimously agreed to reassert the Party’s strong support for President Donald Trump and his Administration."

“They don’t want their president to say ‘climate change.'”

"When you put together a platform that doesn’t include climate change, and hardly includes the environment at all, you’re delaying any real possibility for action by candidates who look towards the platform for where they stand on issues," he said.

Reams added that her organization’s polling has shown that Republicans often recoil from the words "climate change," even when they support the underlying policies to address it.

"They want to decimate the American energy renaissance that we’ve experienced these last four years. And it will crater our economy."

It doesn’t help for conservative climate groups that the convention is entirely virtual this year, meaning they’ve been unable to have a presence on the sidelines of the RNC.

Backer’s group started the #WhatAboutClimate social media hashtag "on a whim" to bring attention to the issue this week. It’s now become a full-blown social media campaign, and ACC is planning a virtual event with Curtis today on the subject.

Still, questions remain about whether Republicans will ever support an ambitious effort — whether it’s a carbon tax or regulatory policy — to reduce emissions domestically and abroad.

Many of the GOP’s carbon tax supporters have lost reelection or announced their retirement in recent years, and for now, there isn’t a single Senate Republican who publicly supports the policy.