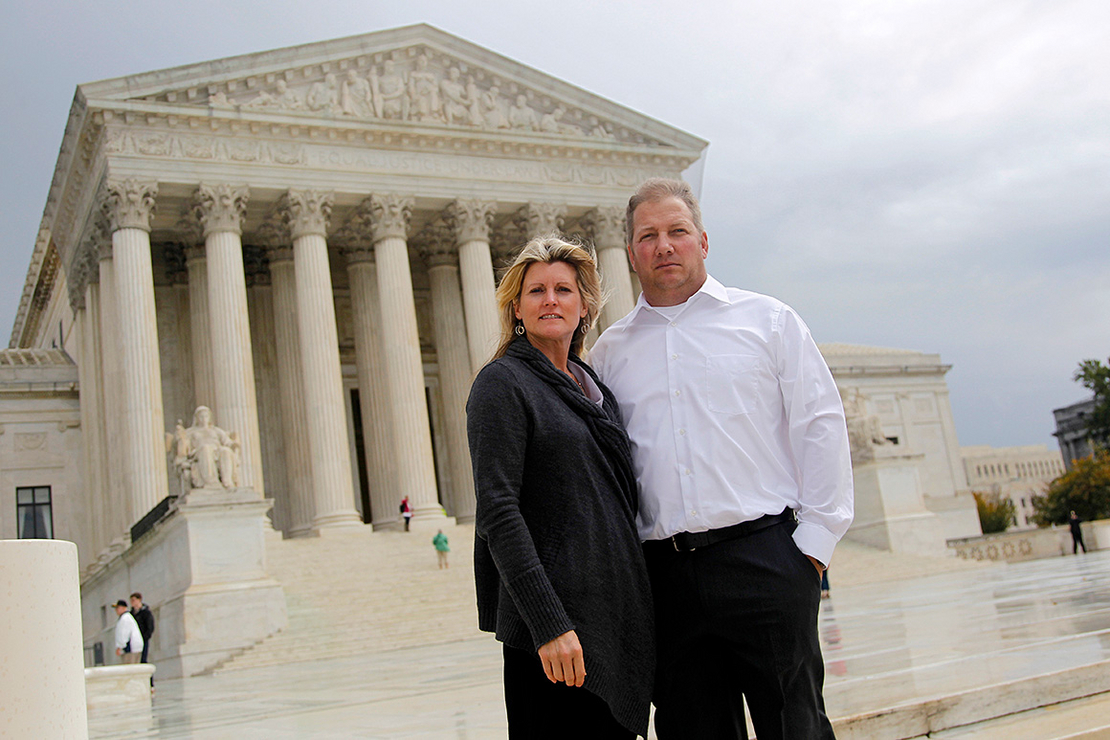 Chantell and Michael Sackett of Priest Lake, Idaho, posing for a photo in front of the Supreme Court in 2011. AP Photo/Haraz N. Ghanbari

House Republicans, conservatives and property rights advocates yesterday threw their weight behind an Idaho couple’s request for the Supreme Court to narrow the scope of the Clean Water Act.

Rep. Dan Newhouse of Washington, chair of the Congressional Western Caucus — along with Reps. Mariannette Miller-Meeks of Iowa and Rodney Davis of Illinois, who also belong to the group — filed an amicus brief yesterday in Sackett v. EPA, in which Chantell and Michael Sackett are asking the justices to reconsider a lower court’s conclusion that their property contains a “water of the United States,” or WOTUS, subject to federal permitting requirements.

The House lawmakers called on the nation’s highest bench to find that the 9th U.S. Circuit Court of Appeals got it wrong when it sided with EPA in determining that a WOTUS exists on the Sacketts’ property near Priest Lake in northern Idaho, where the couple wanted to build a home. EPA threatened fines of more than $30,000 a day if the Sacketts didn’t secure the appropriate permit.

“Confusion, unpredictability, and litigation have surrounded the scope of federal authority of our nation’s navigable waterways for decades, and as our amicus brief states, Congress never intended to give the EPA jurisdiction over every ditch, puddle, or stream,” the House Republicans said in a joint statement. Their caucus advocates for limited federal intervention in issues that affect the West, including land and resources rights.

A spokesperson for EPA said the agency does not comment on pending litigation.

The Supreme Court — which takes only about 1 percent of cases that come its way — this year agreed to consider whether the 9th Circuit erred when it affirmed that EPA has permitting authority over the Sacketts’ property. The court took the case over the objection of EPA, which said the outcome of the case could affect the Biden administration’s ongoing rulemaking to redefine what constitutes a WOTUS.

The question before the court now is whether the lower bench used the “proper test” for making that determination (Greenwire, Jan. 24).

Legal experts have said the Supreme Court’s new 6-3 conservative majority could take a more restrictive view of the Clean Water Act’s application, a move supported by House Republicans in their amicus brief.

The lawmakers argued that EPA’s “expansive” interpretation of the Clean Water Act undermines the role of states’ and localities’ conservation efforts. Their filing arrives on the heels of the Sacketts’ opening brief in the case, in which the couple urged the court to use a “two-step framework” for deciding whether their land contains federally protected waters (Greenwire, April 12).

Conservative groups and industry associations — such as the Atlantic Legal Foundation and the National Stone, Sand & Gravel Association — filed briefs backing the Sacketts this week. Amicus briefs in support of EPA’s position are expected soon.

The Supreme Court is expected to hear arguments in Sackett this fall, and it will likely be the first major environmental case for Justice Ketanji Brown Jackson, who was confirmed last week.