GOP moves to save Keystone XL, sink Democrats on energy 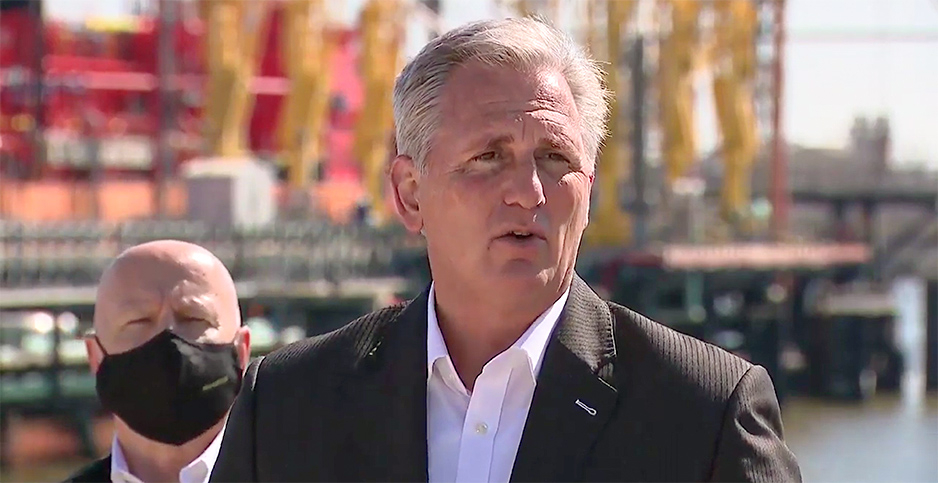 House and Senate Republicans readied legislation yesterday to resurrect the controversial Keystone XL pipeline from Canada into the United States by granting the needed approvals, which President Biden moved to scrap last month.

The legislative action came as Republican lawmakers attempt to stoke the rhetorical fires around the pipeline permit cancellation and other Biden actions, which they see as an attack on energy jobs.

The GOP legislation has no chance of becoming law this Congress, and with Democrats in control of both the House and Senate, it is highly unlikely to even see a committee hearing.

"President Biden has initiated an all-out assault on American jobs, starting with his day-one decision to cancel the Keystone Pipeline," Scalise said in a statement.

The Keystone XL pipeline has been a litmus test for lawmakers’ energy ambitions, with a roller coaster of ups and downs across the Obama, Trump and now Biden administrations.

For Democrats, the pipeline and the oil-sands crude it would move represent an affront to climate action. For Republicans, KXL stands for energy production jobs and the pursuit of energy independence.

Calgary, Alberta-based TC Energy Corp. said the project would result in some 11,000 new jobs during construction. A 2014 State Department report on the implications of the pipeline determined that most of those jobs would be temporary, with fewer than 100 becoming permanent.

Biden has vowed to unleash a wave of clean energy employment opportunities across renewable and electric vehicle technology deployment and manufacturing. He has pitched $2 trillion in federal investment to bolster that effort.

In defense of his KXL decision, Biden said the climate implications of the pipeline warranted the White House cancellation of the project’s needed permits.

"Leaving the Keystone XL pipeline permit in place would not be consistent with my Administration’s economic and climate imperatives," a Jan. 20 executive order said.

The bills surfaced yesterday against the backdrop of an escalating public relations campaign being waged by congressional Republicans against the Biden administration’s executive orders targeting pipeline construction and oil and gas exploration on federal lands.

Yesterday afternoon, as snow fell on Washington, more than half a dozen House Republicans gathered in light jackets and blazers in sunny Houston, on the shore of the Houston Ship Channel — a body of water that opens up into the Gulf of Mexico and is home to Enterprise Products Partners LP, a natural gas and crude oil pipeline company.

Each painted a dire picture of Biden’s recent actions, calling his environmental agenda variations of "divisive," a "travesty" and even a "deliberate" attack on American jobs — one that would cost the country the chance of achieving energy independence, threatening national security and elevating gas prices and electric bills nationwide.

"If the president is serious about any unity, come to Houston," McCarthy said. "Come to Middle America. Come look in the face of any of those workers who earn $80,000 a year, and tell them why you took their jobs away, without ever talking to them. Tell them why these good union workers should lose their jobs in the middle of a pandemic, and tell them your answer: ‘Just put solar panels.’"

There was also talk of the decision to halt Keystone XL’s construction, with Republicans talking up job creation benefits while undermining criticism that the project will cause mass environmental devastation.

Rep. Dan Crenshaw (R-Texas), a new member of the House Energy and Commerce Committee, accused Democrats of "lying" with the assertion that the project must be scrapped as a "sacrifice" in the pursuit of "saving the planet."

"This is not good for the environment," Crenshaw argued. "When you stop pipeline production, then you just force the transport of oil and gas on the trucks, rail, which emit more carbon. … When you destroy American energy independence, you’re ceding dominance to Russia, Venezuela and Saudi Arabia, and, as it turns out, they produce oil and gas a lot dirtier than we do in America."

At one point, Republicans gave the microphone to Dustin Mykyte, president of Pe Ben USA, a pipeline logistics company that has been working on the Keystone pipeline projects off and on for years.

"I wish I knew what we were doing wrong," he said. "We’re hiring union employees that are [a] really strong voice for the Democratic Party — they’re big voters. We pay them excellent wages, and we give them benefits, retirement accounts."