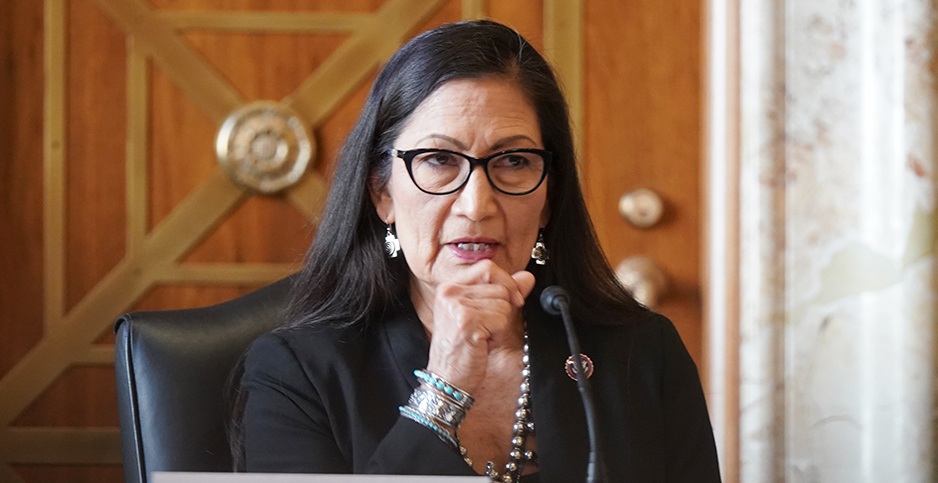 Senators concluded their questioning yesterday of Rep. Deb Haaland, President Biden’s pick to lead the Interior Department, and those already inclined to oppose her don’t appear to have been swayed by the opportunity for additional face time with the nominee.

If anything, Haaland’s opponents may be even more hardened now in their resolve to block her from being confirmed, even as a key Democrat, Senate Energy and Natural Resources Chairman Joe Manchin (D-W.Va.), handed her an important pledge of support that likely assures her confirmation at the very least along party lines (E&E Daily, Feb. 24).

Sen. Steve Daines (R-Mont.) emerged from the two-day hearing prepared to not just use the procedural tools at his own disposal to slow walk Halaand’s confirmation but to lobby fellow Republicans to follow suit.

"She’s a hard-line ideologue with radical views out of touch with Montana and the West," Daines said of Haaland, a New Mexico Democrat, in a statement. "I will oppose her nomination, work to defeat it and urge my colleagues to do the same."

Sen. John Barrasso (R-Wyo.), the ranking member on the Senate Energy and Natural Resources Committee, said Tuesday that Haaland’s answers to his questions during the first portion of her confirmation hearing were not "adequate." He was telling reporters yesterday she was "unprepared to lead the department."

And Sen. John Kennedy (R-La.), who doesn’t sit on the panel convening her confirmation hearing but represents an oil-producing state with a vested interest in Interior’s leadership, went from calling Haaland a "radical" on Tuesday to declaring yesterday she was "a neo-socialist" and "left of Lenin" who would get few, if any, Republican votes.

Haaland continued to infuriate committee Republicans by refusing to distance herself from the Biden administration, which by the end of its first day had halted construction of the Keystone XL pipeline and within its first week paused all new oil and gas leases on federal lands.

"I support President Biden’s agenda" was her frequent refrain.

Conservatives were also angry Haaland wouldn’t take ownership of statements she had made in the past in support of environmental policies that were to the left of Biden, specifically whether she would advise the president to ban fracking and make the federal leasing pause permanent — two policies she has long championed.

Despite her widely reported 2016 visit to the Standing Rock Sioux Tribe’s reservation to bring meals to protestors against the Dakota Access pipeline, it took several back-and-forths with Sen. James Risch (R-Idaho) for Haaland to finally say that she supported shutting down Keystone.

"Senator, if I say that I support President Biden’s agenda, I assume that you could take my answer as a yes," Haaland said.

Risch later tweeted, "It should not take the @Interior nominee SIX times to answer whether she supports shutting down the #KeystoneXL Pipeline."

Sen. James Lankford (R-Okla.), when asked whether he was satisfied with her responses to his follow-up questions yesterday, told E&E News that "she wasn’t sure of most of the questions, that was the challenge."

He explained, "It’s been, ‘I’ll think about that,’ or, ‘I hadn’t considered that,’ or, ‘I’ll look at the science on that’ … but not really giving an answer even on things that she stated before. She now comes out later and says, ‘That was then, this is now. I haven’t decided.’"

In reality, Haaland was unlikely to win over any of these lawmakers, as her nomination has, in the words of Sen. Maria Cantwell (D-Wash.), become "this proxy fight about the future of fossil fuels."

At one point, it looked as though Haaland might have needed one or two Republican votes to make up for Manchin, who for weeks insisted he was not yet settled on Haaland and had Democrats nervous after all but sinking Office of Management and Budget director nominee Neera Tanden (Greenwire, Feb. 24).

But Manchin announced yesterday he would support Haaland, meaning that even if she loses all 50 Senate Republicans, she can be confirmed as long as all 50 Senate Democrats hold firm (E&E News PM, Feb. 24).

There are still Republican undecideds, though, who could make Halaand’s nomination at least somewhat bipartisan — a feat that would be a feather in her cap and in general a good thing for a Cabinet secretary about to embark on executing environmental policies at a politically polarized moment.

Sen. Lisa Murkowski (R-Alaska) had sharp questions for Haaland on Tuesday and yesterday — she took a third round to press the nominee on her commitment to respecting Alaska land and water rights and the state’s oil- and gas-dependent economy — but insists she is still "working through" the nomination.

"There were a lot of representations from the nominee that she … appreciated our concerns and she wants to work with us," Murkowski told reporters. "I didn’t hear a lot of real knowledge and understanding as to the role that the secretary has over managing our public land."

Murkowski said she planned to meet with Haaland again in the coming days.

Manchin suggested in his statement of support for Haaland that the contender did herself a huge favor with skeptics — perhaps even with Murkowski — by asserting that she and Biden didn’t believe fossil fuels were going away "overnight," despite Democrats’ desire to facilitate a transition away from traditional energy sources.

"I want to make sure that if I’m confirmed that we are looking at things and working to strike the right balance," Haaland at one point yesterday explained to Barrasso. "We need to care as much about the environment as we do about the fossil fuel infrastructure in your state and other states."

The Western Energy Alliance, which actually filed a lawsuit challenging Biden’s decision to freeze the federal oil and gas leasing program and launched an ad campaign "to educate westerners on the economic costs of President Biden’s ban," was striking a softer tone on Haaland by the conclusion of the two-day confirmation hearing.

"I’m encouraged that Rep. Haaland is rising to the occasion," Western Energy Alliance President Kathleen Sgamma said. "She recognized the importance of oil and natural gas to the Interior Department and country throughout her confirmation hearing. The fact she acknowledged that there has to be some moderation to her personal opinions and that radical environmentalism doesn’t translate well into governance is a good first step."

Sgamma added, however, that Haaland was being disingenuous in calling the leasing freeze an "insignificant ‘pause’" instead of "a multiyear ban through paralysis by analysis."

This will continue to be a sticking point for Republican critics. But Sen. Martin Heinrich (D-N.M.), who voted for President Trump’s Interior secretaries despite fundamental disagreements in order to preserve a working partnership, said he hoped GOP colleagues would follow that example.

"I would hope some of the more reasonable Republicans will support her nomination and work with her to make sure that her tenure at Interior is a success and that the things they want to see Interior accomplish are successful," he said last night. "If not, I think that’s a really sad commentary on where we are."