GOP presses on with Barrett nom as COVID-19 spreads 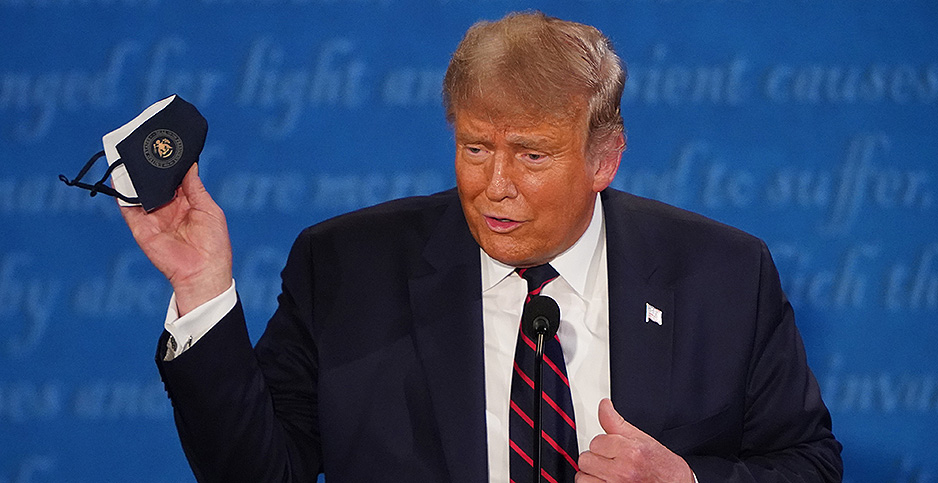 Overnight news that President Trump and the first lady had tested positive for the novel coronavirus shook members of Congress this morning, setting off a scramble over how to best respond to the stunning development.

Lawmakers were also rushing to account for who might have been directly exposed. Three Minnesota Republican lawmakers flew on Air Force One with Trump on Wednesday, while senators have spent the past week meeting with Supreme Court nominee Amy Coney Barrett in close quarters on Capitol Hill.

In another jolt, Sen. Mike Lee (R-Utah), who met with Barrett on Tuesday, announced this morning that he, too, had received a positive COVID-19 test result.

Republicans, many of whom have been slow to wear masks regularly on the Hill, offered variations of thoughts and prayers.

"I think this moment in time is a time the nation should come together and pray for the president," House Minority Leader Kevin McCarthy (R-Calif.) told reporters.

Democrats offered the same, alongside varying degrees of jabs at an administration that has by and large eschewed mask-wearing and social distancing protocols, holding large campaign rallies and seating chairs close together at official gatherings.

"Maybe now that people see the president of the United States, with all the protection that he has, and the first lady, still having this exposure, it may be … a learning experience, but more than learning, it has to be something that is acted upon," said House Speaker Nancy Pelosi (D-Calif.) on MSNBC early today.

"It is tragic," said Pelosi. "It is also very sad, but it also, again, someone going into crowds unmasked, and all the rest, is sort of a brazen invitation for something like this to happen."

Pelosi, who has been meeting in person with Treasury Secretary Steven Mnuchin this week to negotiate another round of coronavirus relief legislation, also told MSNBC she was awaiting the results of a COVID-19 test, though she noted that Mnuchin had personally informed her that he had tested negative hours earlier.

The House Democratic Caucus’ vice chair, Massachusetts Rep. Katherine Clark, said she wondered whether the Trumps’ diagnoses, which have both the president and first lady currently experiencing "mild symptoms," could affect the stimulus negotiations.

"I hope it will highlight how very real this pandemic is, the loss of life and livelihoods, and will pry open the negotiations with the administration and the Senate," Clark said in a brief interview.

Across the Capitol, Senate Majority Leader Mitch McConnell (R-Ky.) made it clear he had no plans to slow down the Senate’s confirmation of Barrett to the Supreme Court in time for the presidential election on Nov. 3.

"Just finished a great phone call with @POTUS," McConnell tweeted Friday morning. "He’s in good spirits and we talked business — especially how impressed Senators are with the qualifications of Judge Barrett. Full steam ahead with the fair, thorough, timely process that the nominee, the Court, & the country deserve."

Senate Judiciary Chairman Lindsey Graham (R-S.C.) also tweeted today that there would be no postponement of the four days of confirmation hearings set to begin on Monday, Oct. 12.

Senate Minority Leader Steve Scalise (R-La.) underscored that Trump’s diagnosis should not undermine confidence in the country’s ability to govern, lead and function in the public and private sectors.

"We’re on the brink of a vaccine," he said. "We need to keep battling COVID-19, but we also need to get our economy back open."

‘No business should proceed’

Lawmakers this morning were both absorbing the news and assessing what it could mean for the daily operations on Capitol Hill.

On the Senate side, many Democrats were calling for the chamber to be effectively shut down while lawmakers who had met with Barrett get tested and self-isolate — even though Barrett and her escort to many Hill meetings, Vice President Mike Pence, have tested negative within the last 24 hours.

"The infection of the President, First Lady and a close aide require that the White House immediately conduct a contact tracing regime that follows CDC guidelines, as well as thorough testing and isolation for those who were exposed to infection risk. That includes Judge Amy Coney Barrett and anyone she was in contact with," Senate Minority Leader Chuck Schumer (D-N.Y.) said in a statement.

"It must also include people in the Senate with whom those individuals came into contact with, and their contacts," said Schumer.

Sen. Chris Murphy (D-Conn.) agreed. "Everyone in the Capitol complex needs to be tested," he tweeted. "Every Republican Senator or staff member who was in close contact with Trump needs to quarantine. No business should proceed in the Senate until we understand the scope of this crisis."

Their calls came even before Lee, a member of the Judiciary Committee, announced today that he had tested positive for the virus yesterday, after experiencing symptoms he said he initially thought were "consistent with longtime seasonal allergies."

"I have spoken with Leader McConnell and Chairman Graham, and assured them I will be back to work in time to join my Judiciary Committee colleagues in advancing the Supreme Court nomination of Judge Amy Coney Barrett," Lee said in a statement.

Lawmakers on both sides of the aisle, and in both chambers, were today also calling for bicameral leadership to finally institute comprehensive testing and contact tracing on Capitol Hill for members of Congress, support staff and employees throughout the complex.

Though McConnell and Pelosi have so far been resistant to enjoying safeguards not easily available to many Americans, that reluctance could now be beginning to thaw.

House Majority Leader Steny Hoyer (D-Md.) told reporters he had spoken with Pelosi about the need for widespread, reliable testing on Capitol Hill and said the chamber’s leadership would make a decision when the House returns to session, which is currently at a date to be determined.

Making testing available on the Hill would accompany recently established protocol on the House side of the Capitol mandating face coverings, which followed the coronavirus diagnosis of Rep. Louie Gohmert (R-Texas), who had been notorious for flouting mask guidance.

But there is not much leaders can do to enforce good behavior and adherence to public health recommendations.

For instance, while the three Minnesota Republicans who flew with Trump on Air Force One earlier this week — Reps. Pete Stauber, Jim Hagedorn and Tom Emmer, the National Republican Congressional Committee chairman — are all getting tested, each voted on the House floor Friday, despite pleas from colleagues that they stay away until their results return.

"To any members of Congress who were in close quarters with the President recently — please don’t come to work today," Rep. Joaquin Castro (D-Texas) tweeted hours before the House was scheduled to take the last floor votes of the week. "That’s why we put in place proxy voting during this pandemic."