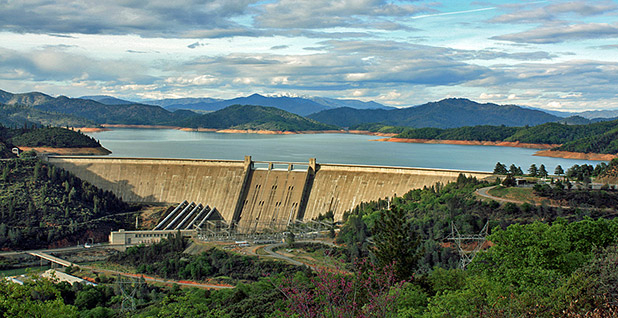 House Republicans are seeking to add a provision to must-pass spending legislation that would facilitate a massive water infrastructure project in California, even though the state has said it doesn’t want it.

Congress is rushing to pass a funding measure to keep the government open by next Friday. A rider backed by House Majority Leader Kevin McCarthy (R-Calif.) would allow the federal government to pay for the early phases of raising Shasta Dam in Northern California.

"If we’ve learned nothing else from the past years of catastrophic drought in our state," McCarthy said in a statement, "perhaps we now all agree that increasing storage capacity to capture water during wet years for use in dry years is absolutely critical. That is why I strongly support expanding the Shasta Reservoir."

President Trump’s budget proposal called for $20 million for the design and pre-construction costs to raise the more than 600-foot Bureau of Reclamation dam 18.5 feet, adding to its storage capacity. In total, the project would cost more than $1.3 billion.

"This administration is in support of more storage," Interior Secretary Ryan Zinke said at a House Natural Resources Committee hearing yesterday. "Shasta is an example of that."

McCarthy’s office wouldn’t comment on the rider’s specifics. According to sources who have seen draft language, it would exempt the project from a requirement that the federal government not pay more than half the cost of new water storage facilities.

If the rider is successful, the federal government could shoulder all the cost of the early phases of the project, which would be one of the largest water infrastructure endeavors in decades.

Erin Curtis, a spokeswoman for the Bureau of Reclamation, said the president’s budget request is consistent with provisions in the Water Infrastructure Improvements for the Nation (WIIN) Act.

Curtis said $67 million of those funds was appropriated to California, and the $20 million for Shasta would come from that.

"Investing in new infrastructure at Shasta will create a needed and significant new water supply for California’s families, farmers, cities and environmental resources," Curtis said in an email.

Shasta is one of the largest dams in the country and impounds California’s largest reservoir. Water from Shasta Lake is shuttled south to agricultural and urban areas.

Raising the dam has been debated for two decades as a way to boost the state’s water supply. But it has run into significant opposition.

If the Trump administration moves forward with the project, it is sure to inflame its already tense relationship with California, which told congressional leaders this week that it opposes the project and considers it illegal under state law.

"The letter is to express opposition to the Department of the Interior’s proposal to fund design and pre-construction activities associated with the proposed Shasta Dam and Reservoir Enlargement Project," California Secretary for Natural Resources John Laird wrote.

If the dam is raised, it would inundate the McCloud River, a tributary of the Sacramento River. The McCloud is protected under the California Wild and Scenic Rivers Act.

"Are you aware that enlarging Shasta Dam violates state law?" Huffman asked. "Do you want to be throwing $20 million into studying a project that’s illegal?"

Zinke responded that California needs more water supply and that Shasta was originally built so the water level could be "much higher."

"We are looking at it," he said. "We haven’t made a determination."

If the dam is raised, a key beneficiary would be the politically powerful Westlands Water District, a major agricultural producer in the San Joaquin Valley that gets most of its water from the federal Central Valley Project.

Westlands’ former lawyer, David Bernhardt, is now deputy Interior secretary. Bernhardt has said he will comply with conflict-of-interest rules, but critics of the administration have not been satisfied.

"Can you assure us that this has nothing to do with that?" Huffman asked Zinke yesterday.

Westlands has already purchased about 3,000 acres of land related to the potential raising of the dam and larger reservoir.

Rep. Raúl Grijalva of Arizona, the ranking Democrat on the Natural Resources Committee, said there is opposition to the rider on his panel.

"They’re trying to force something that’s been tried before and didn’t get anywhere," Grijalva said in an interview. "We’re monitoring what everybody else is trying to put into this rider bill."

Grijalva suggested "cronyism" might have something to do with the effort on Westlands’ behalf.

"This project has been dead as a doornail for quite sometime because it’s illegal under California law," said Ron Stork, senior policy advocate for the group Friends of the River. "It’s outrageous."

The nonprofit California Trout Inc. urged its members this week to contact Congress about the issue.

If the rider passed the House, either of California’s Democratic senators, Dianne Feinstein or Kamala Harris, could work to strip it from the measure. Spokesmen for both senators did not respond to a request for comment.