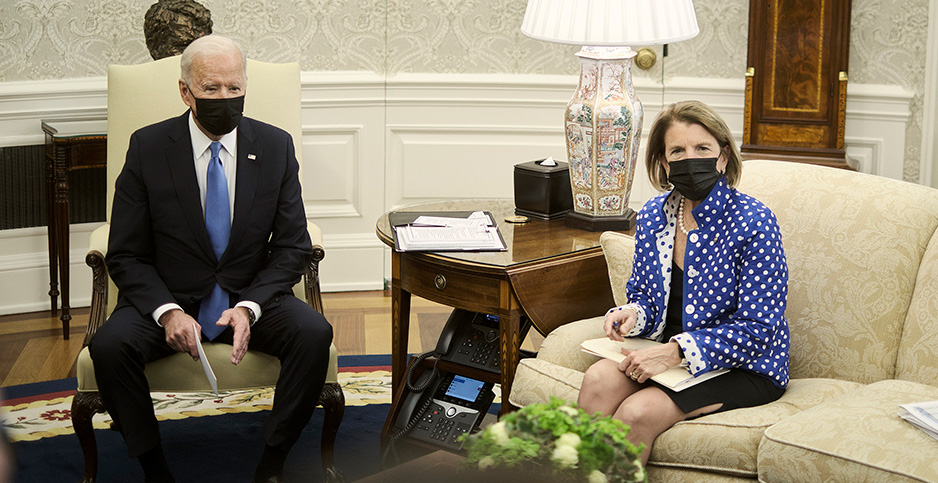 The White House and Senate Republicans are set to begin trading offers on infrastructure in earnest, following an Oval Office meeting yesterday that both sides described as positive.

At President Biden’s request, Senate Republicans said they will prepare a new infrastructure offer they hope to send to the White House by early next week.

"We had a very productive, more than courteous, give and take," Capito told reporters at the White House afterward. "We did talk specifics, and the president has asked us to come back and rework an offer so that he could then react to that and then reoffer to us. So we’re very encouraged."

Sen. Roy Blunt (R-Mo.), who also attended the meeting, told reporters at the Capitol later that the discussion focused on defining the scope of infrastructure "and our ideas as to how we pay for what we want to do without getting into the tax bill."

Republicans last month offered $568 billion for roads, bridges, broadband and water projects but have so far resisted Biden’s $2.2 trillion infrastructure proposal as too broad. The president is also seeking an additional $1.8 trillion for child care and other "social infrastructure."

In addition, Republicans remain steadfastly against Biden’s proposal to hike the corporate tax rate to 28% over 15 years, which would undo the lower rate the GOP enacted without Democratic support in 2017.

With the White House looking to Memorial Day as a benchmark for progress on bipartisan negotiations, Blunt acknowledged that time is a factor.

"I think we’ll be able to go back by the first of the week with another offer," Blunt said. "And I believe he might very well make a counteroffer to that. And we all know, we need to move pretty quickly here."

Also present were Sens. John Barrasso (R-Wyo.), the ranking member on the Energy and Natural Resources Committee; Mike Crapo of Idaho, the top Republican on the Finance panel; Pat Toomey (R-Pa.), the ranking member on the Banking, Housing and Urban Affairs panel; and Roger Wicker of Mississippi, the top Republican on the Commerce, Science and Transportation Committee.

In remarks after the huddle, Biden said it was a "very, very good meeting." "I am very optimistic that we can reach a reasonable agreement," he said. "But even if we don’t, there’s a good-faith effort that’s been started."

Biden added that both sides presented their cases and agreed to keep talking. "We didn’t compromise on anything," he told reporters at the White House.

"What we did was I laid out what I thought we should be doing, how it should be paid for, and my colleagues in the Senate came back and said they’ll come back to me with a counteroffer of what they are prepared to do and fund and how to fund it. And then we’ll talk again next week."

While Senate Minority Leader Mitch McConnell (R-Ky.) said this week that he told Biden that Republicans would not support the president’s proposed corporate tax hikes to pay for infrastructure, White House press secretary Jen Psaki signaled yesterday that the administration isn’t giving up on his preferred pay-for.

"We have not seen proposals that wouldn’t raise taxes on people making less than $400,000 a year," Psaki told reporters yesterday. "So if they feel that changing the 2017 tax laws, bringing it back to the rates that were the rates when George W. Bush was president, raising taxes on just 1% of Americans is not the way to do it, then we welcome what their alternatives are."

Psaki also appeared yesterday to retreat from her remarks last month in which she indicated that user fees — the GOP’s preferred pay-for — were a "line in the sand" for Biden.

"His only line in the sand is inaction," Psaki told reporters.

Meanwhile, liberal Democrats, environmentalists and labor interests continued to push back against the outreach to Republicans.

Citing new EPA data on the effects of climate change in the United States, Sen. Sheldon Whitehouse (D-R.I.) said yesterday that congressional action isn’t matching the urgency of the moment.

"The data doesn’t lie: the EPA’s new report shows society pushing nature to its limit," Whitehouse said in a statement. "Either we act now, or we risk failing the critical test of 1.5 degrees Celsius of warming and lock in ever-worsening threats."

Ongoing efforts to develop an infrastructure package "ought to include substantial climate components," he added.

"Nature’s not waiting, why are we?" Whitehouse asked.

Adding to progressives’ skepticism over bipartisan negotiations was a letter sent yesterday to Biden and top Democrats by environmentalists and labor groups expressing concern over "proposals being made in Congress that could delay or weaken the economic recovery investments that are necessary to truly build back better."

"Now is the time to realize a bold agenda for the American people without delay or dilution," wrote Center for American Progress founder John Podesta, as well as the heads of the Sunrise Movement, National Wildlife Federation, Sierra Club, United Steelworkers and others.

"Facing deep economic insecurity, systemic oppression, polluted air and water, and climate disasters, millions of people across the country urgently need solutions as big as the crises we face," the letter said. "Those who argue for small-minded measures are on the wrong side of history."

The centerpiece of that markup will be Wyden’s proposal to overhaul the energy tax code by consolidating dozens of existing incentives into three technology-neutral categories: clean electricity, transportation and efficiency.

Wyden said this week the approach should hold appeal to Republicans, who last month expressed concerns about the bill’s repeal of a host of fossil fuel incentives (E&E Daily, April 28).

"My Republican colleagues have criticized energy incentives for years on that basis, and an emissions-based approach takes care of that concern," Wyden said. "It’s a market-based approach that will help foster innovation."

Members on both sides of the Capitol continue to press their own energy tax plans as the infrastructure debate unfolds.

Renewable advocates spent yesterday promoting a pair of bills that they say would help deploy more renewable energy onto the grid through the build-out of more transmission infrastructure and a tax credit tweak that would allow companies to claim direct payments for the credit.

The American Council on Renewable Energy released a report that found an investment tax credit for transmission projects could yield as many as 650,000 jobs, add 30,000 megawatts of renewable energy capacity and spur more than $15 billion in private capital investment in the near term.

The report came in defense of a proposal from Sen. Martin Heinrich (D-N.M.) to provide a 30% investment tax credit for so-called regionally significant transmission projects.

"Only once we site and build new transmission lines can we truly rewrite the map of our energy landscape to move clean electrons to market and bring many, many more utility-scale clean energy projects onto the grid," Heinrich said about the report.

Such a tinker could enable renewable developers to quickly access more financing for their projects.

Direct payments have become an industry priority in the face of uncertain financing caused by the pandemic.

"This small but impactful change in renewable energy tax incentives will support wind, solar and other energy projects at a critical moment for the industry and our country as we work to build our economy back better in a way that supports decarbonization," Blumenauer said.