GOP sees an opening in attacking Dems on critical minerals 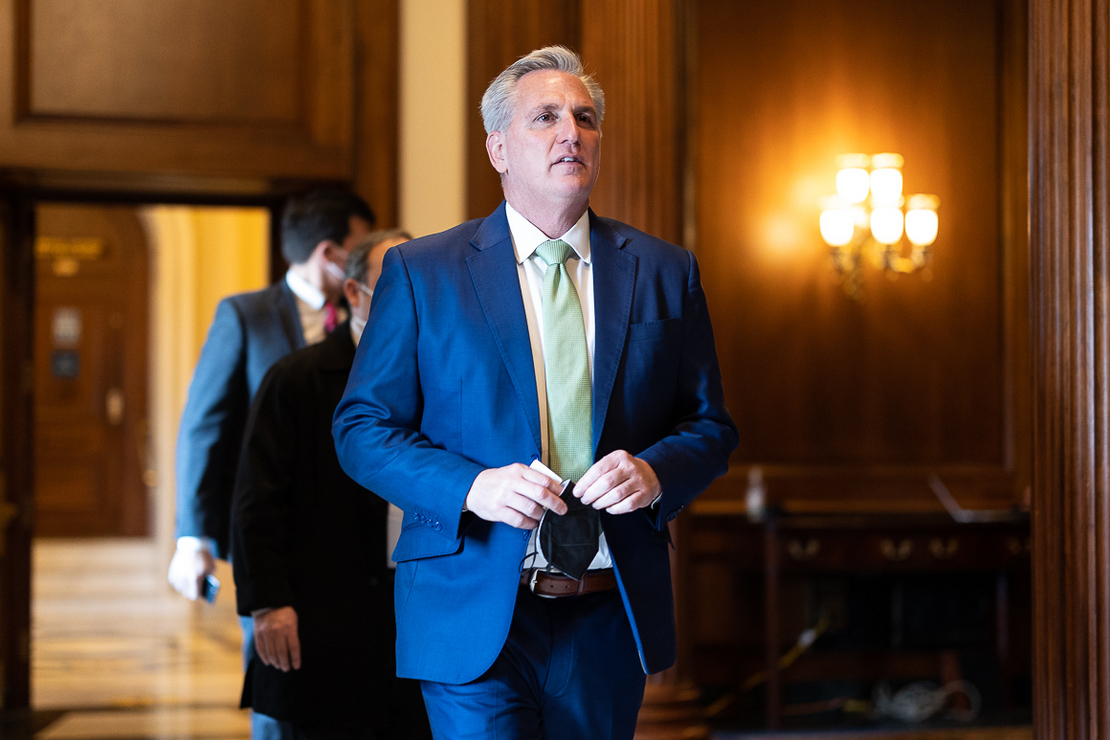 Republican lawmakers are increasingly focusing on mineral security, confident the issue will become a winning political issue for them.

While President Biden has prioritized rebuilding the U.S. mineral supply chain as a way to tackle climate change and curb the country’s reliance on foreign sources for materials essential to the economy, he hasn’t greenlighted any large new mines.

Moreover, the administration has put the brakes on major projects opposed by environmentalists and Indigenous groups, including the Twin Metals copper mine in Minnesota and the Rhyolite Ridge lithium mine in Nevada.

Watching this schism between rhetoric and reality, Republicans see an opening.

“If we want to go carbon-free, we’re going to have to embrace some of these rare earth minerals,” Rep. Dan Newhouse (R-Wash.), chair of the Congressional Western Caucus, recently told reporters.

He said of Democratic efforts to restrict mining activities on public lands: “I think a lot of my colleagues are finding themselves, maybe, between a rock and a hard place on this issue.”

Republicans have long warned that mineral demand could drastically increase as climate action causes nations to rebuild their entire electric grids and transportation fleets. Now, world events like the pandemic and Russia’s war on Ukraine are stressing already-strained mineral markets.

In response, Republicans have called for faster permitting to get shovels in the ground at critical mining projects at home. They have also begun calling for a greater U.S. role in foreign mine acquisitions, as China continues to grow as a dominant player in the global mining industry. They’ve also begun invoking national security when it comes to minerals, arguing for the continued use of oil and gas.

Democrats, however, say Republicans are drawing from an old playbook.

“It’s not a new argument,” said Rep. Jared Huffman (D-Calif.). “Ever since I came to Congress, [Republicans have] been trying to designate every mineral on Earth, including sand and gravel, as strategically critical minerals that require complete waivers of all environmental laws. I mean, this is tired, old stuff.”

But Quill Robinson, government affairs director with the American Conservation Coalition, a nonprofit pushing conservative congressional candidates to embrace the politics of climate change to win over young voters, believes the environmental argument is where Republicans can absolutely make gains in this debate.

“I think it’s a winning policy that could be a winning message,” Robinson said. “A lot of people don’t know what goes into a battery, so there’s some explaining that maybe [Republicans] should do. … If we can land on an effective way to communicate that message, people will get it.”

Biden rarely discussed mining on the campaign trail. But early in his administration he said he would focus on creating American jobs by bringing to the U.S. the mineral supply chains that feed battery and EV manufacturing.

Last week, Biden debuted a strategy addressing the critical minerals equation that he said would balance the need for new minerals with environmental and social considerations. The strategy included the formation of a mining policy reform working group and plans to push for changes to federal mining law (E&E News PM, Feb. 22).

But mineral security has not been “at the top-tier level” in the Biden administration “and I don’t think it will be,” said Morgan Bazilian, director of the Payne Institute for Public Policy at the Colorado School of Mines. The announcement last week actually “did little to give a mining company any certainty” because it lacked details.

“They’re giving it some political attention,” Bazilian said, “and the real impacts for mining are fairly limited because the focus is more on studies.”

All the hullabaloo in D.C. over critical minerals is because of China, Bazilian said.

China obtained enormous control over the global battery supply chain over the last decade by fostering the growth of its chemical processing and battery manufacturing industries. Chinese companies have also scooped up many mining properties across Africa and Latin America that produce the minerals crucial for making clean energy products.

Under Trump, the U.S. tried to launch an all-of-government effort to stymie China’s foothold in mineral markets.

Since entering office, Biden has kept those policy decisions in place. But it’s not clear if any of those actions have made a dent in Chinese control of these important minerals. In Biden’s first year, the U.S. import reliance on foreign sources of minerals did not improve — a trend line with a long history that persisted through the Trump years too (E&E News PM, Feb 1).

Experts have warned this deepening reliance on foreign mineral sources could be a serious problem for addressing climate change.

That’s because when countries count on others for metals, it can become a problem in a crisis. When conflicts arise with a country like Russia — which also controls vast amounts of minerals needed for clean energy — it can leave other economies vulnerable to metals price spikes (Greenwire, Feb. 24).

There’s also concern of “greenflation” — that failing to have ample and secure supply of minerals could lead to price increases for U.S. consumers in the event of a sudden green energy demand spike or climate-related supply shock (Greenwire, Nov. 17, 2021).

GOP lawmakers, with increasing frequency, are pointing out it will be impossible for the United States to drive down emissions without the minerals needed to produce batteries for electric vehicles. They are also pointing out the abhorrent human rights conditions at mining sites in the regions the U.S. currently relies on for critical minerals, like the Democratic Republic of Congo.

When Rep. Pete Stauber (R-Minn.) talks about critical minerals, he frequently draws a contrast between how the materials are extracted at home versus abroad.

“When we mine our minerals here in the United States, we do it cleaner than anybody and safer than anybody — best labor standards of anybody,” he said in an interview with E&E News. “There is a sentiment among my Democratic colleagues that don’t believe the American blue-collar worker can do it right, and that’s unacceptable. We can do it right.”

At the same time, the memo continues, “rather than look for ways to increase domestic production of these minerals, Democrats have pushed measures to increase costs for domestic mining operations and to stifle production.”

Stauber said he hopes the topic will become a key platform plank on the House GOP’s Task Force on Energy, Climate and Conservation.

The task force, led by Select Committee on the Climate Crisis ranking member Garret Graves (R-La.), was one of several established last year by House Minority Leader Kevin McCarthy (R-Calif.) to provide voters with clear understandings of how the party would legislate in the event it can win back power in the House in November.

“I can tell you we are pushing very, very hard” to include critical minerals in the task force platform, Stauber said, adding he was “continuously working with Rep. Graves on bringing some final wording and comments from the Republican Conference to the American people” on the subject.

McCarthy told Fox News earlier this month that if Republicans take the House majority, there will be a “committee on China” examining supply chain issues with a focus on “how we can compete when China comes in and captures the critical minerals.”

Aside from the usual GOP talk about streamlined permitting, conservatives have begun rallying around a more aggressive tack: leveraging U.S. power on the world stage to stop mining industry transactions that benefit Chinese companies.

Republicans first hinted at the idea in January when House Oversight and Reform Committee ranking member James Comer (R-Ky.) opened a probe into a 2016 deal in which a U.S. company sold a Congolese mine to a Chinese firm. The deal involved a firm connected to the president’s son Hunter Biden. There was no evidence he profited from the sale (E&E Daily, Jan. 21).

“The American people deserve answers regarding why the Obama administration … watched in silence as an American company transferred control of this precious asset to a Chinese conglomerate,” stated a letter Comer sent to the National Archives last month.

Signed by Reps. Michael Waltz (R-Fla.), Elise Stefanik (R-N.Y.), and Lance Gooden (R-Texas), the letter “raises questions regarding whether the United States was notified … of the pending acquisition by the Chinese state-owned firm,” according to a press release announcing the inquiry.

“The Chinese Communist Party’s influence and control over U.S. supply chains is reason for concern for every American,” Stefanik said.

Robinson, the conservative advocate, said there is a strong national security component to the critical minerals debate. However, he said, it will take savvy messaging to make voters connect faulty mining policies with faltering on climate action.

He pointed to a recent ACC poll showing that voters aged 18-30 ranked “national security” as one of the least compelling arguments for combating climate change out of a list of options, including “air pollution” and “wildlife extinction” (E&E News PM, Feb. 25)

Rep. Huffman is incredulous about whether attacks on mining will resonate with climate-conscious voters.

“It’s disingenuous,” Huffman said, calling the GOP messaging move “a phoned-in repackaging of a really tired, old agenda for the mining and fossil fuel industries, basically a way to clear a way of environmental reviews.”

He said, however, there could be a benefit for environmentalists as Republicans prioritize mining: It could set the table for more serious conversations about changing mining laws.

“If that is Mr. McCarthy’s concern, then perhaps he’ll join me in reforming the General Mining Law of 1872,” Mintzes said. “There actually is some confluence here between security hawks and conservationists and those who want to protect natural resources and community rights.”