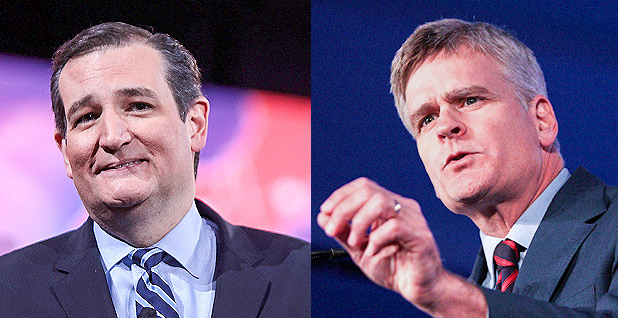 Senate Republicans have lost no time in embracing the Trump administration’s message of "energy dominance" and this week floated legislation to fast-track exports of domestic U.S. gas.

The bill, dubbed the "License Natural Gas (LNG) Now Act," would remove provisions from the Natural Gas Act of 1938 that require federal approval to export natural gas abroad. Under the law, the Energy Department currently assesses whether such exports meet a "public interest" test, although nations that have free-trade agreements with the United States automatically qualify for exports.

In a statement, Cassidy’s office said the bill "guarantees acceptance of export volume applications to the Department of Energy for export and import of natural gas without delay," criticizing reforms the Obama administration employed in response to criticism from industry that the application process was overly cumbersome.

"The previous administration created hurdles that stalled LNG projects that benefit the economy, environment and Louisiana workers." said Cassidy in a statement. "This legislation adds certainty to the approval process and brings investment, and better-paying jobs, to Louisiana."

His legislation would also require DOE to submit a report to Congress on actions that could be taken to boost exports of natural gas, as well as a list of regulations that are hampering the growth of the U.S. natural gas market. It would keep intact the separate liquefied natural gas export facility licensing process at the Federal Energy Regulatory Commission.

The bill, which is supported by the American Petroleum Institute, the Center for Liquefied Natural Gas and LNG Allies, highlights the changed political environment that has unfolded since the election of Donald Trump as president.

In the last Congress, both the House- and Senate-passed bills would have imposed a "shot clock" on DOE for making final decisions on export applications after receiving the final environmental reviews from FERC.

Those bills died after months of formal conference talks ended in the closing weeks of the session.

Senate Energy and Natural Resources Chairwoman Lisa Murkowski (R-Alaska) said this week that the shot clock would be included in a revised version of the bipartisan energy package that she and ranking member Maria Cantwell (D-Wash.) are hoping to reintroduce in the coming weeks.

Key House advocates of LNG exports said earlier this month they were holding off on reintroducing bills to speed exports until DOE completes a review of the process (E&E Daily, June 8).

Cruz’s bill would amend the Natural Gas Act to create a process for expediting LNG exports. Cruz claimed that expanding such overseas sales "will lead to increased investment and development of domestic supplies of natural gas that will contribute to job growth and economic development."

Any nation subject to sanctions or trade restrictions would be exempt from the expedited process, according to the bill.

Republican Sen. Steve Daines said he aligned with the administration’s thinking and touted his home state of Montana’s massive coal, oil and gas reserves that are balanced with hydropower and wind, adding he’d like to bring his state’s energy approach to a "national scale."

Energy Secretary Rick Perry blamed federal regulations for stalling fossil fuels in states like Montana and said the president has given clear instructions to pull back such restrictions.

Perry added that countries like Ukraine attempting to buffer Russia’s influence or India with booming, electricity-hungry populations could be critical consumers of the United States’ oil, gas and coal.

"America, I don’t think, has had a greater opportunity in our history to be able to play a powerful role in securing our national defense, making sure economically we are a massive player in the global marketplace and having an impact on the environment," Perry said.

But Senate Democrats pushed back, with Cantwell saying the White House should be more focused on technologies like efficiency and clean energy than coal.

"We’ve heard a lot about the so-called energy dominance from this administration," Cantwell said. "I’d like to hear a lot less about exporting commodities that even nations like China are starting to have major blowback on."