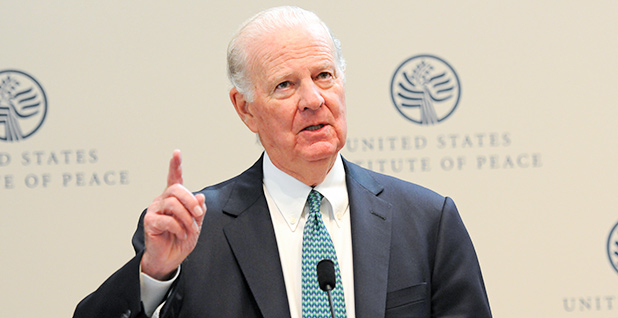 James Baker is among the prominent Republicans meeting at the White House this morning to discuss a carbon tax. Source: US Institute of peace Photo courtesy of United States Institute of Peace.

Eight party statesmen, economists and past Cabinet secretaries will pitch the proposal to the Trump administration in two separate meetings at the White House. It’s unclear if President Trump will attend.

The plan calls for a $40 tax on each ton of carbon dioxide. It would rise steadily over time to drive down emissions and to spur technological advances in areas like electricity generation and transportation. The revenue would be given back to Americans, amounting to about $2,000 annually to a family of four.

"Mounting evidence of climate change is growing too strong to ignore," the plan says. "While the extent to which climate change is due to man-made causes can be questioned, the risks associated with future warming are too big and should be hedged. At least we need an insurance policy."

Trump rejected carbon taxes on the campaign trail, and the Republican Party used its platform to explicitly rule them out. Trump also named officials to his transition team who vehemently oppose carbon taxes, including Myron Ebell of the Competitive Enterprise Institute and Thomas Pyle, president of the American Energy Alliance.

Yet one of Trump’s closest counselors supports the idea. Secretary of State Rex Tillerson promoted carbon taxes as CEO of Exxon Mobil Corp.

Today’s plan, called "The Conservative Case for Carbon Dividends," argues that taxing emissions at the source, like coal mines, will help the economy and financially distressed families. It seeks to connect with the populism that Trump exploited to win the election, by saying the dividends could soothe American anger by putting cash in people’s pockets.

But there’s also a political calculus.

The plan suggests that Republicans are losing to Democrats on the politics of climate change. In a section titled "Consolidating Conservative Leadership," the plan argues that broad resistance to climate action within the GOP reflects "poor science and poor economics."

That opposition to environmentalism is at odds with the party’s "noble tradition of stewardship," it says.

"Now that the Republican Party controls the White House and Congress, it has the opportunity and responsibility to promote a climate plan that showcases the full power of enduring conservative convictions," the plan says. "Any climate solution should be based on sound economic analysis and embody the principles of free markets and limited government."

The plan stands to cause controversy among environmentalists by calling for a widespread repeal of U.S. EPA’s authority to regulate greenhouse gases.

"Much of the EPA’s regulatory authority over carbon dioxide emissions would be phased out, including an outright repeal of the Clean Power Plan," the plan says.