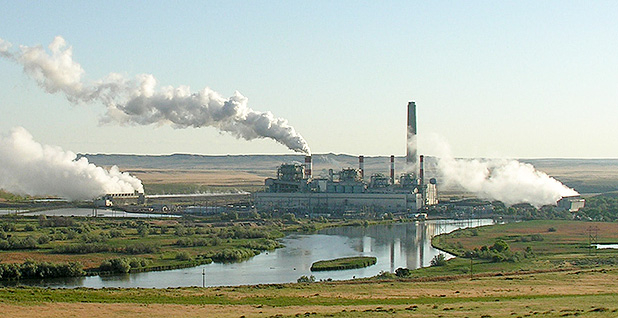 A coal-fired power plant in Wyoming. Supporters of the energy source are watching for Trump administration steps against the Clean Power Plan. Photo by Greg Goebel, courtesy of Flickr.

Senators who like President Trump campaigned on promises to eliminate the Clean Power Plan are fine with the White House slow-walking efforts to tackle the rule.

Hopes are high that Oklahoma Attorney General Scott Pruitt (R) will be confirmed as U.S. EPA administrator next week, and they say filling top posts within the agency before detailing plans to ax the Obama-era rule to slash greenhouse gas emissions from power plants is "smart strategy."

"The old is on its way out," Sen. Jim Inhofe (R-Okla.) said yesterday. "[Pruitt is] very much enthusiastic about getting it done — it’s just there isn’t time to do everything at once," Inhofe told E&E News.

The White House has sidestepped questions about whether the administration might target the 2009 endangerment finding that is the legal foundation for most regulations aimed at cutting carbon dioxide, as some transition officials have suggested (E&E News PM, Jan. 31).

Inhofe, former chairman of the Senate Environment and Public Works Committee, and other GOP senators central to the efforts said they had not been consulted on tactics. But they had no doubt a plan is in the works.

"I haven’t heard that actually verbalized to me as a strategy. I think it’s a smart strategy," said Sen. Shelley Moore Capito (R-W.Va.).

"Get your people in place," she said, urging confirmation of Rick Perry to head the Energy Department. "I would think you’d want your team together so you can see which way you want to move forward."

Twenty-four states opposing the plan in court called on the administration to issue an executive order "on day one" laying out the view that the rule is unlawful and that EPA lacks authority to enforce it. They said it was necessary to "send an immediate and strong message to States and regulated entities that the Administration will not enforce the Rule" (E&E News PM, Dec. 15, 2016).

"Whether they do through attorney general or EPA is up to them, but most certainly if they can begin that process it’s going to be very helpful. … Normally agency heads are put in place in a more expeditious manner than what we have been able to do so far," Rounds said.

Sen. John Hoeven (R-N.D.) said he understands the White House is looking at the regulatory relief it can provide through executive action, while Congress looks at what it can do through the Congressional Review Act, adding, "And we’re trying to work together to do it as effectively and efficiently as possible."

Sen. Tom Carper (D-Del.), ranking member of the EPW Committee, suggested Trump needs to be reminded that backsliding on the deal would thwart efforts to be a global leader on climate.

"I’m not sure the president really knows what the Clean Power Plan is, what it would do. But we are picking up signals that they are not crazy about it," he joked.

"I would just remind him that we’re trying to provide a leadership role for the world as a country to say climate change is real, sea-level rise is real and we need to provide some leadership by example," Carper said.

If the White House is waiting for Pruitt to announce action on the Clean Power Plan, Sen. Gary Peters (D-Mich.) said he sees it as another reason to oppose the nomination.

"It’s a laundry list of reasons why he is bad for the country and bad for the protection of the environment of our country," Peters said.

Sen. Joe Manchin (D-W.Va.), one of the few members of his party to oppose Obama’s signature climate rule, explained he and Pruitt seem to be on the same page about the regulation.

"Scott basically understands what we are going through in West Virginia coming from Oklahoma," Manchin said. He added he is still waiting on more disclosure and not yet decided about his vote.

A spokesman for Environment and Public Works Chairman John Barrasso (R-Wyo.) said that in the wake of the Supreme Court stay on the rule and ongoing litigation, he "looks forward to working with the Trump administration to determine the best and most lawful path forward on the Clean Power Plan."

Sen. John Boozman (R-Ark.) agreed Pruitt would be confirmed shortly, and the process would move along.

"At the end of the day I’m also a person that ran against removing this type of regulation. At the end of the day, we’re going to get this thing done and so to be honest, I don’t think it really makes a difference one way or the other how quickly it moves," Boozman said.