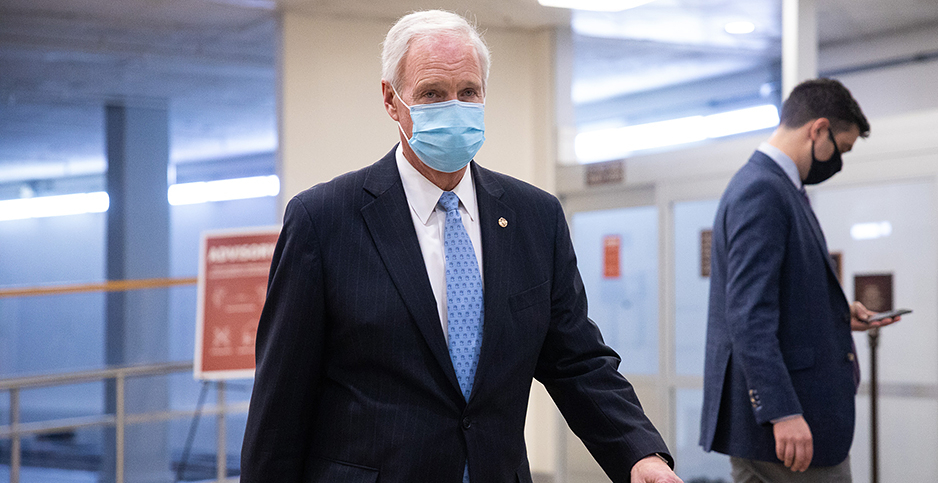 A Republican senator yesterday forced the reading of the Senate’s $1.9 trillion COVID-19 relief bill, reviving a protest tactic the GOP employed a decade ago against cap-and-trade climate change legislation.

Senate clerks read aloud the text of Democrats’ 628-page substitute amendment for more than ten hours, after Sen. Ron Johnson’s midafternoon refusal to allow the reading to be waived, as is customary, citing the mounting federal deficit and the lack of GOP input into the measure.

"These are astonishing sums that we’re talking about, and the majority party here wants to jam this through, through a reconciliation process, no consultation with our side," the Wisconsin Republican said Wednesday. "Just blow it through here, 20 hours of debate, a vote-a-rama, pass $1.9 trillion in spending, and go home."

During a markup of the bill earlier in the year, Republicans on the Energy and Commerce Committee also flirted with forcing a reading of the entire bill, but retreated after then-Chairman Henry Waxman (D-Calif.) hired a speed reader. Despite the antics, the House passed the Waxman-Markey climate bill 219-212 in June of 2009.

Senate Majority Leader Chuck Schumer (D-N.Y.) said yesterday that the Senate will stay in session and finish the pandemic package this week, "no matter how long it takes."

"We all know this will merely delay the inevitable," Schumer said of Johnson’s demand. "It will accomplish little more than a few sore throats for the Senate clerks."

A marathon session of amendment votes will begin this afternoon, possibly heading into the weekend.

Ahead of the bill’s reading, the Senate voted 51-50 along party lines to proceed to the COVID-19 package, with Vice President Kamala Harris breaking the tie.

Democrats have been courting Sen. Lisa Murkowski (R-Alaska) to support the measure even though it can avoid a filibuster under budget reconciliation rules.

Like the House bill, it also includes $50 billion for the Federal Emergency Management Agency’s disaster fund, $30 billion for public transit agencies, and $95 million for the Fish and Wildlife Service for preventing the spread of COVID-19 and other diseases by wildlife.

Absent from the bill is the $15-an-hour federal minimum wage hike that passed the House but was ruled ineligible under reconciliation rules last week by the Senate parliamentarian.

Senate Budget Committee Chairman Bernie Sanders (I-Vt.) said yesterday that he intends to offer an amendment to restore the wage hike to the package, but it’s unlikely to win any GOP support.

Progressive groups have called on Democrats to overturn the parliamentarian’s ruling, which could be done by a simple majority.

That could create a path to load up future reconciliation bills with provisions that go beyond the strict requirements of the so-called Byrd rule, named after former Senate Democratic Leader Robert Byrd of West Virginia.

The Sunrise Movement called for doing just that, saying it could enable the inclusion of a clean energy standard in a later reconciliation package focused on infrastructure (E&E Daily, March 1).

But Democrats haven’t indicated any plans to overturn the parliamentarian, and would face opposition from moderates within their caucus.

The U.S. Chamber of Commerce warned senators yesterday that it will "key vote" any efforts to scrap the Byrd rile or change the legislative filibuster.

"Removing these requirements and attempting to pass legislation on a partisan, majoritarian basis is likely to result in rushed, ill-considered legislation that lacks the buy-in necessary to create durable, long-term policy," the group wrote.

"Such changes would also further erode what is already very diminished trust in our democratic institutions."