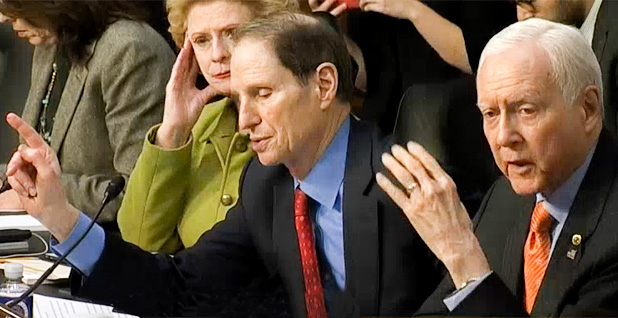 Senate Republicans last night punted on a series of tough decisions on key energy tax breaks in the latest version of their tax bill, while injecting the tricky politics of health care into the push to open the Arctic National Wildlife Refuge to oil drilling.

The revised chairman’s mark, released by Finance Chairman Orrin Hatch (R-Utah), makes no mention of orphaned renewables, biodiesel, nuclear or carbon capture and sequestration credits sought by members of both parties in the more than 350 amendments filed to the bill (E&E Daily, Nov. 14).

However, the revised measure would repeal the individual mandate tax that lies at the heart of the Affordable Care Act (ACA), the Obama-era health care law that Republicans have failed repeatedly to repeal after years of promises to do so.

While quelling growing furor among conservatives by repealing the Obamacare tax, the move also would raise $318 billion over 10 years, according to the Joint Committee on Taxation (JCT), easing concerns that the bill would exceed fiscal limits.

"By scrapping this unpopular tax from an unworkable law, we not only ease the financial burdens already associated with the mandate, but also generate additional revenue to provide more tax relief to these individuals," Hatch said in a statement.

But reviving the health care fight in tax reform also adds a wrinkle to the ANWR fight, which will flare again this morning down the hall from the ongoing Finance Committee markup, as Energy and Natural Resources Chairwoman Lisa Murkowski (R-Alaska) prepares to move legislation through her committee to open the reserve to drilling.

Murkowski, along with fellow GOPers Susan Collins of Maine and John McCain of Arizona, voted down the Senate GOP’s efforts to repeal much of the ACA. In doing so, she repeatedly cited the potential impact on health coverage in her state, which has expanded under the law.

Murkowski now may face a choice of whether to secure the legislative victory on ANWR that has eluded the Alaska delegation — including her father, former Energy Chairman Frank Murkowski (R-Alaska) — for nearly 40 years, or maintain health coverage for thousands of Alaskans.

She has sidestepped the question all week. "We are still working on what may come with the individual mandate," Murkowski said when pressed by reporters yesterday.

Instead she’s tried to focus on the markup, where she said Democrats would be able to offer unlimited amendments to the bill. "We are going to process however many amendments they want to bring forward," she said.

Coincidentally or not, there is one section added to Hatch’s revised bill that wasn’t present in the earlier version: a modification of the tax treatment of Alaska Native corporations and settlement trusts.

As the Finance Committee heads into day three of the markup, Democrats face a shrinking window of time to offer amendments, a number of which are energy-related (E&E Daily, Nov. 14).

Sen. Tom Carper (D-Del.), who has filed several energy amendments, said sponsors have to weigh "how relatively important" their offerings are, as well as the likelihood of picking up some Republican support.

He noted that Republicans on the Finance Committee were working yesterday to get the orphaned renewable credits added back into the bill. "Hopefully they’ll be successful," Carper told reporters.

But conservative groups that oppose renewable tax breaks are keeping up the pressure. "Special carve outs for ‘green energy’ industries" were among the examples of amendments to "redistribute hundreds of billions of dollars from hardworking taxpayers to select corporations and industries that can afford to lobby for special treatment," wrote Americans for Prosperity and Freedom Partners to Hatch yesterday.

The groups, which have financial ties to the Koch brothers, also came out against tax breaks for refined coal and nuclear energy.

Other groups weighed in with the committee on various amendments as well.

The Society of Independent Gasoline Marketers of America (SIGMA) sent a letter to the committee urging an extension and phase-out of the biodiesel tax credit but opposing efforts to change the break to a producer’s credit, as Sen. Chuck Grassley (R-Iowa) has proposed.

The American Institute of Architects this week urged Senate tax-writers to restore the Section 179D tax credit, which provides a deduction for the installation of energy-efficient components in commercial and multi-family buildings.

Renewable critics got a boost from longtime wind energy critic Sen. Lamar Alexander (R-Tenn.), who took to the floor yesterday to "nominate" the production tax credit for repeal. He also called on Congress to rid the code of breaks for "mature technology."

"I’m here today to challenge my colleagues to be willing to consider all energy subsidies for mature technologies — wind, solar, oil and gas — as candidates for elimination in a tax reform bill," he said on the Senate floor. "These dollars could be better spent to lower rates for taxpayers."

But Sen. Heidi Heitkamp (D-N.D.), who Republicans are courting to support tax reform, made clear that she wants a host of energy tax issues resolved in whatever final package emerges, including the 2015 deal that extended the PTC and investment tax credit, the orphaned renewables that are extended in the House tax bill but not the Senate’s, as well as a change to the 45Q credit to boost carbon capture and sequestration.

"We’re waiting to see kind of where this thing ends up, but if we’re going to do legacy tax credits for energy, it should be all of the legacy tax credits," she told E&E News. "We need to improve 45Q, but we need to maintain the deal we struck on PTCs and ITCs. We need to take care of the orphans."

Meanwhile, the House Rules Committee met last night to pave the way for floor debate on the lower chamber’s tax bill today. No amendments will be allowed to the carefully crafted legislation.

House Republicans leaders expect to pass the measure tomorrow, after President Trump meets with GOP lawmakers on Capitol Hill to press for the tax overhaul.

The Sierra Club yesterday announced it was launching a digital ad campaign to sway 29 House Republicans, many of whom are moderates or face tough re-election fights, to oppose the House tax plan.

"Members of Congress should vote against this tax scheme because it is a massive tax cut for the richest 1% and corporate polluters that will result in deep cuts to programs that safeguard public health, clean air and water, and our public lands," said Sierra Club Legislative Director Melinda Pierce in a statement.

"The GOP’s plan even manages to raise taxes on the middle class, while sneaking in an outrageous attack on the Arctic Refuge by opening it up for drilling," she said.