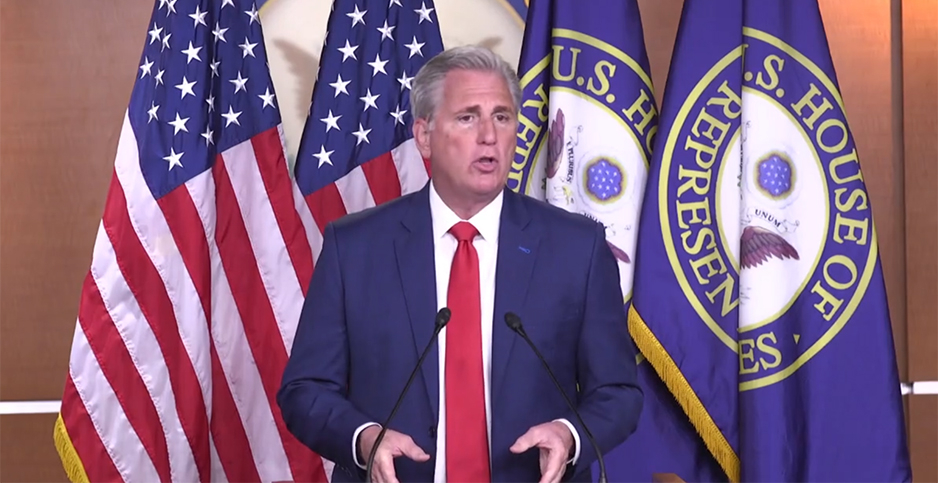 More than a dozen House races central to the congressional energy and environment agenda remained unresolved this morning, with contests too close to call or mail-in ballots still being counted.

Democrats maintained their control of the chamber today but continued to shed seats to Republican challengers — a reversal of fortunes for Democrats, who entered Election Day confident they would actually expand their majority.

House Republican leader Kevin McCarthy was defiant when speaking with reporters this afternoon, noting that Democrats were hoping to gain upward of 15 seats and may end up losing roughly 10 or more.

"They were wrong," McCarthy (R-Calif.) said of analysts and Democrats, and cited President Trump’s "monumental help" in energizing the GOP base.

McCarthy now has greater momentum in his quest to stay atop the House Republican caucus. He appeared to question House Speaker Nancy Pelosi’s (D-Calif.) future atop hers.

"As of now, we have seven GOP pickups," McCarthy continued. "We have 11 outstanding races I feel very confident we will [win]."

As of noon today, Rep. TJ Cox (D-Calif.), chairman of the House Natural Resources Subcommittee on Oversight and Investigations, was trailing David Valadao — the Republican he ousted in 2018 — by a little over 2 percentage points with 21% of the votes accounted for.

With Democrats on track to lose at least seven of their own members, and so far unsuccessful in unseating any Republican incumbents, McCarthy was compelled to take a victory lap.

After all, Michelle Fischbach, the former Republican lieutenant governor of Minnesota, defeated House Agriculture Chairman Collin Peterson, a moderate Democrat from a Trump-leaning district whom the GOP has been looking to unseat for years.

And Rep. Xochitl Torres Small (D-N.M.), who tried to distance herself from her party by supporting hydraulic fracturing, was ultimately unable to untie herself from Democrats and lost in a rematch to former Republican state Rep. Yvette Herrell.

McCarthy was also bullish on Trump’s chances and echoed the president’s camp in suggesting possible legal challenges to at least some votes (see related story).

"We will continue to fight for his reelection until all the votes legally cast are counted," said McCarthy. "This election has seen record voter turnout that America has not seen in a century, and the American people must be assured that it is both fair and transparent."

There were some bright spots today for House Democrats looking to keep losses at bay.

Rep. Elaine Luria (D-Va.) was declared the winner in a nail-biter rematch with former GOP Rep. Scott Taylor, whom she ousted two years ago in their coastal district, which has seen significant flooding due to climate change.

Rep. Angie Craig (D-Minn.), who was seen earlier this year as a likely member to land a coveted spot on the powerful Energy and Commerce Committee in the next Congress, will likely get the chance to make her case for that assignment.

She is declaring victory against former Marine Tyler Kistner, with 100% of votes counted in a race she is leading by a little over 2 percentage points.

For Republicans who wanted 2020 to be a referendum on their party’s commitment to environmental concerns, there also were targeted victories to celebrate.

He continued: "Americans went to the polls with climate on their minds and they chose real solutions."

The Mace-Cunningham face-off was defined by disagreements about how to combat climate change and debates over which candidate had the best plan to stop offshore drilling off the state’s coast.

Mace was declared the winner by the Associated Press early this morning, but hours later Cunningham’s campaign released a statement suggesting he would not concede, adding more anxiety as political observers await full results across the map — for the House, the Senate and the presidency.

"There are tens of thousands of ballots outstanding across the district. Both candidates have agreed that every ballot must be counted and every voice heard before an election result is called," said Cunningham’s campaign manager, Allie Watters.