Gorsuch light on energy issues but ‘smart as hell’ 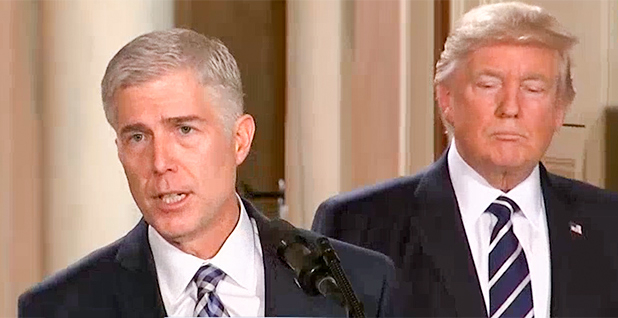 President Trump announced Judge Neil Gorsuch last night as his nominee to the Supreme Court to fill its vacancy. Photo courtesy of C-SPAN.

A federal judge from Colorado is President Trump’s pick to replace the late Justice Antonin Scalia on the Supreme Court.

Following a suspenseful buildup to last night’s announcement, Trump chose Judge Neil Gorsuch from the 10th U.S. Circuit Court of Appeals as his nominee for the open seat on the high court.

Gorsuch’s record on energy and environmental issues is light, but experts have described the Colorado native as well-qualified and traditionally conservative — a logical successor to conservative icon Scalia.

"The court is going to largely seem to stay for now in the same position it was in when Scalia was alive," Dorsey & Whitney attorney Jim Rubin said. "The opinions may be less colorful or not, but the votes will probably still be very similar."

BakerHostetler attorney Mark Barron, who practices in the 10th Circuit, praised him as having Scalia’s brand of "intellectual firepower."

"I think, regardless of one’s political perspective, that Gorsuch is generally considered to have extraordinary intellectual firepower — quite similar to Scalia in the sense that, even those that disagree with him strenuously think he is smart as hell," Barron said.

In remarks following Trump’s announcement, Gorsuch highlighted his commitment to impartiality, independence and collegiality on the bench.

"It is the role of judges to apply, not alter, the work of the people’s representatives," he said. "A judge who likes every outcome he reaches is very likely a bad judge, stretching for results he prefers rather than those the law demands."

Road to the Supreme Court

A 49-year-old Coloradan who enjoys skiing and fly-fishing, Gorsuch also comes with the East Coast Ivy League pedigree typical of Supreme Court justices. He has a bachelor’s degree from Columbia University, a law degree from Harvard University and a doctoral degree from Oxford University. His mother, Anne Gorsuch Burford, led U.S. EPA for two years during the Reagan administration.

He clerked for two Supreme Court justices, Anthony Kennedy and the late Byron White, before heading into private practice and briefly serving as principal deputy associate attorney general in the Justice Department.

Rubin, who worked with Gorsuch at the Justice Department, said the young lawyer was well-received by the Environment and Natural Resources Division, which the associate’s office oversees.

"He was obviously a very bright and open guy," Rubin said. "He did not have a large degree of environmental background. … He was interested and willing to work with the division, and he didn’t have any preconceived notions."

President George W. Bush appointed him to the 10th Circuit in 2006. Then-Sen. Ken Salazar (D-Colo.), who went on to serve as Interior secretary under President Obama, introduced Gorsuch for his Senate confirmation hearing, praising him as "very intelligent, thoughtful and appreciative of the great honor it is to be nominated to the Federal bench."

Responding to questions from Sen. Lindsey Graham (R-S.C.) during his hearing, Gorsuch adeptly avoided committing to a particular legal philosophy.

"But if I were to be confirmed, senator, I resist pigeonholes," he said. "I think those are not terribly helpful, pigeonholing someone as having this philosophy or that philosophy. They often surprise you. People do unexpected things and pigeonholes ignore gray areas in the law, of which there are a great many."

He pledged, however, to not be swayed by "personal politics, policy preferences, or what you ate for breakfast."

Gorsuch’s personal legal style has nevertheless taken shape during his years on the 10th Circuit.

When it comes to agency regulations, Gorsuch is most notable for his extreme distaste for Chevron deference, a legal doctrine under which judges typically defer to an agency’s judgment when it is interpreting ambiguous law.

Though deference is not strictly an environmental issue, it crops up frequently in litigation surrounding technical rules from U.S. EPA, the Interior Department and other agencies. Gorsuch has criticized the doctrine in lectures and opinions from the bench.

In a detailed concurring opinion dealing with immigration issues in August, Gorsuch assailed Chevron deference as "more than a little difficult to square" with the Founding Fathers’ intentions (Greenwire, Aug. 24, 2016). And in a 2011 dissent in a case related to mining worker safety, Gorsuch expressed frustration with what he considered overly powerful executive agencies.

"Administrative agencies enjoy remarkable powers in our legal order," he wrote in Compass Environmental v. Occupational Safety and Health Administration. "Their interpretations of ambiguous statutes control even when most everyone thinks Congress really meant something else. Their regulations bind as long as they can make the modest boast that they haven’t behaved arbitrarily or capriciously. Their factual findings rule the day unless someone can show they have not just erred but clearly erred."

"The big fear many observers have if Chevron is overturned is that it would make agency rule making even more difficult, more uncertain and more vulnerable to legal challenge," she wrote. "That would be bad news for environmental protection."

"What it signals is just that deeper sort of skepticism [of agencies] and the willingness to accept the industry arguments," Hartl said. "His track record is a little limited, but I think it’s likely that he’ll follow that pattern, and obviously that’s not good for us."

A move away from Chevron deference on the Supreme Court could create serious uncertainty not just for environmental rules but for any federal regulations.

In litigation over the Obama administration’s Clean Power Plan, for example, the question of whether Obama’s EPA is entitled to wide deference or should be subject to a stricter standard on its interpretation of the Clean Air Act could prove critical if the case reaches the Supreme Court — still a possibility given the long lead time needed for the Trump administration to rescind the climate rule.

Rubin added that moving away from the doctrine is a "double-edged sword" that could also disfavor Republicans on regulations they push forward.

Another broad issue that could sway environmental litigation is Gorsuch’s view of standing, a legal bar for bringing a lawsuit that requires plaintiffs to show, among other things, that they have been injured by the action they are challenging. A restrictive view on standing can be particularly harmful for environmental groups, who sometimes allege harms others consider abstract or indirect.

If confirmed, Gorsuch will be the first Supreme Court justice to come from the ranks of the 10th Circuit. At the Denver-based appellate court, he’s seen several cases dealing with energy, public lands and tribal matters, though he has not written any blockbuster opinions on those issues.

Gorsuch was the lone dissenting voice in a panel decision to reverse a lower court’s refusal to allow CBD and two other groups to participate in a lawsuit related to off-highway vehicle use in New Mexico’s Santa Fe National Forest. Gorsuch argued that the environmental groups should not be allowed to intervene in the case because their interests were already adequately represented by government agencies.

On the flip side, Gorsuch in 2015 rejected a challenge from the conservative Energy & Environment Legal Institute to Colorado’s renewable energy standard.

In a 2011 opinion, he rejected a challenge to a U.S. Forest Service decision to charge a fee for recreation at Colorado’s Mount Evans. In a 2010 decision, he joined a panel of judges in upholding an Interior Department decision to allow coal mining plans to move forward in eastern Utah’s Lila Canyon.

Gorsuch also wrote the majority opinion in a 2010 en banc decision vacating an EPA determination that a mining parcel in New Mexico qualified as "Indian land" and required a Safe Drinking Water Act permit from EPA. And in 2009, he rejected a mining company’s challenge to a government order that the company pay black lung benefits to a longtime employee.

He also waded into several disputes involving energy companies. In a 2011 opinion, he revived a challenge to an Oklahoma rural electric cooperative’s alleged monopolization of electricity services. He also authored a 2008 opinion finding that a mining company could not invoke force majeure for a labor dispute that allegedly prevented the company from delivering agreed-upon volumes of coal to an electric utility.

Though not matching the famously caustic style of Scalia’s writing, Gorsuch’s opinions are generally snappy, conversational and at times stinging.

Rubin, the Dorsey & Whitney attorney, noted that while environmental groups are ready to seize on any Trump nominee for the Supreme Court, Gorsuch’s record does not demonstrate an anti-environment slant.

"I think environmental groups who are challenging him are doing it because of the fear that he’s going to have a very strict view on environmental regulation," he said. "That might be true, but I don’t think he’s shown himself to be an enemy of the environment, I think he’s just shown to be a fairly conservative jurist, and that’ll cover any regulation."

Hartl said he believes the bar has simply been moved so low that any "not nuts" nominee seems like a solid choice.

"I feel like we live in this Superman-Bizarro World now where any time Trump appoints someone who’s not clinically insane, there’s an instinct to go, ‘Wow, this guy is not nuts. Kudos, President Trump, for not appointing a lunatic,’" he said. "I guess I feel a small amount of comfort, but that’s a testament to the times we live in."

Critics of the Trump administration have already geared up for a fight. Environmentalists are among a growing number of liberal groups calling on Senate Democrats to filibuster the nomination.

"Democrats must stand with the majority in the streets who see that Donald Trump and his enablers are running roughshod over our Constitution and threatening our Democracy," Friends of the Earth President Erich Pica said in a statement. "Senate Democrats are one of the last remaining checks on Trump’s power and they should not let him make a lifetime Supreme Court appointment."

Conservatives have panned the approach as obstructionist.

"This is the type of partisan politics the American people just rejected in November," Judicial Crisis Network chief counsel Carrie Severino said in a statement. "Our campaign will be holding the Senate Democrats up in 2018 accountable for their choice whether to lock arms with Chuck Schumer in his plan to block a nominee for four to eight years, or to represent their constituents who voted for President Trump and want to see his nominee get a fair shake."

Senate Republicans held up the nomination of Garland, President Obama’s pick for Scalia’s seat, for more than six months before the November election.