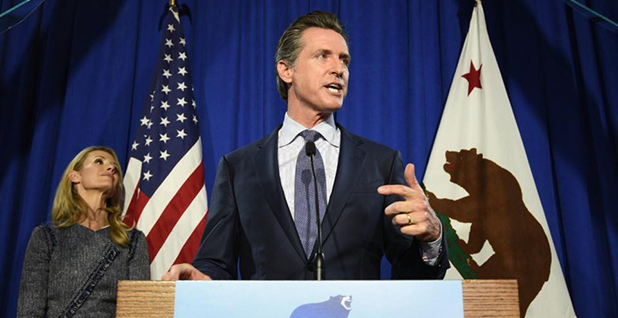 California Gov. Gavin Newsom (D) is calling on a federal judge to throw out a plan for utility Pacific Gas and Electric Co. to emerge from bankruptcy. Newsom/Facebook

California Gov. Gavin Newsom (D) yesterday vehemently objected to a bankruptcy reorganization plan by Pacific Gas and Electric Co. to pay $25.5 billion to settle wildfire damage claims, just as the utility had announced an agreement with the one other major remaining opponent to its plan.

Just prior to a court hearing before U.S. Bankruptcy Court Judge Dennis Montali, scheduled for today, Newsom again leveled a broadside against the PG&E plan, as he had last month following the energy company’s announcement of an agreement with the representatives of tens of thousands of wildfire victims.

Newsom, through his outside attorneys in the bankruptcy case, said yesterday he "is pursuing strategies to protect California’s interests through further intervention, including a state takeover of the utility."

Whether the governor’s bottom line is a state takeover and conversion of California’s largest investor-owned utility into a single or multiple public utilities or whether his scathing rebuke is meant to ratchet up pressure on PG&E to accede to his demands was not clear.

But his request to Montali to withhold approval of the PG&E proposal raises new doubts about whether a revised plan can be negotiated among representatives of fire victims, investors, insurance interests and other creditors in time to meet a state-set June 30 deadline.

PG&E must exit bankruptcy by that date with a financing and restructuring agreement approved by the court and the bankruptcy parties in order to qualify for a wildlife claims insurance fund created by the Legislature last year to aid future fire victims. Participation in the fund is considered critical to the company’s future.

Newsom’s court filing reiterated his demands last month for fundamental changes in PG&E’s governance and operations. He wants strong oversight to protect against negligent operations and inadequate safety procedures that could expose state residents to renewed wildfire risks. He seeks the right to name directors to PG&E’s board if the company succeeds in emerging from bankruptcy, and a fast-track process for a state takeover if the company fails to meet wildfire threat regulations.

He also opposes the financial structure of the PG&E plan, asserting that it creates too much debt, jeopardizing the company’s ability to compensate wildfire victims and continue to advance the state’s challenging clean energy and climate goals.

"PG&E’s historical failures — including decades of mismanagement and inadequate investments in fire safety and fire prevention — require that any plan of reorganization must position the reorganized entity for transformation, include stringent governance and management requirements and enforcement mechanisms, and provide for a capital structure that allows the reorganized entity to undertake critical safety investments," Newsom’s filing said.

The governor accused PG&E executives of ignoring his criticism of the plan, saying they "have yet to make a single modification … to address its many deficiencies."

"It seems clear that rather than amend the Debtors’ Plan to incorporate the necessary changes, the Debtors instead intend to try to leverage the Chapter 11 process to force the California Public Utilities Commission to approve — and the state of California to accept — a sub-optimal plan," the filing also said.

In response, PG&E promised "additional changes to the plan are forthcoming. We will continue to engage with the Governor’s office to address his concerns."

Shortly before the governor filed his objections, PG&E announced it had gained the support of a group of bondholders that had advanced a competing proposal to resolve wildfire claims. That development signaled that the path was clearing for the PG&E plan.

Led by activist investor Elliott Management Corp. and Pacific Investment Management Co., the bond market powerhouse, the bondholder group had proposed an all-cash plan to settle PG&E’s wildfire debts and other claims, versus a larger package of cash and stock from the utility. A key part of this agreement involves issuance of new debt by PG&E to replace higher-rate bondholder notes.

PG&E had previously won backing from representatives of the largest group of wildfire victims, who stood to receive $13.5 billion in damage payments, provided the utility was successful in attracting investments in the victims’ trust fund it proposed to create to cover part of the compensation plan. It also had the support of a group of insurance claim holders, who were allotted $11 billion.

The status of the negotiations over compensation had been exhaustively reviewed at a Dec. 17 hearing before Judge Montali.

Then, Newsom attorney Nancy Mitchell — while emphasizing that the governor’s demands remained unmet — said the discussions with PG&E were going well. She gave an unusual pat on the back to PG&E. "They have been tremendous in trying to work on getting the plan close.

"We are not there, and I can’t stand here and tell your honor that two weeks from now or a month from now that this plan is going to be A.B. 1054 compliant," she said, referring to conditions in legislation last year that created the state wildfire victims insurance fund.

Speaking for PG&E then, attorney Kevin Orsini said, "As I think Ms. Mitchell would confirm, we have been engaged in constructive dialogue with the governor’s representatives to address the issues he’s raising."

Others close to the situation said on the contrary, recent meetings have been tense and unproductive.

The mood in that session was generally hopeful about a resolution.

"Notwithstanding the fact that the governor is sending nastygrams to PG&E every few days, we have not lost hope that the debtor [PG&E] will be able to — as it advises us — it will be able to improve the plan to a point where it is A.B. 1054 compliant and can be confirmed" in bankruptcy court by June, Cecily Ann Dumas, an attorney for the major victims group, said at the December hearing.

When PG&E signaled last month that discussions with the bondholder group were progressing, there was more optimism.

"The critical missing element is the governor," said Ralph Cavanagh, senior attorney with the Natural Resources Defense Council, who spoke with E&E News yesterday before the governor’s new objections were known. "The governor had set out conditions PG&E should be able to meet." Cavanagh said he expects PG&E to file an amended reorganization plan with changes in governance that satisfies the governor.

"All of PG&E’s constituents, including the governor, want to see them get out of bankruptcy. We can’t lose sight of the fact that nobody wins if they don’t. It can’t do all that’s needed if there is an anvil around its neck," Cavanagh said.

"A settlement between the bondholders and the company that results in a consensual plan would increase our previous ’80 percent of the way there’ view to meeting the June 30th emergence deadline to 90 percent," said the investment research firm CreditSights Inc., in a report last week, based on news reports of a potential deal between PG&E and the bondholder group.

Now the outlook is again filled with questions.

A PG&E plan must be approved by the California Public Utilities Commission, headed by Newsom appointee Marybel Batjer. Will the commission support Newsom if he were to insist on a state takeover? Could the governor win the votes for a takeover in the Legislature? Would state lawmakers want the responsibility of state control of a fire-plagued utility?

Will the governor’s opposition upset settlement negotiations, leaving too little time to wrap up a new agreement before June 30? The risk of delay was a constant theme in the Dec. 17 hearing.

Dumas, the victims’ group attorney, noted that some fire victims had been waiting for compensation since 2015.

Some, she said, "still have temporary housing and need money. So we understand that people need to start rebuilding their lives, and in order to do that they need some money" from this case.

Her colleague at the BakerHostetler law firm, Robert Julian, added, "The victims are being used as a pawn by almost everybody in this case. The victims and their lawyers are kind of chess pieces. The governor uses us when they want to. The bondholders use them."

Julian said it was time to get the pieces on the table and move to confirmation.