Govt. scientist blocked from talking about climate and fire 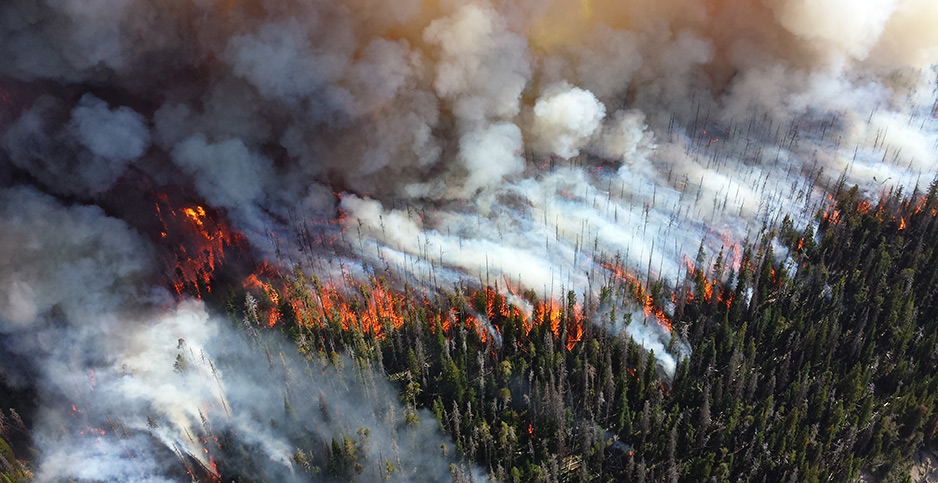 Some government scientists are being prevented from showcasing their research on wildfire. Mike Lewelling/National Park Service/Flickr

A U.S. Forest Service scientist who was scheduled to talk about the role that climate change plays in wildfire conditions was denied approval to attend the conference featuring fire experts from around the country.

William Jolly, a research ecologist with the agency’s Rocky Mountain Research Station in Missoula, Mont., was supposed to give a 30-minute presentation titled "Climate-Induced Variations in Global Severe Fire Weather Conditions" at the International Fire Congress in Orlando, Fla., next month. The event is hosted by the Association for Fire Ecology (AFE).

The Department of Agriculture, the Forest Service’s parent agency, said regional managers largely decide who gets to go to conferences based in part on the financial resources that are available. Political appointees in Washington have the final say but do not typically weigh in on which individuals are selected.

"Our front line supervisors and managers weigh a variety of factors including cost, frequency of employee travel, conference location, the number of other employees attending, among other factors in making our business decisions about conference attendance," said spokesman Mike Illenberg in a statement. "Based on their recommendations and resource availability, Forest Service leadership gives final approval."

Jolly’s presentation was slated to be part of a special session exploring the connection between wildfire and climate change. It focuses on what scientists can learn about fire behavior in a warming future by looking at clues from the past, according to Anthony Westerling, a professor at the University of California who is moderating the session.

"It’s kind of weird that they would make it hard for a government scientist to take part in this because managing wildfire is a huge challenge logistically and financially on a vast array of federal lands," he said. "These scientists, by participating in these kinds of society meetings, share their thoughts and hear other people’s thoughts, which is important because their work is supposed to form how these lands are managed and how we prepare for and adapt under climate change."

Jolly is not the only scientist whose request was denied. No travel authorizations were given to researchers from the Rocky Mountain Research Station’s Human Dimensions Science Program, according to AFE. That includes Karin Riley, a research ecologist who studies the relationship between climate and wildfire. Riley is vice president of AFE’s board of directors.

Three U.S. Geological Survey researchers who are scheduled to give presentations at the wildfire conference next month have been in limbo for months while their travel request is reviewed. All three scientists are slated to speak about climate change.

A total of 13 USGS scientists are waiting for a decision. Catherine Puckett, a USGS spokeswoman, said in an email that the agency is following "normal conference travel procedures." She anticipates that the researchers’ requests will be submitted to the USGS acting director for approval by the end of the week.

The science shared at the Fire Congress draws on real world catastrophes. The United States is experiencing its most expensive fire season in history, with more than 8.8 million acres burned, according to the National Interagency Fire Center.

Massive fires have rained chaos on communities in Montana and California, in part due to climate change increasing the number of fires and making them more severe. A 2015 report by the Forest Service found that modern fire seasons are 78 days longer and burn twice as many acres as they did in 1970. The agency predicted that the number of acres burned could double again by 2050 (Climatewire, Aug. 6, 2015).

A total of 48 Forest Service employees have been approved to speak at the conference, the agency said. About 110 scientists from across the government made requests to attend the event.

At those levels, federal participation would be significantly down for the 2017 Fire Congress. At the last Congress, held in San Antonio in 2015, 180 federal employees attended out of the 578 total participants. Nearly 70 percent of all government participants were USFS employees, according to AFE.

"While the number of acres burned, homes destroyed, civilians killed, and tax dollars spent on suppression are going way up, why is the number of Forest Service scientists and managers meeting at professional science conferences and technical training workshops going way down?" said Timothy Ingalsbee, executive director of Firefighters United for Safety, Ethics, and Ecology.

In light of this year’s devastating fire season, AFE says the chronic challenges of getting approval for Forest Service and other federal scientists to attend professional conferences, where they can share their research and learn from colleagues, is shortsighted.

"As taxpayers, our members share the goal of avoiding wasteful government spending, but restricting fire managers and scientists from meeting at conferences is a case of being ‘penny wise, pound foolish,’" the group’s president, Leda Kobziar, wrote in an October letter to USDA Secretary Sonny Perdue and Interior Secretary Ryan Zinke.

The group didn’t focus its criticism on the Trump administration. It pointed to challenges around travel restrictions for scientists dating back to the Obama administration, which was buffeted by revelations that federal officials had sometimes thrown opulent parties.

In some cases, travel restrictions seemed to lighten under new Republican leadership. In June, Office of Budget and Management Director Mick Mulvaney issued a memo to agency heads rolling back dozens of "low-value, duplicative and obsolete activities." That included a proposal to partially eliminate reviews of federally sponsored conferences. OMB noted that the process has "become incredibly burdensome for agencies."

For government scientists, restrictions on travel and giving presentations could negatively affect their job performance. Publicizing their work can be one metric used to evaluate employee merit.