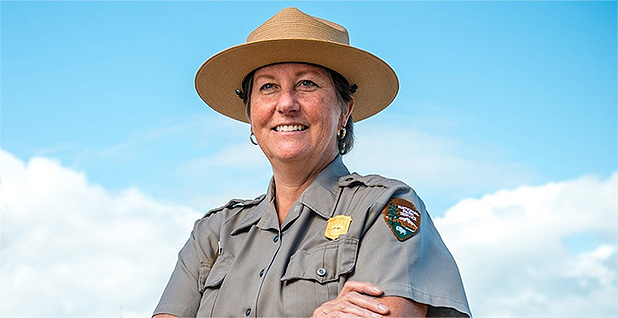 Chris Lehnertz, the embattled superintendent of Grand Canyon National Park, resigned this morning, shocking the National Park Service and employees at one of the nation’s most popular parks.

"The events of the past few months have led me to reflect on my personal and professional priorities and to reassess how I can make the greatest difference in people’s lives," she said in a statement released by her attorney. "While I will always be dedicated to the protection of public lands, I have decided to resign my position as superintendent of one of the most inspirational places on earth in order to also pursue matters of significant importance to me, including women’s empowerment, social justice, and supporting families living with the challenges of Alzheimer’s."

Her last day will be March 31. Lehnertz said she’s committed "to a smooth transition of responsibilities."

Lehnertz had been a rising star for NPS, an openly gay superintendent and the first woman to lead the Grand Canyon.

She announced her decision in an email to employees, saying "the past several months have been life changing for me."

"My experiences have served to reinforce the core of my life’s values — compassion, fairness, honesty, civility, and respect, and I will always stay involved in protecting our nation’s public lands and democratic principles. … Twenty-nine years of federal service have been a true gift to me, made meaningful by both the work and more importantly, the colleagues and friends who have delivered so much to the nation," she wrote.

Lehnertz took over as superintendent in 2016, called in to clean up after a sexual harassment scandal resulted in the departure of the park’s previous superintendent.

She had been involved in two federal investigations in recent months.

In October, she was transferred to another job when the Interior Department’s Office of Inspector General began a probe into allegations that she had created a hostile work environment for senior leaders, particularly men, and that she had wasted $180,000 on renovations for a park residence.

While Lehnertz was cleared of any wrongdoing in that investigation last week, her attorney, Kevin Evans, said he had advised her not to return to her job until NPS could guarantee her safety.

Those safety concerns surfaced after the park’s health and wellness manager said that thousands of employees and visitors may have been exposed to high levels of radiation after three 5-gallon buckets of uranium ore were discovered in the park’s museum collections building last year. NPS officials yesterday said early results from an investigation showed that radiation levels at the park were "significantly lower than initially believed."

Lehnertz became a target when Elston "Swede" Stephenson accused NPS of trying to cover up "a top management failure" when the uranium was discovered.

Evans then advised Lehnertz last week to not immediately return to Grand Canyon, since she had been subjected to a "continued barrage of malicious and defamatory statements" in connection with the uranium probe.

But he said today that the uranium investigation was the not the main factor that led her to leave.

"I would say that probably is not the reason," Evans said. "Negotiations broke down over other issues, and that’s about as far as I can go."

In her email to employees, Lehnertz said workers should know "that your efforts mean so much to so many."

"It is a difficult road at Grand Canyon — with challenges in recruitment and hiring, ever increasing visitation, and threats to park resources — all made more difficult in times of uncertainty," she said.

Evans said Lehnertz will not be doing any press interviews.

"She will not be talking … primarily because she’s exploring other options right now and she’s not sure how that might impact what she’s hoping to do in terms of the rest of her life," he said.