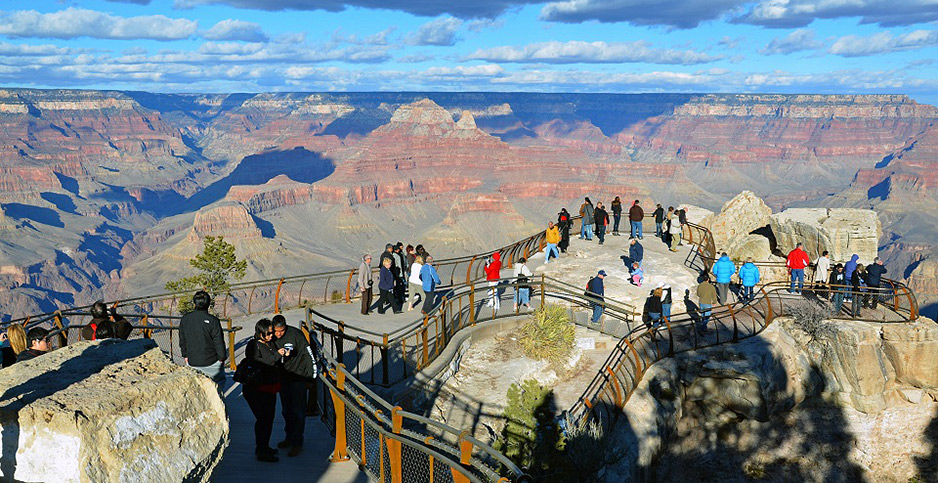 Officials at Grand Canyon National Park reported their first case of COVID-19 yesterday but said the popular tourist site in Arizona will remain open to visitors.

National Park Service officials said the infected person is a local resident of Grand Canyon Village who has been in self-isolation since March 25. The village is on the canyon’s South Rim.

"We have consulted with NPS Office of Public Health and have taken appropriate public health actions to minimize the risk of the virus spreading," Mary Risser, Grand Canyon’s acting superintendent, said in a message to employees.

No other details were released.

The case is sure to increase pressure on Interior Secretary David Bernhardt to close the park, one of the few major NPS sites that have stayed open during the pandemic.

"Large crowds are turning it into a health risk, and the Park Service must close it to protect public safety," Rep. Raúl Grijalva (D-Ariz.), the chairman of the House Natural Resources Committee, said on Twitter yesterday.

Another of the state’s congressmen, Democratic Rep. Tom O’Halleran, responded to the first positive case at Grand Canyon by posting a tweet this morning "urgently calling" on Bernhardt to close the park.

"We must act now to save lives," he said.

In a letter to Bernhardt today, Phil Francis, chairman of the Coalition to Protect America’s National Parks, said it is time to close all of the country’s national parks.

"It is frightening that you continue to allow and encourage park visitation," Francis wrote to Bernhardt. "Your inaction and failure to support the recommendations of experienced NPS managers and their local communities is putting NPS employees and local gateway community members at serious risk to exposure to the virus potentially carried by travelers from outside the local area. … It is only a matter of time before more NPS personnel become infected and test positive for the virus."

Arizona Republican Gov. Doug Ducey issued a stay-at-home order yesterday that will begin at 5 p.m. today and remain in effect until April 30. The order came as the number of COVID-19 cases in the state hit 1,157, including 20 deaths.

While Ducey’s order made no specific mention of Grand Canyon, the Coconino County Board of Supervisors asked the governor for help in pressuring Bernhardt to close the park.

"If Grand Canyon National Park is allowed to remain open, park employees, area residents and tourists are at risk," Elizabeth Archuleta, the board’s chairwoman, said in a letter to the governor.

Ducey has gotten involved with Grand Canyon before. During the partial federal government shutdown that began in December 2018, he insisted the park remain open, declaring that "regardless of what happens in Washington, the Grand Canyon will not close on our watch."

The National Park Service will not say how many of its 419 sites are closed, but many of them became overcrowded after Bernhardt suspended all entry fees two weeks ago (E&E News PM, March 18).

Since then, many of the major parks have closed, including Great Smoky Mountains, Yosemite, Yellowstone, Grand Teton, Rocky Mountain and Glacier. Many of them cited safety fears raised by state and local officials as reasons for shutting down.

In a related development, Del. Eleanor Holmes Norton (D-D.C.), said she sent a letter to acting NPS Director David Vela asking whether U.S. Park Police had been given enough protective gear to keep them safe during the pandemic. Norton sent Vela a similar letter on March 20, but her spokeswoman said Vela had failed to respond.

The National Park Service headquarters in Washington declined to comment and would not say how many of its more than 20,000 employees have tested positive for the coronavirus.