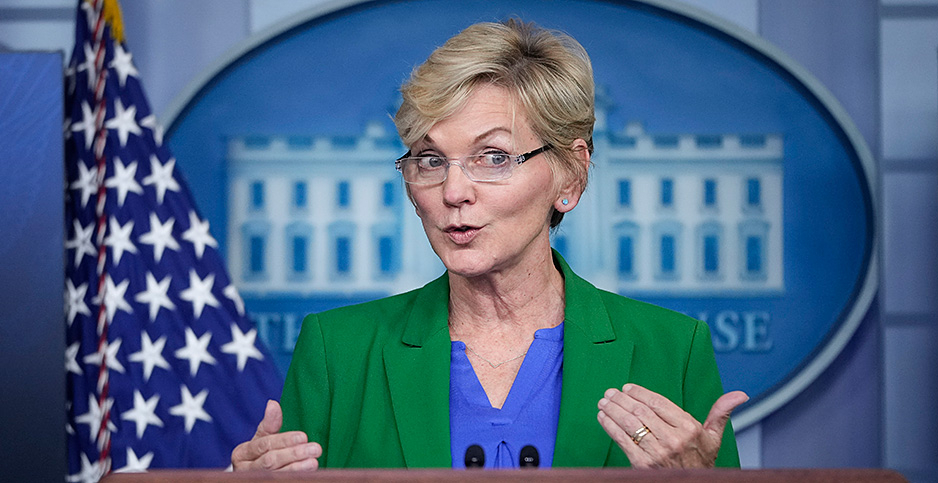 Secretary of Energy Jennifer Granholm briefs reporters on the cyberattack on the Colonial pipeline and the U.S. response during the daily press briefing at the White House today. Drew Angerer/Getty Images

Energy Secretary Jennifer Granholm today acknowledged a gasoline supply "crunch" in states served by the hacked Colonial pipeline but cautioned against hoarding, saying there is no gas shortage.

"We know that we have gasoline, we just have to get into the right places," Granholm said, adding that the next few days could be "challenging" in several Southern and mid-Atlantic states as the company labors to return the sprawling pipeline to service. But, she added, "it’s not that we have a gas shortage."

Granholm spoke earlier today with the governors of North Carolina and Virginia, the states with the highest number of retail gas station outages, a Department of Energy spokesman said.

She said she also spoke with the chief executive officer at Colonial Pipeline Co., who said the company expects to be able to decide on a full restart by the close of business tomorrow. The company shut down the entire 5,500-mile pipeline late Friday in the face of a ransomware attack.

The FBI said a criminal group known as DarkSide committed the cyberattack that locked up Colonial’s computer files.

But Granholm warned that it will still take several days to ramp up operations even after the decision is made, noting that it’s never been shut down before.

"It travels great distances, there is fuel in the pipes … so it will take a few days to be up and running," she said.

She said her team is continuing to touch base with the company and governors in the affected states, whom she noted are "understandably concerned" with reports of gas stations running out of fuel.

"They want it restarted as do we all," she said.

She noted the Department of Transportation has eased some requirements to make it easier to transport fuel, and its Federal Railroad Administration is working to enlist rail operators to transport fuel.

Granholm also noted that state and federal officials will be on the lookout for price gouging at gas stations and asked consumers to report exorbitant prices to state attorneys general.

"These states who are impacted, even with the turning on of the pipeline system, may still feel a supply crunch as Colonial fully resumes," she said, "but the American people should feel assured the administration is working with the company to get it resumed as soon as possible."