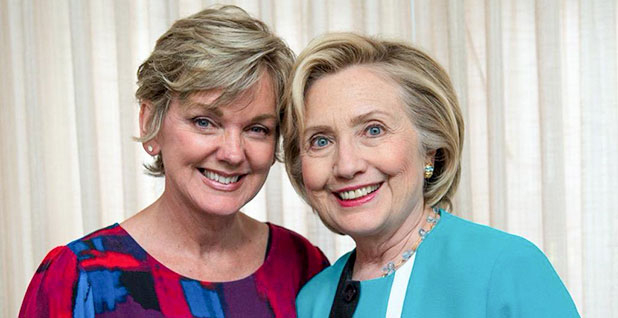 Former Michigan Gov. Jennifer Granholm (D), a critical adviser for the Clinton campaign on energy, jobs and infrastructure, stands with the Democratic presidential nominee. Granholm is rumored to be a top contender for a number of high-profile Cabinet posts should Clinton win the White House in November. Photo courtesy of @JenGranholm via Twitter.

Make it a competition, she said. And go around lawmakers.

"What if we decided to create a challenge to the governors of the country, and the price to entry into this competition [was] … you’d have to get 80 percent of your energy from clean sources by the year 2030?" Granholm told attendees at the TED2013 conference. "Why not ask all the states to do that instead?"

Granholm, now a top adviser in Democratic presidential nominee Hillary Clinton’s transition team and a rumored pick to lead the Energy Department if Clinton is elected, proposed a clean energy policy modeled after the Department of Education’s $4.35 billion Race to the Top. The competitive grant program, which Granholm called a powerful policy and a game changer, helped foster innovation and reforms in state and local K-12 education.

Transferring that concept to energy, Granholm posited, would trigger a rush of creative state climate solutions.

The politically potent swing states of Iowa and Ohio would step up to lead the nation in wind energy, she said. The "solar states" or Sun Belt could pump out electricity from solar panels, perhaps launching an industry cluster in California. Texas could provide the solutions for a smarter grid, while states in the Mid-Atlantic could take the helm of the biofuels market. Michigan, she suggested, could provide the guts for a burgeoning electric vehicle market.

And how to secure billions when lawmakers can’t even pass a budget? Go around them by putting private companies in charge, Granholm said. "You could wait and go through Congress, although you should be very impatient," she said. "Or, you renegades, you could go around Congress."

Today, the Canadian-born Granholm — and her proposal for boosting clean energy — are front and center in Clinton’s strategy heading into the November elections.

Clinton has pledged to launch a $60 billion Race to the Top-style program to spur clean energy innovation on the state level, one that Granholm has traveled the country explaining and touting as a Clinton surrogate and adviser on energy matters (E&E Daily, May 9).

"If you can’t get $60 billion from Congress to challenge the states," Granholm said in May at a Stanford University event on climate change, "you might have a private-sector challenge to Congress to be able to get to a number that is robust enough that would make the governors jump."

Could Granholm’s next stop, after burnishing her energy credentials, be the Department of Energy? Some stakeholders believe so but aren’t ruling out a possible appointment to serve as a Supreme Court justice, or a federal judge, or head of the Departments of Commerce, Labor, or Health and Human Services, or even as chairwoman of the Democratic National Committee.

Granholm is no stranger to the parlor game of guessing Cabinet spots. Her name has surfaced — and then quietly fizzled — when top positions opened in the Obama administration at DOE, U.S. EPA and the Supreme Court in recent years. But sources say this time could be different, noting Granholm’s early and avid support for Clinton, who she backed over Barack Obama in Michigan’s 2008 presidential primary.

"I do think a factor is [Granholm] just had a very strong relationship with Clinton; she didn’t have that with Obama," said Susan Demas, editor and publisher of Inside Michigan Politics. "She’s more of a known quantity to Clinton than she was to Obama."

‘Not just any woman’

Granholm in recent months has become a leading voice defending Clinton’s record on gender equality, the economy and energy.

While stumping for Clinton, the former governor shot back at Republican presidential nominee Donald Trump’s accusation that the Democrat is playing "the woman card."

"The Clinton campaign is saying, not just any woman, we wouldn’t say vote for Sarah Palin. … You want to vote for someone who shares your values," Granholm said during an interview on MSNBC in February. "So what she wants to convey is don’t vote for me solely because I’m a woman, vote for me because I am going to fight for you. … I would add 227 years [without a woman president] is long enough."

Clinton’s pledge to fill at least half her Cabinet positions with women could give Granholm an inside track for a top agency post. Only 30 women in the nation’s history have served in presidential Cabinets.

Should Granholm be tapped to lead DOE, she would be the second female energy chief. Hazel Reid O’Leary was appointed by President Bill Clinton in 1993 to lead the department, making her the first and only woman and African-American to lead the federal behemoth of 13,500 employees and 104,000 contractors.

Granholm’s role is also critical as the election heats up in the battleground state of Michigan.

Trump, who’s slated to give a speech in Detroit this weekend, is planning to target the traditionally blue state along with nine other states in an ad blitz that will focus on energy. "We’ll be talking about energy investments and infrastructure, and on the things that affect everyday people," Kellyanne Conway, Trump’s campaign manager, said yesterday on Bloomberg TV.

Clinton currently has a slight lead in Michigan. Emerson College released a poll yesterday showing Clinton with 45 percent of the vote compared to Trump’s 40 percent. The poll of 800 likely voters had a 3.4-point margin of error.

A focus on Michigan could mean a focus on Granholm’s legacy, one that saw her applauded for her work on clean energy but plagued by tricky politics, the collapse of the state’s automobile industry and lingering effects of the 2008 recession.

When Granholm was elected governor of Michigan in 2002, she turned to clean energy as a centerpiece in her efforts to resuscitate the state economy. During an interview with the magazine Bioenergy Connection in 2014, Granholm explained how she pushed the state’s utilities to buy into renewable energy standards and imposed a business model that rewarded them for energy efficiency. In 2007, she would sign into a law a 10 percent renewable portfolio standard.

Yet Granholm said her biggest challenge was a Legislature opposed to the renewable energy standards.

"It should have been higher, but that’s what we were able to get," Granholm said of the RPS during an interview with the magazine, a joint publication from her alma mater, the University of California, Berkeley. "Then we adopted a huge suite of tax credits and tax incentives for various types of industries, from biomass to wind and solar."

Stanley "Skip" Pruss, Granholm’s former special adviser on renewable energy, pointed to dozens of clean energy initiatives Granholm shepherded through the state, while acknowledging that she faced tremendous headwinds. "One hundred percent on effort, 60 percent on success, but, yeah, there were things that she tried to do where we weren’t successful or she was too early," Pruss said. "Or she just got caught in the downturn in Michigan, which was so profound."

Today, Michigan obtains the bulk of its electricity from coal-, nuclear- and gas-fired power plants, according to the U.S. Energy Information Administration.

Like Obama, Granholm used executive power to get things done when the legislative process ground to a halt. In 2009, for example, she used an executive order to consolidate energy and environmental agencies in Michigan and appoint a leader for the state’s new Department of Natural Resources and Environment. "She was one, like Obama, but did it as governor in those years, to really use executive orders to do as much as she possibly could when you have a uncooperative, intransigent Legislature," Pruss said. "She was cutting executive orders to push policy when the Legislature wouldn’t."

Even so, Demas said it was an impossible task to turn the state’s economy around in a couple of years.

"I think the issue has become rather partisan, so the way you view it reflects your political perspective," Demas said. "Democrats tend to think she was pretty successful, Republicans don’t. But if you’re looking at it from economics, there’s been diversification, increase in green jobs. But it’s not like it’s taken over as the biggest sector" in Michigan.