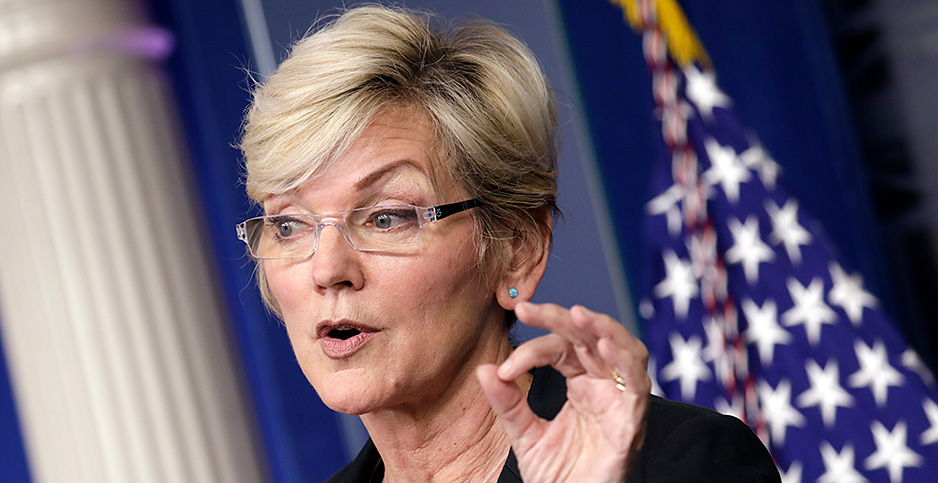 Energy Secretary Jennifer Granholm said yesterday that the Biden administration is committed to delivering a clean energy standard to boost carbon-free energy, suggesting there’s a way Congress could pass one without Republican support.

"So much of it depends on how it is crafted," Granholm told a Bloomberg New Energy Finance energy conference. She said it "remains to be seen" whether the clean energy standard — a centerpiece of Biden’s climate agenda — could be passed through the Senate by regular order with 60 votes, or through the Senate’s reconciliation process, which requires just 51.

But she said she believes there are "versions" of it that would "work for Senate reconciliation rules," which would enable passage along party lines. The decision would be up to the Senate parliamentarian, who interprets the chamber’s rules.

Biden has called for a clean energy standard — which would prod utilities to use cleaner electricity — in his $2 trillion infrastructure plan. His initial fiscal 2022 budget request released last week also calls for $1.9 billion for the Department of Energy to start work to achieve a carbon-free grid by 2035, including through support for a CES.

Several environmental groups have pushed the administration to pass a standard through budget reconciliation and welcomed Granholm’s remarks.

Granholm made it clear that talks with Congress continue, adding that there’s also "a way to consider crafting something that provides incentives to the states to be able to make [a clean energy standard] happen."

She didn’t provide details but suggested that incentives could be similar to the Obama-era Race to the Top program, in which the federal government offered competitive grants for schools to improve education standards.

Granholm said no decisions have yet been made, but added, "I think they’re open to figuring out ways to make it work for both the pockets of this country that might have concerns about a CES and the pockets that have already led by example and can still bump it up a notch."

The details of a standard could put the administration at odds with segments of the utility sector that have not embraced a nationwide framework, or have questioned the viability of reaching 100% clean power by 2035.

It’s also unclear how receptive Congress will be. Analysts at investment bank Raymond James wrote in a research note earlier this month that they were "skeptical" that moderate Democrats, particularly Sen. Joe Manchin (D-W.Va.), would back phasing out fossil fuels.

Will there be jobs?

In other remarks at the summit, Granholm pledged that the administration would link clean energy to working conditions and fair wages, targeting one of the Biden administration’s biggest challenges in its efforts to tackle climate change.

Granholm and Biden have promised that the transition to green energy will create millions of "good-paying union jobs," even as Republicans warn that better-paying jobs are on the line.

"The president is committed to connecting clean energy incentives to labor standards, to make sure the energy sector does a better job," Granholm said. "I think we all want to see this sector not be considered a sector that is not desirable for people to move into."

Union representation and wages in the wind and solar power industries have tended to lag behind those in oil, gas and coal.

Granholm noted the importance of addressing communities and workers who have depended on coal and fossil fuel jobs, suggesting they cannot only be told, "Hey, you can transition over to this particular sector, but you will be making about half of what you were making before."

"There’s a balance in there, and we think we can achieve it as a nation," she said. "We think energy can be good-paying for the people who are working in it, and that the rates are affordable and the U.S. government is willing to put a lot of money upfront reducing some of the capital costs so we can make it affordable."

Her remarks came after former New York City Mayor Mike Bloomberg on a separate panel noted that as many coal-fired plants closed under Trump as under Obama, and that he hoped the rate would "expand under Biden."

He noted that Bloomberg Philanthropies has pledged funds for retraining workers in other industries.

Granholm also suggested that the administration, which in Biden’s infrastructure plan calls for a 10-year extension of the tax credit for clean energy generation and storage, is open to a separate tax credit just for batteries.

Asked by a moderator about the fact that energy storage can currently only receive a tax credit if it’s aligned with renewables, Granholm said the administration is "supportive of tax credits for battery technology, whether it’s attached, whether its utility-scale, you name it."

She added, "We want to see battery technology developed and deployed."