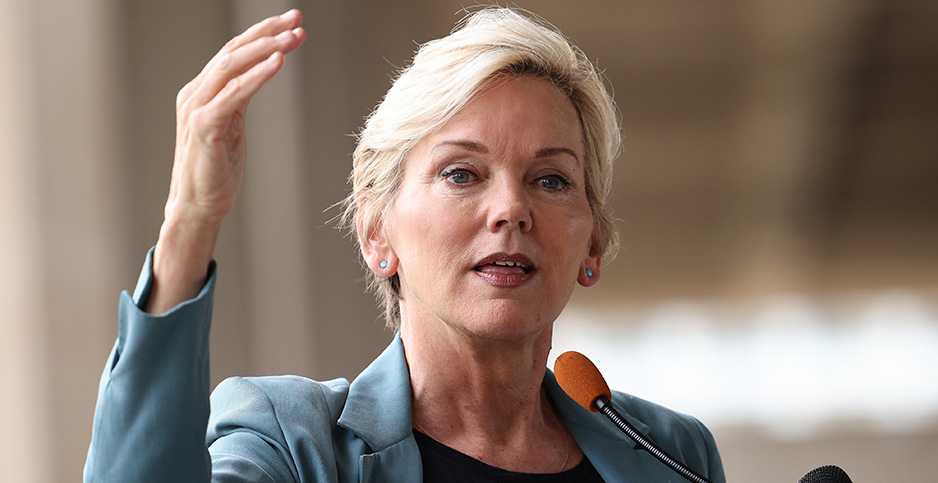 Energy Secretary Jennifer Granholm is pictured at a June 2 event honoring Pride Month in Washington. She said yesterday that a clean energy standard is still a Biden administration priority in negotiations with Congress. Kevin Dietsch/Getty Images

Energy Secretary Jennifer Granholm said yesterday that President Biden continues to advocate for including a clean electricity standard in an upcoming infrastructure bill, despite reports that the policy might not make it into the final plan.

The policy’s status came into question this week after White House climate adviser Gina McCarthy told POLITICO that some of the administration’s climate plans, including the standard, could be left out of an infrastructure package.

Granholm rebuffed those reports yesterday, saying that any comments suggesting that the policy was no longer on the table were taken "out of context."

"That is not the state of play," Granholm said, speaking at an event in the Las Vegas area to promote the infrastructure plan. "The president will be pushing for a [standard]. There’s a Senate bill that is a vehicle for it, and I know the House has bills they’re using as a vehicle."

"Everyone wants to see it happen, because it’s the demand-side strategy for creating the supply of clean energy," the secretary said.

Granholm’s remarks came during a press conference at the end of a forum on clean energy jobs and social justice issues with local and state leaders in Las Vegas. Participants in the forum, hosted by Rep. Steven Horsford (D-Nev.), included Nevada Gov. Steve Sisolak (D), state lawmakers and Ronnie Young, a political director and organizer at the International Brotherhood of Electrical Workers Local 357.

The administration has been talking with lawmakers on the contours of an infrastructure package, although President Biden dropped negotiations with Senate Environment and Public Works ranking member Shelley Moore Capito (R-W.Va.) this week, and some progressives have signaled that climate issues must be a central component of the bill.

Senate leaders say using the process of budget reconciliation to avoid a Republican filibuster remains on the table for approving the president’s proposals, and many Democrats want Biden to stop negotiating with the GOP altogether (E&E Daily, June 10).

Horsford said, "The bottom line is we need to get this done for the American people. This is about jobs that need to be created now and into the future that are going to help us recover from this pandemic and the disproportionate impact it’s had on women and people of color."

Granholm’s trip to Nevada came on the heels of the passage of a sweeping clean energy plan in the state that Sisolak signed into law yesterday morning. S.B. 448 will boost investments in electric vehicle infrastructure, promote energy efficiency, expand an existing energy storage program and require the state’s main utility to file a transmission infrastructure plan, among other components.

"Nevada is really, as a laboratory of democracy as the states are, showing the federal government what we can do at the federal level," Granholm said.

Following the cancellation of the controversial Yucca Mountain nuclear waste disposal site, DOE is currently carrying out an Obama-era panel’s recommendations on how to manage the country’s nuclear waste problem, Granholm said. The recommendations had suggested identifying communities willing to take the waste, something DOE is looking into now, she noted. Such a process could start in the fall, she added.

"Hopefully, we’ll be able to take this on in a way that respects the communities and compensates them for it," Granholm said.

More than 80,000 metric tons of spent nuclear fuel has piled up across the country because the federal government has been unable to find a permanent disposal site. Although the Obama administration canceled the Yucca project in 2010, the Trump administration briefly attempted to resurrect it.

On mining, Granholm noted that Nevada is rich in critical minerals that are needed to build electric vehicles and batteries for the energy transition. Recent efforts to mine lithium in the Silver State, however, have faced opposition from some environmentalists and community activists, particularly in the case of the proposed Thacker Pass project.

The president is committed to mining metals in a way that is environmentally sustainable, Granholm said. Producing more of these materials domestically is a priority for the administration, which wants to reduce dependence on Asian countries for solar parts, she said.

Interior Secretary Deb Haaland is currently surveying the country’s public lands to determine "which lands are going to be best positioned" to develop renewable energy and for mining, Granholm said.