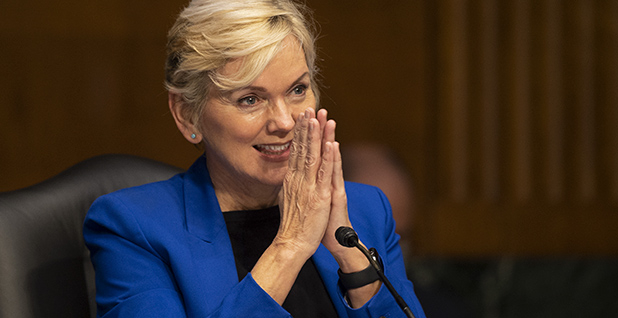 In her first week on the job, Jennifer Granholm pitched a skeptical oil and gas crowd on President Biden’s bid to cut carbon emissions, said she’d welcome Texas to join the wider power grid, professed her love for electric vehicles on national television and marveled over research being conducted at her Department of Energy labs.

The Energy secretary will play a leading role in the Biden administration’s effort to deliver a carbon pollution-free power sector by 2035, and Granholm moved quickly to establish herself as an enthusiastic advocate of innovative ways to tamp down emissions.

"What are we here for, if not to give people opportunity and save the planet?" she asked Wednesday during her appearance at CERAWeek by IHS Markit, a virtual conference for oil and gas executives.

Granholm, a former Democratic Michigan governor who embraced electric vehicles as a way of helping her state pull out of a recession, told E&E News that DOE will work to ensure the clean energy transition won’t leave workers in legacy energy fields behind.

But keeping DOE fully staffed was a struggle for her predecessors and Congress, which has supported the agency and added ambitious new initiatives to its to-do list. The mammoth department distributes billions of dollars in grants, conducts research on energy efficiency and renewables, and oversees the nation’s nuclear stockpile and 17 national laboratories.

In an interview Friday, Granholm discussed the need for new transmission lines, the Biden administration’s views on liquefied natural gas and why she’s "bullish" on carbon capture technology, among other topics.

Will DOE prioritize investments for carbon capture for natural gas over coal? Does it still plan on exploring "new market opportunities for coal," as the Trump administration did?

NETL [the National Energy Technology Laboratory in Pennsylvania] is doing a lot of research on coal, coal substitutes and the use of coal for other purposes. We’re really interested in carbon capture, use and sequestration [CCUS] on all fossil fuels.

The Intergovernmental Panel on Climate Change has said that you can’t get to net-zero carbon emissions without carbon capture, utilization and storage (CCUS). We are excited about that. Obviously, it’s still nascent technology in capturing CO2 emissions, but we’ve got to do it on all types of fuel, if we’re going to get to net zero.

I’m really excited about it, especially for communities in transition. You think of Appalachia, for example: They have coal; they have natural gas. Those workers, if they’re interested, could shift skills to be able to do installation of this technology. The CO2 pipelines that will be necessary for it could put lots of people to work, so I think it’s a big job opportunity, I think it’s a big carbon reduction opportunity, and we’re going to be bullish about it.

How will you be able to accomplish all that you’ve set out to do with divisions such as the Office of Energy Efficiency and Renewable Energy that over the past four years have been "very shrunk back," as deputy Energy secretary nominee David Turk testified at a hearing?

We’re prioritizing both the hiring and plusing up of these divisions and offices in DOE that are going to be carrying out this really important work that we are embarking upon, which is to create jobs and deploy, deploy, deploy.

Buildings and energy efficiency is super important. We’ve got a great person who is leading that right now, Assistant Secretary Kelly Speakes-Backman, and someone over at the office of energy and science who was in charge of that effort [during the Trump and Obama administrations], Kathleen Hogan.

It is very exciting the number of resumes and the interest that we are looking at, which is super important for getting to work.

One of the biggest problems with transmission of energy has been the siting and permitting of interstate power lines. DOE has some power that it has been reluctant to use under the 2005 Energy Policy Act. Do you envision using it, and are you willing to go as far as eminent domain proceedings to get transmission going?

The question is, what is the best way to be able to get a cooperative process, but a speedy process, to make that happen? We’re in conversations about what the strategy will be. I hope that a component of this is going to be in the jobs plan, which will follow the COVID [relief] package that is going through Congress right now. So stay tuned on that, but we know that it’s a foundational issue for getting the amount of deployment we need, and so there are a lot of really great people who are thinking through ways to make this happen and especially using federal rights of way, federal lands.

There are other ways to skin the cat, including incentives to make it happen, so stay tuned.

An emerging threat in this sector is cybersecurity. With the SolarWinds hack that came to light recently, there were some news reports that the National Nuclear Security Administration was affected, and DOE was targeted. Are you confident in DOE’s ability to meet this cybersecurity challenge? Do you envision keeping the Trump administration-created Office of Cybersecurity, Energy Security and Emergency Response (CESER) running?

Yes, CESER will continue to run. We are going to make sure it has the staff necessary to ensure that we at DOE and NNSA are safe, but most importantly, that the grid is safe.

We have been working with our utility partners on this [SolarWinds breach]. It is a full-on effort with all players that have been affected. Clearly, this was a private-sector hack, essentially. [Attempted] hacks continue at an unabated pace, and we have to make sure we have the right protections around the grid and certainly around our national security efforts to make sure we are not at risk. CESER will be robust, and it will keep in commission to ensure that the grid is safe.

On LNG, the Obama administration kind of got it started. Trump-era Energy Secretary Rick Perry embraced it as "freedom gas." But some have suggested that the Biden administration has not tipped its hand on LNG. How do you see it?

Obviously, we have obligations under the Natural Gas Act to permit these facilities. In permitting these facilities, they go often to exports to countries that would otherwise be using very carbon-intensive fuels. And so it does have the impact of reducing internationally carbon emissions.

However, I will say there is an opportunity here, as well, to really start to deploy some CCUS technologies with respect to natural gas in the Gulf and other places that we are siting these facilities for that we are obligated to do under the law. I think there is a jobs opportunity, a continuous carbon reduction opportunity in the LNG field.

The other piece that I think we have got to as a country really focus on is methane — flaring and leaking.

Where do you envision taking your first official visit outside of Washington, D.C.?

Oh golly, what a great question! I know I want to visit all 17 labs, but I don’t know where the first visit will be once COVID is lifted. But I do intend to visit these facilities.

Today [March 5] is Employee Appreciation Day, and I have to say I’m on day six of my tenure, and in this first week, I have been just simply in awe of the talent and the depth of knowledge and the incredible work ethic of the DOE. It is an amazing organization, so I hope I will be able to visit these facilities that are a little far-flung from Washington, D.C., so I can see them in person.