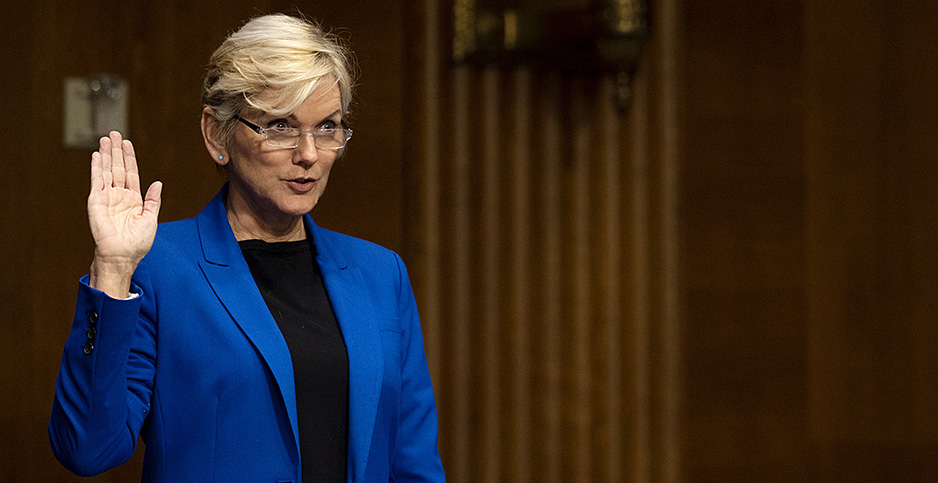 The former Michigan governor made the case this morning that her "obsession" with job creation qualifies her to lead the new administration’s clean energy employment goals, an effort with the potential to create more energy jobs than existed before.

"I believe that I was nominated by President Biden because I am obsessed with creating good-paying jobs in America," Granholm said.

Her appearance before the Senate Energy and Natural Resources Committee came as skeptical Senate Republicans attempted to fault her for previous comments she made against the fossil fuel industry and White House executive actions.

In an opening statement focused on guiding the auto industry and diversifying Michigan’s economy amid the 2008 financial crisis, Granholm presented the opportunity of an economic boom related to electric vehicles and other clean energy technologies.

Granholm said the Biden administration’s goal is to create 10 million clean energy jobs across a host of technology and manufacturing sectors.

Sen. Bernie Sanders (I-Vt.) said, "That is extraordinary, and while there will clearly be, while we make the transformation, loss of some jobs, no question about it — correct me if I’m wrong, 10 million jobs is a hell of a lot more jobs being created than lost."

Granholm said her approach would focus on ensuring clean energy jobs in places that have suffered the most from the transition.

A key tool, she said, would be tax credits and Energy Department spending in those areas. Specifically, she endorsed with a "1,000%, yes" an effort by Chairman Joe Manchin (D-W.Va.) to beef up the so-called 48C tax credit to incentivize clean energy manufacturing in states like his.

"I bring to this role the sincere belief that we, in America, cannot leave our people behind," Granholm told the committee.

That commitment, along with a broader acknowledgement that she understands that fossil fuels will continue to be of use — albeit with emissions reduction technology — will likely pave her way to confirmation.

"We are very fortunate to have such a well-qualified and talented nominee for the important position of secretary of Energy," Manchin said. "I wholeheartedly support her nomination."

Still, Senate Republicans spent the better part of their time questioning Granholm on the economic fallout from the Biden administration’s climate goals.

"I think there is a question before the American people: Does the Biden administration actually care about their jobs?" said Sen. Bill Cassidy (R-La.).

"You mentioned that the Biden team will have a SWAT team to make sure folks are employed," Cassidy added. "I’m thinking it’s a SWAT team to take out their jobs."

Republicans have seized on the White House’s early actions, including the cancellation of the Keystone XL pipeline and the freezing of new oil and gas leases on federal lands, as harmful to employment and U.S. energy independence.

Granholm defended those actions, especially in relation to the lease freeze. She noted that existing leases would continue, with plenty of them going unused.

"I believe, if we are going to get to net-zero emissions by 2050, [we] can’t do without coal and oil as a part of the mix, but not without [carbon capture and sequestration] — carbon management researched at DOE. We must use those tech to clean up and to remain energy independent," Granholm said.

‘Knife to a gunfight’

After the hearing, Montana Republican Sen. Steve Daines told reporters about Granholm: "She’ll bring a commonsense view to energy that’s been decimated right now." He added, "I hope she’ll be a voice of reason."

Sen. John Barrasso of Wyoming, the committee’s new top Republican, attempted to ding Granholm for alleged misuse of state money for investment in A123 Systems, a battery technology business that was eventually sold to a Chinese company and failed to produce new jobs in Michigan despite the state investment.

Granholm denied any wrongdoing and criticized the report as false, noting that the tax credit incentives have protections that only guaranteed their use once jobs were created.

"We better believe that China is in this and they are aggressively competing," Granholm said. "States individually are bringing a knife to a gunfight, and without a federal partner to make sure we can get these jobs in America, then we will be losing globally."