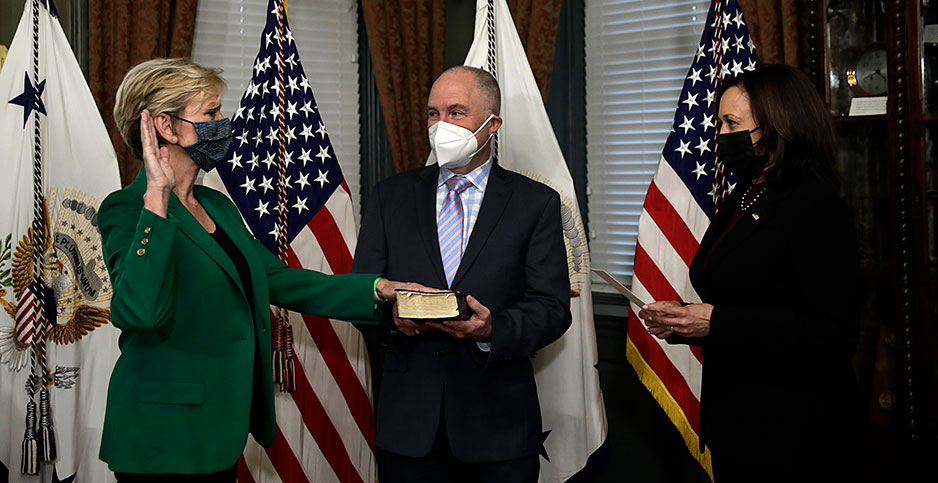 Secretary of Energy Jennifer Granholm (left) was sworn in alongside her husband, Dan Mulhern, by Vice President Kamala Harris during a ceremony in the Eisenhower Executive Office Building at the White House yesterday. Yuri Gripas/Pool/Sipa USA/Newscom

Jennifer Granholm was sworn in as the nation’s 16th secretary of Energy last night, giving her a pivotal role in President Biden’s aggressive plans to decarbonize the power sector, even as she is likely to be constrained by the limited powers of the massive agency.

Granholm, a former two-term Michigan governor who embraced clean energy as a way of reviving her Rust Belt state during a staggering recession, took office after being confirmed 64-35 in the Senate yesterday afternoon.

Granholm will be only the second woman to head the Energy Department, and in a video and blog post after the swearing-in, she pledged that DOE will be a central player in Biden’s bid to tackle climate change by putting into "hyperdrive" its efforts to boost alternative energy.

"President Biden has tasked the department, his in-house solutions powerhouse, with delivering a cornerstone of his bold plan: the goal of achieving net-zero carbon emissions by 2050," she wrote. "For DOE, that means developing and deploying the technologies that will deliver a clean energy revolution."

She marked her first hours in office with an interview with MSNBC, telling the network that it’s not politics that is driving clean energy, but the market.

"These companies and countries across the globe are deciding it’s too much to see a planet that has so many horrible climate events," she said. DOE is the "solutions place," where the national laboratories work on solutions to decarbonize fossil fuels, she said.

"She’s a trailblazer," said Nidhi Thakar, strategy director at Portland General Electric, Oregon’s largest utility. "She’s made it clear that her vision for the department, in addition to securing national security and supporting science at our national labs, is to advance American manufacturing and innovation to help battle against climate change and to support good-paying American jobs."

Yet it is the scope of the department that poses the biggest test.

In addition to overseeing the department’s 17 national labs, a nuclear arsenal and Cold War-era cleanup sites, the secretary oversees a multibillion-dollar loan guarantee program that proved a lightning rod under the last Democratic president, along with various offices focused on fossil fuels, renewables, energy efficiency, research into battery storage, and efforts to both modernize and protect the electricity grid.

"Her biggest challenges will be the same two challenges that everyone who runs DOE encounters: trying to manage the labs and trying not to let the actual function of the department — making and cleaning up from the making of nuclear weapons — absorb all of her time and attention," said Michael McKenna, a former Trump energy adviser who briefly led the president’s transition team at DOE.

Spencer Abraham, a former Republican senator from Michigan who led DOE under former President George W. Bush, said he expects Granholm, who was Michigan attorney general when he was in the Senate, to be a "strong leader and strong advocate" for Biden’s energy plans.

Abraham said he and Granholm have already discussed the rigors of the job. "We’ve talked about the fact DOE was cobbled together from lots of different places or agencies and brought under one roof, and almost every day, you’ve got a new area that you’ve got to focus on," said Abraham. "That’s a challenge for anyone who takes the job."

Abraham added that the week he took office in 2001, there were rolling blackouts in California. "We were in a crisis from day one, and in some ways, she will face that challenge with Texas," he said of the winter weather outages that left millions without power. "You may go in with your focus on a particular issue, but something like that happens, and it shifts attention."

Though most of Texas is not on the national electricity grid, the secretary is likely to work with DOE’s Office of Electricity and other energy offices on steps the federal government can take to increase the resilience of the grid, said Jeff Navin, who served both as DOE’s deputy chief of staff and as chief of staff during the Obama administration.

"One thing is certain: America’s electricity grid is simply not able to handle extreme weather events," she said in a tweet. "Whether it’s wildfires in California or snowstorms in Texas, we need to upgrade our grid infrastructure ASAP."

Granholm will have no shortage of tasks to undertake upon her arrival, but Congress has already provided a road map for mandates it wants to see done on clean energy technology research and development.

Lawmakers in a pandemic relief package last December included the first major update to the nation’s energy policies in over a decade. The package directed the agency to produce a host of reports and clean energy demonstration projects across DOE research areas.

The energy bill requires demonstration projects across more than a dozen technologies, including two advanced nuclear reactors and four energy storage projects that demonstrate grid-scale storage over longer durations, among others.

Granholm has already committed to following through on congressionally mandated reports on critical mineral supplies during her confirmation hearing. She said she was "enthusiastically supportive" of DOE’s role in critical minerals "for both jobs and energy security and supply chain security in the United States."

The energy legislation also called for enhanced work on grid infrastructure research and development. The grid improvement is likely to include an increased focus on the grid’s resilience to extreme weather that causes prolonged blackouts like those in Texas and California in recent months.

And the Biden administration has its own goals: hiring its first-ever deputy director for energy justice to help underserved communities secure clean energy. It has also put the department on a federal task force examining how to help communities whose economies are dependent on coal, oil and gas, and power plants.

Environmentalists welcomed Granholm’s arrival, saying that her recent comments and record in Michigan indicate she would be an effective champion for Biden’s clean energy priorities.

"There is so much anxiety expressed by members of Congress that somehow this administration doesn’t care about the jobs in the energy sector, and one of the things she’s done particularly well is to articulate the fact that with the right investments and the right policy, America could be taking the lead in the clean energy revolution and creating millions of new jobs," said Elgie Holstein, a senior director with the Environmental Defense Fund and former chief of staff at DOE.

"Having a former governor who has been on front lines of labor issues related to transportation is great timing. It’s not academic for her; it’s not theoretical for her," Holstein added.

Thakar, the Oregon utility company official, served as a former senior adviser in DOE’s loan program and noted that the agency has more than $40 billion in existing loan authority that Granholm is likely to tap.

"It’s a real opportunity for DOE, and it’s an area where she has experience," Thakar said.

Granholm tweeted yesterday that she was "impatient for results" and "obsessed with creating good-paying clean energy jobs in all corners of America in service of addressing our climate crisis."

As governor, she championed tax incentives and state grants as a way of creating jobs and boosting sustainable energy innovation. She became such an evangelist for the program that she delivered a speech resembling a TED Talk at DOE headquarters in 2013, pitching a program to encourage states to compete for clean energy grants.

DOE’s loan program has drawn Republican critics, partly because of support during the Obama administration for Solyndra, a solar company that later went bankrupt. Supporters of the program maintain that it has had a successful track record (Energywire, Jan. 26).

The Michigan-based Mackinac Center for Public Policy, a free-market think tank, contends that most of the projects Granholm pursued in Michigan failed to deliver on the promises of creating jobs.

"She hiked a variety of taxes … and then gave a whole bunch of select incentives and credits to just a few companies, and those tended to be in areas that she liked, including green energy," said Jarrett Skorup, the center’s marketing and communications director.

Granholm defended her record at her confirmation hearing after Wyoming Sen. John Barrasso, the top Republican on the Senate Energy and Natural Resources Committee, asked her to explain why taxpayers should trust that she would "invest U.S. taxpayer dollars wisely."

"I hope that we don’t look at some failures along the way as a reason not to invest in technologies that banks are not going to invest in because they haven’t been deployed yet," Granholm said.

Susan Demas, a longtime Michigan political observer and editor-in-chief of the news site Michigan Advance, noted that Michigan still has a robust green energy sector, "and worldwide, people have come to the conclusion that we need alternate forms of energy as soon as possible. She was pretty forward-looking."

Demas added that Granholm — the first woman to serve as governor in Michigan — for much of her tenure worked with a Republican Senate, undergoing two government shutdowns.

"The decade that she was governor was such a negative time for Michigan; I think she is perhaps remembered more fondly outside of Michigan," Demas said. "Nobody has forgotten how bad the recession was, but in terms of her policies, her approach with green manufacturing has been proven to be a smart bet."