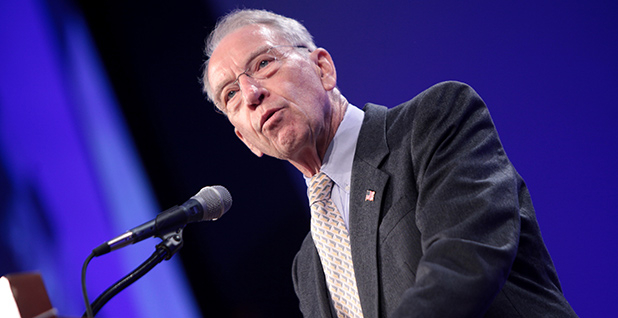 Sen. Chuck Grassley (R-Iowa) joined with Democrats in slamming a Trump administration opinion that it has no legal obligation to respond to many congressional inquiries. Gage Skidmomre/Flickr

The chairman of the Senate Judiciary Committee is joining Democrats in harshly denouncing a recent Trump administration legal opinion that takes a narrow view of federal agencies’ obligations to respond to congressional information requests.

Sen. Chuck Grassley (R-Iowa) did not mince words in a letter to President Trump this week, dismissing as "nonsense" DOJ’s conclusion that the executive branch’s constitutional duty to respond to information requests is largely limited to committee chairs (Greenwire, June 2).

It noted that the Supreme Court has "recognized time and again that the power of congressional inquiry is inherent" in its constitutional legislative authority.

"That is because without access to information held by the Executive Branch, Congress cannot legislate effectively or help assure the American people that their hard-earned tax dollars are being spent wisely," Grassley wrote.

Despite the OLC’s conclusion that constitutional powers reside with committee chairs, Grassley argued that "every member of Congress is a Constitutional officer, duly elected to represent and cast votes in the interests of their constituents."

"Thus, all members need accurate information from the Executive Branch in order to carry out their Constitutional function to make informed decisions on all sorts of legislative issues covering a vast array of complex matters across our massive federal government."

Democrats have also lambasted the OLC opinion, which minority members on the House Oversight and Government Reform Committee this week said runs contrary to a 1928 statute that allows any seven members of that panel to request information from federal agencies (E&E Daily, June 7).