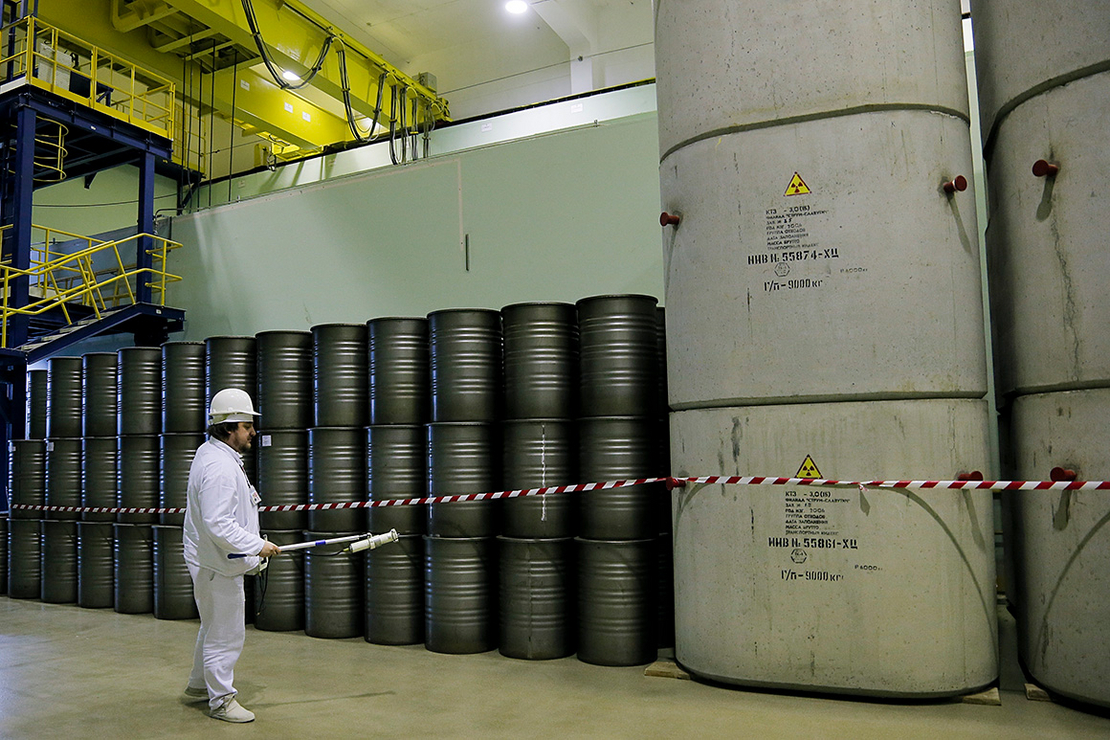 In this March 23, 2016, photo, a worker checks the radiation level on barrels in a storage of nuclear waste taken from the fourth unit destroyed by the 1986 explosion at the Chernobyl nuclear power plant in Ukraine. AP Photo/Efrem Lukatsky, File

International nuclear monitors warned yesterday that Russia’s invasion of Ukraine could put Europe’s second-largest nuclear fleet at risk, even though initial fears of a new widespread contamination threat at the crippled Chernobyl plant appear to be unfounded.

International Atomic Energy Agency Director General Rafael Mariano Grossi said in a statement that he’s following the unfolding situation in Ukraine with “grave concern” and called for “maximum restraint” to avoid any action that would put the nation’s 15 reactors at risk.

“It is of vital importance that the safe and secure operations of the nuclear facilities in that zone should not be affected or disrupted in any way,” Grossi said in the statement. “The IAEA is closely monitoring developments in Ukraine with a special focus on the safety and security of its nuclear power plants.”

James Acton, director of the Nuclear Policy Program at the Carnegie Endowment for International Peace, also warned in a blog post that “even if Moscow doesn’t authorize direct attacks against nuclear plants, such attacks might occur anyway. A weapon aimed at a nearby target could hit a nuclear power plant if its navigation system failed.”

Grossi’s concerns were expressed after Russian soldiers seized the Chernobyl plant after what officials called a fierce battle with Ukrainian forces in the protected area surrounding the site near the city of Pripyat. In 1986, an explosion at one of Chernobyl’s reactors spewed radioactive clouds far into Western Europe.

After the invasion, Ukraine officials informed the IAEA that there had been no casualties nor destruction at the plant, the IAEA said in a statement from its Vienna headquarters. Chernobyl is enclosed by a massive, $1.9 billion steel structure to contain still-dangerous levels of fuel and radioactive debris.

Early in yesterday’s Russian assault, Ukraine President Volodymyr Zelenskyy warned that Russian forces were trying to seize the Chernobyl facility and raised the specter of a dangerous new release. According to the Associated Press, Zelenskyy said on Twitter that “our defenders are giving their lives so that the tragedy of 1986 will not be repeated.” He added that “this is a declaration of war against the whole of Europe.”

Normally, the site would be full of workers and engineers continuing the decommissioning of the devastated reactors. A spokesperson for the State Agency of Ukraine on Exclusion Zone Management, Yevgeniya Kuznetsovа, told CNN, “When I came to the office today in the morning [in Kyiv], it turned out that the [Chernobyl nuclear power plant] management had left. So there was no one to give instructions or defend,” she said.

However, Alyona Shevtsova, adviser to the commander of Ukraine’s Ground Forces, said on Facebook that staff are being “held hostage,” CNN reported this morning.

White House press secretary Jen Psaki said yesterday, “We are outraged by credible reports that Russian soldiers are currently holding the staff of the Chernobyl facilities hostage. This unlawful and dangerous hostage-taking, which could upend the routine civil service efforts required to maintain and protect the nuclear waste facilities, is obviously incredibly alarming.”

“From a biological, nuclear safety point of view, this is a fairly benign site at this point,” said Lake Barrett, who served as acting deputy director of the Department of Energy’s Office of Civilian Radioactive Waste Management from 1993 to 2002. “Yes, it’s highly contaminated, and yes, it should be contained,” he continued, “but there’s no active energy there that can cause an explosion or cause a plume of any biological significance.”

Yet Kate Brown, a Massachusetts Institute of Technology professor who has written about the Chernobyl accident, said she fears that fighting at the reactor site could start fires that could carry smoke-borne radioactivity.

“It’s called an exclusion zone for a reason,” Brown said. The steel containment structure, the length of nearly three football fields, was needed to control leaking radioactivity, she said: “The last thing you want is a missile hitting that.”

Similarly, Acton at the Carnegie Endowment for International Peace wrote that the bigger nuclear risk involves potential fighting around Ukraine’s four active plants. Unlike Chernobyl, those plants are not isolated, and the invasion could create safety issues such as preventing workers from traveling to reactors to allow them to operate safely or causing power outages that affect the ability to cool reactors.

“To put it simply, nuclear power plants are not designed for war zones,” Acton wrote.

At Chernobyl, it remains unclear whether military action was at the reactor site or elsewhere in the roughly 1,000-square-mile protected zone. The site is on the route from Belarus to Kyiv.

“As far as the facility itself, you could shoot an anti-tank rocket or high explosives into the building and blow a hole into the building,” Barrett said. “It’s just steel. It’s not an armored building. It’s a sheet metal building on a frame.”

A greater risk would have been explosions from artillery impacting soil around the site contaminated with radioactive cesium, which could then become airborne as dust, Barrett said.

Barrett noted that Chernobyl is 10 miles from the border with Belarus, an ally of Russia, and that much of the contamination — outside the containment zone — is in Belarus and Russia itself, so any tampering with the plant would spread contamination into those areas.

“That doesn’t make any sense if they were going to do something detrimental at the Chernobyl site; the contamination is going to go into Belarus long before it goes anywhere else,” Barrett said.