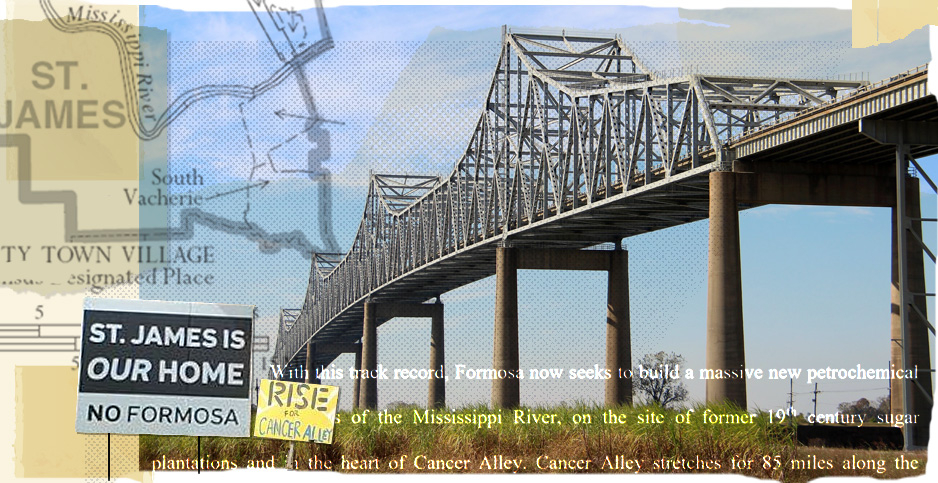 As the nation mourned the deaths of George Floyd, Breonna Taylor and other Black individuals at the hands of the police this summer, a massive petrochemicals complex planned for St. James Parish, La., became an environmental justice battleground in a community that is already reeling from pollutants spewed by industrial plants in the region — and from the respiratory disease caused by the novel coronavirus. Claudine Hellmuth/E&E News(illustration); cmh2315fl/Flickr(bridge); U.S. Census/Wikipedia(map); Sharon Lavigne(signs); Court documents(text)

A lifelong resident of St. James Parish, Sharon Lavigne spent her childhood playing in and exploring the fields that surrounded her home.

The Louisiana community was rich in flora and fauna — foxes, rabbits and deer made frequent appearances — and contained enough fish, shrimp and fertile soil for her family to catch and grow their own food.

These days, Lavigne’s yard is filled not with wildlife and gardens but with a string of signs protesting the newest industrial plant slated for her neighborhood: the $9.4 billion Sunshine Project, named for the bridge that spans the Mississippi River to connect the western and eastern halves of the parish.

"Fighting this facility and all these facilities is an everyday job," said Lavigne, who leads the faith-based environmental advocacy group RISE St. James.

Lavigne lives along an 85-mile stretch of the Mississippi River between New Orleans and Baton Rouge known as "Cancer Alley," a region dotted with industrial complexes that spew air pollutants such as chloroprene, a likely carcinogen, into predominantly Black communities along the waterway.

EPA data shows that residents of the region face elevated risk of cancer due to air toxics exposure. Lavigne, for one, discovered that she had autoimmune hepatitis and aluminum in her blood.

The diagnoses got her thinking about Formosa Plastics Group’s planned Sunshine Project.

Formosa’s complex — which would produce ingredients for products like car casings, drainage pipes and N-95 masks — would add one more facility in "Cancer Alley" at a time when the country is already grappling with COVID-19, a respiratory illness caused by the novel coronavirus that is exacerbated by exposure to air pollution.

The virus poses a particular threat for people of color, who are more likely to have preexisting conditions and to live in polluted communities.

"Before it even gets started," Lavigne said of the Formosa complex, "we need to stop it."

Announced in 2018, the 2,400-acre project is now subject to two lawsuits backed by RISE and other groups.

The challengers oppose siting the facility smack dab in the middle of a community where Black residents are struggling to protect not only their health amid the coronavirus pandemic but also their connection to their enslaved ancestors who are believed to be buried on the Formosa site.

They have already notched some early courtroom victories.

This summer, community members gained access to the Formosa property for a ceremony on Juneteenth, the day that commemorates the end of slavery in the United States on June 19, 1865. They marked the day on a burial ground located on the site.

A month later, Formosa wrote in a settlement agreement approved by the U.S. District Court for the District of Columbia that it would postpone some building on the site before Feb. 1, 2021. The company said last week that it now plans to hold off on construction of parts of its complex due to the pandemic (Greenwire, Oct. 21).

At the time the Formosa facility was announced, Louisiana Gov. John Bel Edwards, a Democrat, touted the project’s potential to bring 1,200 permanent jobs to the region.

"For more than 50 years, the Sunshine Bridge has connected the River Parishes in a strategic fashion that has enabled tremendous industrial growth and thousands of new jobs along both sides of the Mississippi River in Louisiana," Edwards said in a 2018 statement. "The new Sunshine Project continues that bridge into a brighter economic future for Louisiana."

Edwards’ office did not respond to a request for comment on this story.

Formosa’s Louisiana division is working with local officials to advertise openings and train local residents "to be in a position to complete for jobs" with an average salary of $84,500, said Janile Parks, director of community and government relations for FG LA LLC.

"FG is committed to hiring locally," Parks wrote in an email, which noted that the firm held an open house in 2018 to answer questions and discuss concerns. Parks also cited the company’s community development initiatives.

But the promise of jobs has lost its luster for community members who have lost friends and family to cancer. Moreover, they said, when a new plant comes, the most desirable positions tend to go to out-of-towners.

"Jobs come after a person’s life," Lavigne said. "We pray that God will give us jobs that won’t threaten people’s lives."

‘Evidence of a crime’

Located on the site of the Formosa complex is a fenced-off area that — to the untrained eye — appears to be just another stretch of the sugar cane plantation that formerly sat on the property.

A closer look might reveal a mound or a pile of brush marking a thatch of ground, beneath which lie the remains of the enslaved people who once worked in those fields.

Those unmarked burial sites on the Formosa property are a key element of community members’ fight against the complex.

"If you’re focused on physical geography and landmarks, you wouldn’t necessarily say, oh, that looks significant or that’s like a historic building," said Justin Kray, a cartographer who has been working with RISE, the Louisiana Bucket Brigade and other Formosa opponents.

"There’s a whole shift in preservation communities, which has been critiqued for focusing on, ‘Does a building look pretty?’" he continued. "We’re looking at preserving communities and social heritage and places that are important."

"It is important to note that despite assertions made by outside groups about ancestral ties to the site, no archaeologist has been able to confirm the identity, ethnicity or race of the remains discovered on FG property," Parks said.

A report released this year by the firm Coastal Environments Inc. indicates that the Formosa site could hold as many as seven unmarked cemeteries.

Kray said it is "quite likely" that the property holds the remains of more than just enslaved people, but the absence of more information on who is buried is exactly the point: Slavery and pervasive racism that has devalued Black individuals have erased family histories and obscured ancestral ties.

An unmarked grave is emblematic of the oppression, Kray said.

"This is essentially the evidence of a crime in the past," he said.

St. James resident Gail Leboeuf said she considers all the people buried on the plantations her ancestors.

"We’re fighting to keep all our relatives’ final resting place a hallowed ground," she said. "And we’re fighting for people on top of the ground to have decent lives and not have this particulate matter contaminating our lives and COVID hunting us down."

Environmental justice in the courts

Filing a successful environmental justice lawsuit is no simple undertaking, but Julie Teel Simmonds said she is up for the challenge.

The Center for Biological Diversity senior attorney is part of the legal team behind a D.C. district court lawsuit that targets an Army Corps of Engineers permit allowing Formosa to carry out dredge-and-fill activities for the Sunshine Project.

"We have laws that look so noble and well-designed," Simmonds said. "And yet whole communities can fall through the cracks."

She said this summer’s demonstrations over police brutality against Black men and women after the killings of George Floyd, Breonna Taylor and others have put even more of a spotlight on the Formosa litigation and environmental justice.

"I don’t think it’s been on America’s radar as much as it needs to be," Simmonds said.

Some state and federal officials are starting to take notice. For example, New Jersey last month enacted a law that requires state regulators to reject or condition permits based on disparate impact to communities of color.

"There is a clear trend of states taking environmental justice more seriously," said Beveridge & Diamond PC principal Julius Redd, who focuses his practice on how to help companies avoid the sort of litigation Formosa now faces.

While Louisiana has no such law in place, federal lawmakers have floated legislation to pave the way for stronger environmental justice challenges, and Democratic presidential nominee Joe Biden has shown interest in underscoring those efforts if he takes the White House.

"Savvy businesses are making preparations anticipating that," Redd said. "Many are seeing it as an opportunity to revise certain policies and procedures to more thoroughly consider environmental justice issues."

The legal battle is just one element of the fight by RISE and other groups against Formosa.

The groups have organized marches to draw attention to inequities in "Cancer Alley."

For one demonstration in Louisiana, Simmonds drove from her home in Colorado to deliver nurdles — pea-sized microplastic pellets that a facility owned by Formosa Plastics Corp. spilled into Texas waterways, earning the company a record $50 million penalty (Greenwire, Oct. 16, 2019).

"It won’t just be about the legal claims," said Simmonds. "It’s also going to be about the political efforts and public perception about plastics."

‘A Plan Without People’

Their fight doesn’t stop with the Formosa complex.

St. James is subject to a 2014 land use plan that slates existing residential areas in the parish’s 4th and 5th districts for future industrial activity.

"If changes are not made, the St. James Parish Land Use Plan will bring massive industrial pollution to the entire parish and eliminate two of the three majority African American districts in St. James Parish within the next decade," according to the report "A Plan Without People" that Kray co-wrote with Louisiana Bucket Brigade Director Anne Rolfes.

Delays to the Formosa plant construction have offered St. James residents some glimmers of hope.

"What I’m against is the fact that industry is located too close to residential areas," she said.

St. James resident Myrtle Felton said she mostly stays inside these days because when she stands in her yard for too long, she comes back inside and coughs, and her sinuses act up.

Felton, who is also a member of Inclusive, said that in 2014, she lost five members of her family — including her husband — in the span of three months. The grandmother of four said the air quality in her community, not to mention COVID-19, has her concerned for her own health.

She said she would like to see her grandkids reach adulthood.

"We don’t need any more chemical plants," Felton said. "We don’t even need the ones we have."