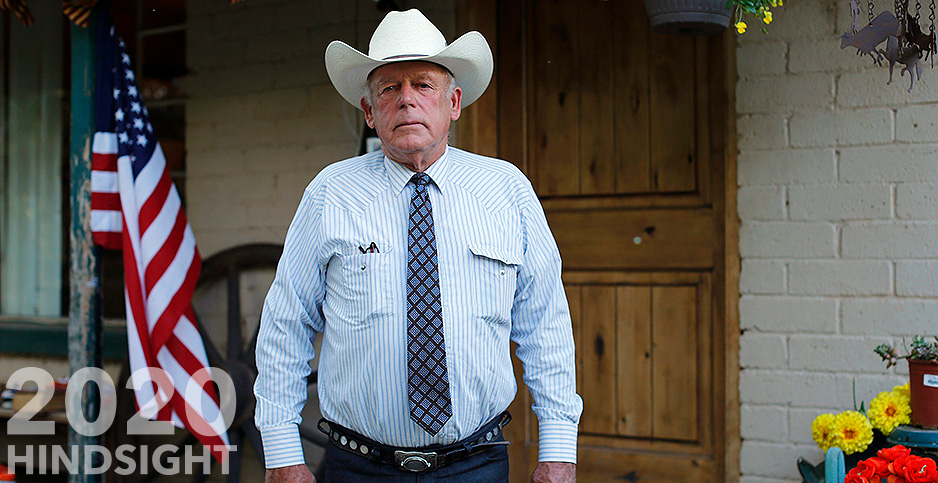 Rancher Cliven Bundy stands in front of his house in Bunkerville, Nev., in 2014. Bundy’s fight with the federal government over grazing on public lands erupted into an armed standoff. Mike Blake/REUTERS/Newscom

Part of a series on the decade’s pivotal moments in environment and energy. Click here to read other stories in the 2020 Hindsight series.

But that dispute erupted into the national spotlight in early 2014, when the Bureau of Land Management made its first and only attempt to round up Bundy’s cattle for auction, to settle what it said was more than $1 million in unpaid grazing fees and trespassing fines.

In that incident, the mine’s claim owner, Rick Barclay, called in the armed Oath Keepers, a quasi-military group who sent members to patrol the site and keep BLM employees from accessing the mine.

Nonetheless, Barclay publicly proclaimed he didn’t want his dispute to become another "Bundyville."

As it turned out, that was only a few months away: In January 2016, two of Bundy’s sons, Ryan and Ammon, led the occupation of a vacant building at the Malheur National Wildlife Refuge in eastern Oregon.

In many ways, little has changed since Cliven Bundy’s showdown with federal agents nearly six years ago.

Observers credit Trump’s victory with decisions by Wyoming and Utah to back off hardline efforts to transfer control of public lands (Greenwire, Feb. 27, 2017).

In fact, Trump would go on to roll back protections on more than 2 million acres of national monuments in the Beehive State in late 2017, a decision some praised as a "first step" despite the president’s vow to retain ownership of public lands (Greenwire, Jan. 4, 2018).

Still, Trump could soon nominate William Perry Pendley, a one-time advocate for the disposal of public lands, to helm BLM. He has served as the agency’s de facto acting director since the summer (Greenwire, Nov. 11).