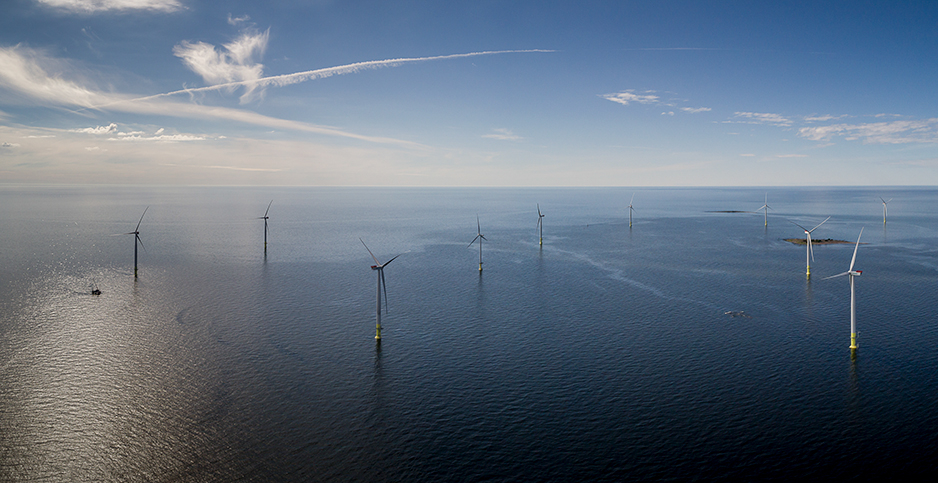 Like a spinning turbine barely visible on the horizon, the end of a regulatory odyssey to get approval for what would be the first U.S. freshwater offshore wind farm is now within sight for developers.

A final approval is needed from the Ohio Power Siting Board, which is among more than a dozen agencies that must sign off on the 20.7-megawatt Icebreaker project, a demonstration wind farm about 8 miles from downtown Cleveland in Lake Erie.

The board hasn’t signaled how or when it will vote. But the board’s staff has signed onto an agreement supporting approval of the project, and a decision could come as soon as January.

But the board’s decision isn’t the finish line but just another milepost on a much longer, more ambitious journey to jump-start an offshore wind industry in the Great Lakes region.

"It’s really a long game that we’re playing here," LEEDCo Vice President of Operations Dave Karpinski said in an interview. "And a lot of things have to fall in place before it’s going to make sense at a commercial level."

Icebreaker also is being watched by other states throughout the region, including neighboring Michigan, where efforts to jump-start an offshore wind industry fizzled a decade ago.

The project, conceived a decade ago and partially funded through Department of Energy grants, involves six 3.45-MW turbines rising almost 500 feet above the lake that would generate about 75,000 megawatt-hours of energy per year to be sold into the grid operated by PJM Interconnection LLC.

Karpinski believes the demonstration project can go a long way toward helping answer key questions surrounding the viability of offshore wind in the Great Lakes, beginning with the regulatory process, which had been a huge unknown.

"I think back to 2010 or 2011 when this project was taking shape and you asked people, ‘What permits do we need?’ And there wasn’t an easy answer," he said. "No one had gone through to figure that out yet."

As it turns out, Icebreaker needs eight major permits that require approval from an alphabet soup of 14 state and federal agencies, including the Ohio siting board, whose voting members represent a half-dozen state offices.

Building a wind farm in the midst of Lake Erie poses different engineering and technical challenges from the Atlantic Ocean. They include ensuring turbines can withstand the force of ice floes during winter.

While huge cone-shaped turbine bases would be used to break the winter ice on Lake Erie, special "mono bucket" turbine foundations — mammoth steel suction cups that will be fixed to the floor of the lake — are meant to ensure the structures can handle subsurface ice keels.

Construction, too, brings challenges. Locks in the St. Lawrence Seaway aren’t wide enough for special vessels used to install turbines in the Atlantic Ocean, so Icebreaker requires a barge retrofitted with jack-up legs and a large crawler crane.

Perhaps the greatest uncertainty regarding the future of wind energy in the Great Lakes, besides public acceptance, is whether the cost of the energy can compete in a rapidly evolving electric grid given the massive capital investments that will be required.

"The economics certainly are not attractive today, there’s no question," Karpinski said. "Offshore wind in the Great Lakes hasn’t been scaled. The supply chain’s not mature. We just haven’t invested in the ports yet. There’s a lot to do."

But Karpinski is no less bullish about the potential for offshore wind in the Great Lakes when he looks years out.

He points to what’s happening in Europe and along the Atlantic coast, where offshore wind costs have fallen faster than anticipated.

Walter Musial, who leads offshore wind research at the National Renewable Energy Laboratory, said the extent to which those economies of scale translate to the Great Lakes will be key to future development. For now, they are unknowns.

"Scale’s a huge determining factor, both in terms of the turbine size and project size," Musial said in an interview.

Another key is development of a Great Lakes supply chain, which would be needed to enable large-scale wind development on the lakes, he said.

Developing an offshore wind supply chain along the shores of Lake Erie has been a goal from the outset for LEEDCo, whose members include the city of Cleveland and several Ohio and Pennsylvania counties bordering the lake.

It’s a dream that won’t be realized if developers can’t demonstrate that the environmental benefits of offshore wind farms don’t outweigh the ecological and environmental costs.

A focus of the siting process in Ohio has been the impacts of Icebreaker on birds and bats in what’s been designated a globally significant "Important Bird and Biodiversity Area."

Conservation groups, which aren’t parties in the Ohio case, have taken different positions on the issue.

The only formal opponents are two northern Ohio residents whose legal expenses and expenses for expert witnesses are being funded by coal producer Murray Energy Corp.

Among those expert witnesses is Jeff Gosse, who retired last year as Region 3 energy coordinator for the Fish and Wildlife Service and who has expertise in avian radar and bat acoustic studies.

Gosse’s testimony concluded that developers haven’t presented "scientifically valid data" or identified methodologies sufficient for the board to determine the probable environmental impact on birds and bats, or that the project represents the minimum adverse environmental impact under Ohio law.

Icebreaker attorneys have twice sought, most recently in a post-hearing brief, to exclude the testimony on grounds that Gosse participated in the case as a government employee and that federal regulations prohibit his testimony without prior approval from FWS or the Interior Department.

The administrative law judge overseeing the case denied Icebreaker’s initial request and has yet to rule on the recent motion.

In addition to getting the final regulatory approval, the partnership is working to find a buyer for some of the energy from Icebreaker.

The developer has agreed to sell about two-thirds of the output to the municipal utility in Cleveland and Cuyahoga County, and it’s eyeing large energy users as potential customers for the rest.

"We’re still under discussions with other C&I [commercial and industrial] off-takers to balance that out," Karpinski said. "That’s the other big milestone we need to achieve."

‘It’s not a relaxing ride’

As originally proposed, Icebreaker was to be operational by the fall of 2017. The latest deadline is 2022, and avoiding further delays is important because DOE grant funding depends on it.

The same deadline exists for LEEDCo’s ability to capitalize on an 18% federal investment tax credit, which Icebreaker qualified for last year under IRS rules.

"Those are two dates that are really driving us," Karpinski said. "It’s not a relaxing ride by any means, but we’re confident that if we get a decision here early in 2020 that we’re still on a viable path for a 2022 construction season."

Whatever the fate of Icebreaker, the project is being watched in Michigan and other neighboring states.

In 2009, then-Michigan Gov. Jennifer Granholm (D) created a task force that studied the issue and identified areas within state-owned Great Lakes bottomland that were most favorable for development of offshore wind energy.

Around the same time, developer Scandia Wind LLC proposed a full-scale wind project consisting of 100 to 200 turbines in Lake Michigan.

The project ultimately ran into heavy local opposition and petered out. So, too, did the state’s efforts to pursue an offshore wind industry after Gov. Rick Snyder (R) won election to replace the term-limited Granholm.

"There basically has been no activity in offshore wind in Michigan since then," said Douglas Jester, a partner at 5 Lakes Energy, a Michigan energy and water policy consulting firm.

Jester said it’s unclear when, or even if, offshore wind in the Great Lakes will be needed to help Michigan or the region displace fossil fuels with cleaner energy.

"It would be unwise to try to make public policy decisions about offshore wind now," Jester said, because "implicit in that is the premise that you’re going to have offshore wind."

To the east in New York, a state legislator recently introduced a bill to establish a moratorium on wind turbines in any freshwater body within state boundaries. The bill is in response to an informal proposal to install 50 turbines in Lake Erie, just south of Buffalo.

Karpinski knows many of the questions and some of the criticisms surrounding Great Lakes wind projects won’t be easily answered.

But he thinks the combination of the wind resource over the lakes and the location within the PJM grid, the largest power market, is promising enough that it’s every bit worth the decadelong process of permitting and taking the first step to realizing the potential.

"If we don’t get through this first step, then there isn’t a second step," he said. "If you want to really transform the grid, then this is where you have to go."