‘Green cowboy’ who advised presidents worries the left is lost 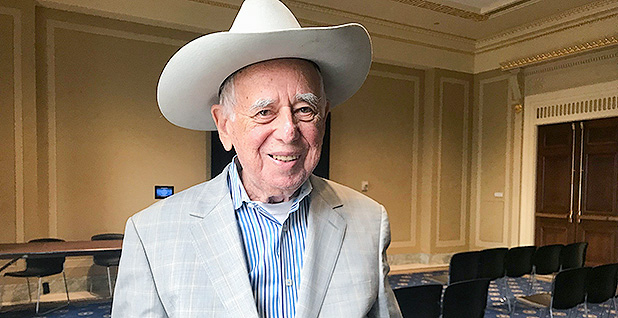 S. David Freeman, an "eco-pioneer" and former head of the Tennessee Valley Authority, is on a mission to tackle climate change. Hannah Northey/E&E News

The 92-year-old native of Chattanooga, Tenn., with a booming Southern drawl and signature beige cowboy hat, has helped shape the nation’s environmental and energy agenda since the 1960s.

He served as an energy adviser to Presidents Lyndon Johnson, Nixon and Carter, and laid the groundwork for today’s energy efficiency standards and federal solar research.

But these days, Freeman is more focused on his nine grandchildren as he makes the rounds on Capitol Hill to push for legislation to pivot the United States to only renewable energy by 2050.

"What concerns me is the absolute failure of the Democratic Party or environmental movement to tell my grandchildren what we’re for," Freeman said during a recent interview.

"What is the green agenda today? To bellyache about Trump? It’s not good enough. Mother Nature doesn’t give a damn to what you say. It depends on what you do."

Freeman, whose first name is Simon but who goes by Dave, is used to being a lightning rod in the energy community. He quashed the development of new nuclear reactors when he helmed the Tennessee Valley Authority in the 1970s and was accused by Republicans of gouging ratepayers during the energy crisis of 2001.

He’s now a senior advisor with Friends of the Earth, a group that’s fighting to close reactors on the West Coast among other issues.

Freeman recently sat down with E&E News to talk about his path to the White House, his critics and current energy leaders.

Tell me about your grandkids.

They’re all out of jail. [Smiles] They’ve never been in jail.

If you have nine grandchildren and none of them have been in jail, you’re lucky.

How did you end up in energy?

I started off my professional career as a civil engineer for the Tennessee Valley Authority in 1948. I then went to law school a few years later; I worked for TVA in the legal department when I got out of law school. Then I went to D.C. in ’61 to work for President Kennedy.

I came back to TVA in the ego trip of a lifetime as the chairman of the board under Jimmy Carter in ’77, and worked there till ’84. I’ve spent about 20 years of my life at TVA as first an engineer, then a lawyer, and then the top dog.

What was your job under Kennedy?

I first went to Washington to work for the old Federal Power Commission as the assistant to the chairman, Joseph C. Swidler, under Kennedy. He’d been the former general counsel of the Tennessee Valley Authority, and I knew him personally. I was there for the big blackout of ’65.

I was there in the chairman’s office; he’d already gone home for the evening. Every telephone started ringing, and I’m there by myself. We’d gotten no press, no attention. And all of a sudden, the whole world was on us.

About 10:30 that night, Johnson’s assistant calls me and says, "Get your boss off the TV. He’s scaring the shit out of everybody; he’s saying it could happen again." I said, "I’m going to get the dullest engineer and put him on."

He had a shop where he repaired umbrellas, sold them and haberdashery, and took in laundry and dry cleaning. He was a small businessman, worked about 80 hours a week, I guess.

What fueled your advocacy for energy efficiency?

I was in the White House under Lyndon Johnson in ’68 and then under Nixon. I think it was in ’68, it was two women from New Hampshire came, asked for a meeting; they laid out to me the numbers to show you can easily save more energy than this nuclear power plant they were fighting could provide.

It went off like a lightbulb in my head. I became one of the first advocates for energy efficiency in the federal government back in ’68.

And that translated into action?

I wrote Nixon’s first energy message, which had in it the first order to the [Federal Housing Administration] to require insulation in buildings that they insured.

What was your most important contribution?

I did a study for the Ford Foundation in 1973, and we put $4 million of the foundation’s money into it and proved that energy efficiency was a big deal and a cost-effective deal.

The most important decision I made in my life, I think, was I sent a copy of it to the governor of every state. One of them was Jimmy Carter. He actually read the report, and it formed the foundation of his energy policy.

You’ve faced some tough critics in your time.

Yes, I’ve been called a lot of bad things. I was called a socialist in the Nixon administration for pushing energy efficiency. I don’t feel like I’m making my case if I don’t have somebody pissed off at me.

Did you really help create the Energy Department?

One Saturday morning, a request from the Carter campaign came in to reorganize the government. We put together the outline of it, and that became the Carter proposal that was enacted into law.

What do you think about Trump’s proposal to sell TVA?

There was a lot of "mother love" for TVA, and it still exists. TVA came in in ’33 and took a very poor part of the country and made it middle class. They were the yardstick for low-cost power.

But they ought to be promoting electric vehicles and batteries, showcasing how zero-emission energy electricity can replace oil and gas. Either that, or they get the hell out of there and turn it over to Duke.

What do you think about the new EPA administrator, Scott Pruitt?

This bill is the only show in town, so I’m here. It’s a pale imitation of what we need, to be quite frank. I’m here to support it because it’s the only thing we have to support. But we need mandates, we need laws. And 2050 needs to be when we get it all done.

You’re concerned with the left’s message. How should it change?

The environmental movement can’t sell the time of day. They’re using the arguments of 10 years ago. It’s all about climate, which is the hardest thing to sell.

Why aren’t we talking about the fact that Republican children are in the hospital with asthma because the air is still dirty in the cities, and if we went to all electric cars, we’d clean up the air finally? Why isn’t that part of the dialogue?