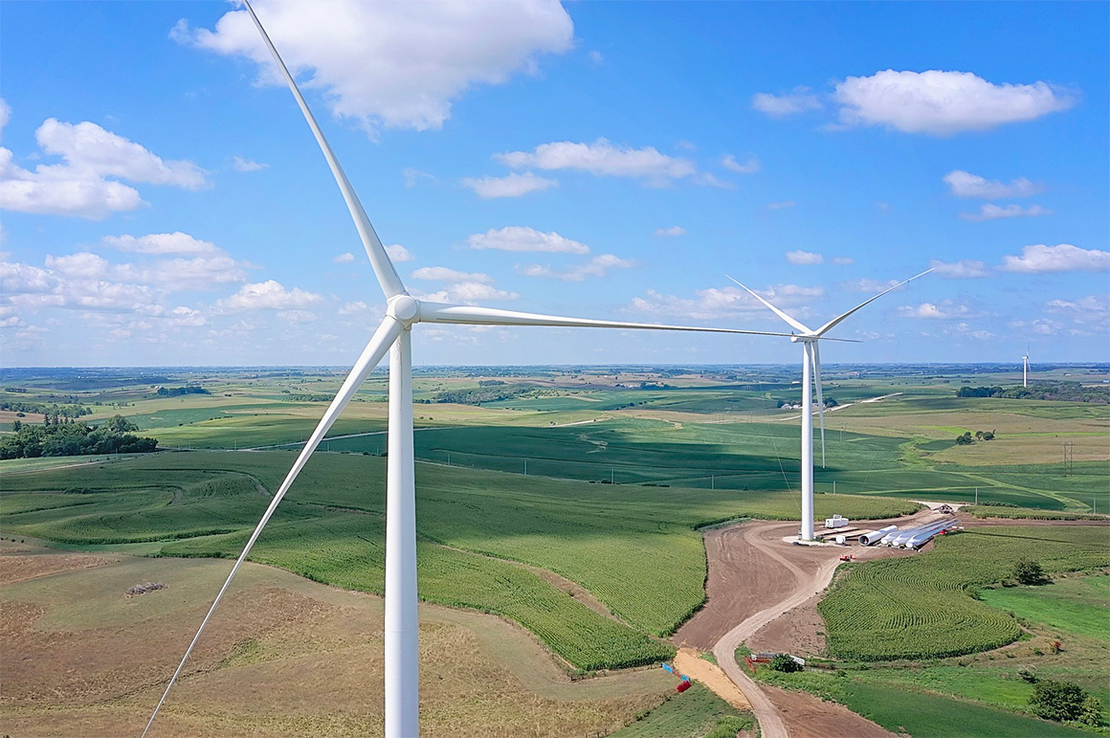 The largest-ever wind energy proposal in Iowa is getting blowback from some of the biggest champions of renewable energy — environmental groups and technology companies hungry for carbon-free power to run their data centers.

It’s not that critics don’t want more wind on the grid. But they say the nearly $4 billion that MidAmerican Energy Co. plans to invest almost exclusively in wind power could be better spent, especially considering tax incentives in the federal Inflation Reduction Act that improve the economics of solar energy and battery storage.

Josh Mandelbaum, an attorney for the Environmental Law & Policy Center, said the environmental coalition has done its own modeling that shows a different clean energy mix with solar power and battery storage would be cheaper for consumers and better for the environment by enabling faster retirement of some of MidAmerican’s coal plants.

Des Moines, Iowa-based MidAmerican Energy, a unit of an energy holding company controlled by Warren Buffett’s Berkshire Hathaway Inc., proposed its Wind Prime project a year ago. It includes 2,042 megawatts of wind and 50 MW of solar by 2025 (Energywire, Jan. 21, 2022).

The company said the addition would enable it to achieve its vision of providing renewable energy that’s equal to 100 percent of its Iowa customers’ annual electricity use.

Last month, the company filed a settlement with two consumer advocates, including a division of the Iowa Department of Justice, that sought to resolve concerns about rate-making terms being sought by MidAmerican.

MidAmerican said the agreement would mean an immediate savings of $100 million for electricity customers in 2023, provide rate stability into the future and provide other protections, including cost caps. The settlement also calls for the utility to perform a “resource evaluation study” within two years that would provide a broader study of its generating fleet.

The issue before the Iowa Utilities Board isn’t whether MidAmerican can build the wind projects, but who bears the risk of the investment and how costs are passed through to customers.

Iowa’s rate-making statute was approved in 2001 and enables state regulators to preapprove rate-making terms for new power projects if utilities meet certain criteria. The policy has been key to making both the state and MidAmerican leaders in wind energy by providing financial certainty to utilities, their investors and customers.

Among the requirements to qualify for advanced rate-making, utilities must show they’ve considered other sources of electric supply and that a proposed project is “feasible” compared with other “reasonable sources.”

Just last fall, regulators denied a similar request for advanced rate-making sought by Interstate Power and Light Co. (IPL), which had proposed terms for a 475-MW solar and battery storage project at the site of the retired Duane Arnold nuclear plant.

It its Nov. 9, 2022, order, the board said IPL didn’t show that it considered other sources of electric supply or that the proposed project was reasonable compared to those “other feasible sources.”

Among the options the utility failed to consider was a power purchase agreement compared with investing ratepayer money in a company-owned asset, the board said.

“The board is not convinced that IPL ownership of the facilities is reasonable based upon the anticipated market for electric supply that will result from the IRA,” regulators said in a 16-page order, referring to last year’s Inflation Reduction Act.

Environmental groups and tech companies say MidAmerican similarly falls short in its analysis of other feasible sources of power.

Regulators have set aside an entire week next month for a hearing.

MidAmerican officials declined to discuss the case, but spokesperson Geoff Greenwood referred to testimony filed with Iowa regulators to explain the company’s position.

In the testimony, Neil Hammer, general manager of transmission development and policy at MidAmerican, argues the company did consider other sources of supply and that the wind energy build-out is reasonable compared to those other sources.

The utility said its proposal is based on analysis like that previously accepted by the Iowa Utilities Board — a level of review that is also supported by an Iowa Supreme Court decision a decade ago.

“The standard does not require the utility to complete all manners of analysis to show that its proposed facility is superior in every regard to other alternatives,” MidAmerican said, adding that the law doesn’t require utilities to show that other power plants in their fleet — specifically coal plants — are cost-effective.

The tech companies have challenged several aspects of the Wind Prime proposal and say it lacks analysis supporting the need for the addition of nearly $4 billion more in wind energy.

Google, Facebook and Microsoft didn’t respond to requests for interviews. But a consultant for the companies agreed that the environmental groups’ call for a broader review of the utility’s generating fleet and future system needs is warranted, especially considering the incentives included in the Inflation Reduction Act.

“The IRA affords an opportunity for the board and stakeholders to conduct a thorough review of MidAmerican’s portfolio and potential alternatives and develop a more comprehensive understanding of MidAmerican’s future resource needs before authorizing MidAmerican to invest $4 billion in new generation which, as proposed, is for a redundant resource,” consultant Jeffry Pollock said in written testimony.

Consultants hired by the Environmental Law & Policy Center, Sierra Club and Iowa Environmental Council did their own modeling using post-Inflation Reduction Act costs and concluded that a portfolio of wind, solar and battery storage paired with accelerated coal retirements would “conservatively” save MidAmerican consumers $120 million compared to the utility’s proposal, Mandelbaum said.

While the company publicly states Wind Prime would help achieve its 100 percent renewable energy target and do so at no net cost to consumers, critics of the project say the real goal of the massive investment in more wind energy is boosting company profits.

“Wind Prime is not about decarbonization,” said Devi Glick, a senior principal at Synapse Energy Economics, one of the consultants.

“Wind Prime’s purpose is to maximize revenues for MidAmerican,” Glick said, adding that “approving Wind Prime as-is creates a wind-coal system that does not provide 100 percent clean energy and instead keeps five coal units running for 20 years or more, despite their advanced age, high costs, poor suitability for a high-renewable grid, and the presence of cheaper alternatives.”