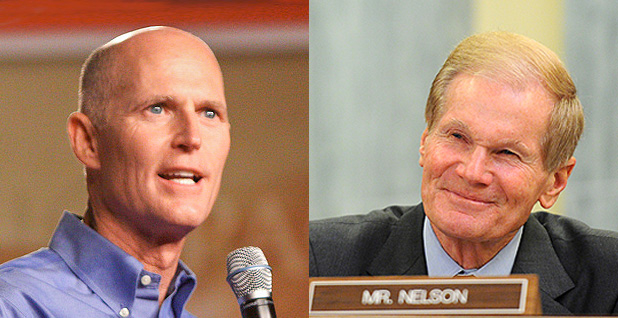 Why did Interior Secretary Ryan Zinke excuse Florida from the department’s bid to expand offshore drilling?

Was it, as he claimed, respect for "local voice"? Political machinations, as Democrats accuse? In electoral terms, the impetus matters little.

The race could easily be the most expensive midterm contest. It may well decide the majority party in the chamber after this year.

"Anything anybody does in an election year is deemed a political maneuver," said Susan MacManus, a politics and government professor at the University of South Florida and director of the annual Sunshine State Survey, a broad annual poll of residents.

"But there’s no question Floridians do not want oil drilling, and that extends to Republicans and Democrats.

"For Floridians who didn’t want [drilling], it’s probably welcome whether it was political or not," she said.

Scott was the key figure in Zinke’s reversal. Asked what caused the administration to change its position on Florida, Zinke said, "The governor" (E&E Daily, Jan. 11).

Offshore drilling matters to Florida voters, who do not want oil and gas development threatening beaches, tourism and fishing. The 2010 Deepwater Horizon disaster looms in the public consciousness.

Scott can also claim, if he wants, an instance of political independence from President Trump, who urged him to run in person at a Florida rally last year.

Polls show the president remains overwhelmingly popular among Florida GOP voters but with an overall underwater approval rating, according to the South Florida Sun Sentinel.

Scott and the environment

Perhaps most importantly for Scott, the Zinke affair gives him an environmental achievement — something the governor desperately needed.

Scott had no choice but to oppose the administration, MacManus said. "It was a political necessity," she said.

Long a target of environmental and energy advocates, Scott has a record of favoring state utility interests and the big sugar industry.

Environmentalists say his ties to agriculture interests have contributed to the state’s water quality issues, such as algal blooms in Lake Okeechobee from mineral-rich farm runoff and pollution in the Everglades.

Scott was a vocal critic of the Clean Power Plan’s emissions regulations, and in 2015, reports surfaced that his administration banned state environmental officials from using the phrases "global warming" and "climate change." The governor denied the charge.

In his first bid for governor in 2010, Scott ran on expanding offshore drilling. This week, the governor’s office sent a press release highlighting praise from state politicians and leaders for stopping it.

The governor himself tweeted after meeting with Zinke, "I will never stop fighting for Florida’s environment and our pristine coastline."

Predictably, environmental groups slammed both Zinke and Scott. Frank Jackalone, director of the Florida Sierra Club, called the move a "purely political move to aid the ambitions of Rick Scott."

Nelson, a longtime climate advocate, seems likely to stress the issue, and polls show environmental and climate matters have spiked in importance for Floridians.

For three years in a row, those concerns have ranked in the top five issues facing the state, according to the Sunshine State Survey.

A majority of Floridians support increased environmental protection supported by a new tax, according to the 2017 study.

And it is particularly important to voters between 18 and 34 years old, a growing demographic. Nearly 70 percent support new taxes to pay for environmental protection.

Nelson, Scott’s potential opponent, has taken a number of angles to attack Scott and Zinke.

He questioned the secretary’s statement that Florida is "off the table" for oil and gas drilling, asking whether that means an extension of the current moratorium on development in the eastern Gulf of Mexico beyond 2022, when it expires.

"This is a political stunt orchestrated by the Trump administration to help Rick Scott, who has wanted to drill off Florida’s coast his entire career," Nelson said in a statement. "We shouldn’t be playing politics with the future of Florida."

The White House denied such accusations. "I am not aware of any political favor that that would have been part of," press secretary Sarah Huckabee Sanders told reporters yesterday.

The incumbent also noted his long and consistent environmental record. "I have spent my entire life fighting to keep oil rigs away from our coasts," Nelson said.

In recent months, Nelson’s statements show the framework of a campaign attack plan, if Scott were to announce.

In the wake of Hurricane Irma’s destruction in Florida, Nelson took veiled shots at Scott’s rejection of climate change science.

"I expressed to them the importance of making sure that all families from Puerto Rico in Florida know exactly what federal resources are available to them," said Scott. Florida’s Puerto Rican population is an increasingly important voting bloc.

Polls show the two Florida heavyweights neck and neck, but the campaign may not kick off for some months.

With massive fundraising capacity and broad name recognition, Scott can afford to wait before officially announcing.

Florida has a late filing deadline, and the GOP primary is not until August. It is possible that Scott finishes the legislative session before entering the race in earnest.

Nelson shows no sign of letting up on the offshore issue in the meantime. On Wednesday, the third-term senator filed legislation to permanently ban drilling off Florida’s coastline.

"Florida’s environment and economy shouldn’t be used as political football to be tossed around," Nelson wrote on Twitter.