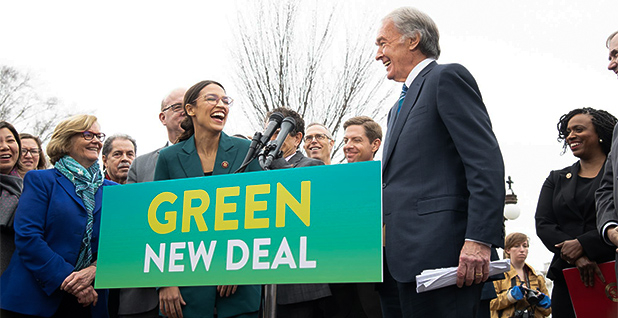 In 2009, with the nation’s economy in a tailspin, President Obama signed into law a stimulus package that aimed to give a herculean lift to the cause of clean energy, with $90 billion in investments.

Ten years later, the stimulus is being cited as a touchstone for the chief policy planners of the "Green New Deal," who are exploring ways to ramp up the renewable capacity-building of Obama’s law and fuse it with a far-reaching greenifying of American life.

"In many ways, we think of our plan as the stimulus that Obama never really gave us," said Robert Hockett, a Cornell University law professor and senior adviser to Rep. Alexandria Ocasio-Cortez (D-N.Y.), who spearheaded the plan in Congress.

"Our view is, this is going to be much bigger than that first stimulus, and it’s going to be more than just a stimulus. We’re thinking of it as a massive national reconstruction," he said.

The American Recovery and Reinvestment Act of 2009 poured billions in loans, grants and research funds into clean energy. Tesla Inc. and Nissan Motor Co. Ltd. got nearly $2 billion to finance their all-electric cars. Manufacturers of everything from batteries to fuel cells claimed tax credits. Energy efficiency programs paid to weatherize 800,000 homes. The Energy Department’s innovation shop scored its first funding. And it provided funding for the country’s first — and still only — large coal plant to capture the majority of its CO2 emissions.

The biggest slice of the energy funds, about 30 percent in all, went to building out the nation’s renewable power capacity. The Energy Department doled out cash grants, backed loans for solar and wind developers, and expanded tax credits for production and investment.

In seven years, solar generation grew thirtyfold and wind generation threefold, according to a 2016 assessment from the Obama White House.

"Back then, mainstream solar needed a push to get to large-scale projects," said Dan Reicher, a Stanford University lecturer and former member of Obama’s transition team who helped craft the stimulus’s energy sections.

Several 100-megawatt solar farms — a size that had previously made private investors nervous — went online with the help of stimulus money, he noted.

"Now it will take you many, many hands to count the number of projects bigger than 100 MW," said Reicher.

The "Green New Deal" resolution introduced by Ocasio-Cortez and Sen. Ed Markey (D-Mass.) this month called for a transition to net-zero emissions within a decade, but the movement’s researchers are still in the early stages of exploring ways to do it.

So far, many of the ideas being explored are products of the Democratic Party’s progressive wing.

There’s the universal job guarantee that cropped up in the resolution, or the idea of convening town hall meetings and other local and state forums meant to encourage citizen participation in the generation of policy. There’s also the public bank, inspired by the New Deal-era Reconstruction Finance Corp., that would oversee investments and issue bonds to finance energy projects, partly as a way to protect the public’s return on energy investment.

The stimulus also came at a unique economic time following a deep recession, when Democrats controlled the White House and Congress.

Even so, researchers say the "Green New Deal" ideas take a page from the stimulus’s playbook when it comes to encouraging renewable development and keeping the cost of clean energy on a downward trajectory.

"I think you’re going to see a lot of the same types" of investments, said Greg Carlock, "Green New Deal" research director at Data for Progress, a progressive think tank.

They also say they’ll get a better shot at realizing the green jobs promises of the stimulus, which faltered from a lack of "shovel-ready" projects designed to get people back to work fast — or, perhaps, the Obama administration’s failure to locate those projects.

"So much had to be spent so quickly without having time to gear up and get ready to go," said Hockett, the Ocasio-Cortez adviser. "One way of thinking of the ‘Green New Deal’ is a second bite at that particular apple."

Conservative critics of the stimulus, who assailed the clean energy sections as wasteful incursions into boutique technologies following a string of high-profile bankruptcies and canceled projects, also smell a reprise. Among the canceled projects were FutureGen, a planned coal plant in Illinois that would have captured its CO2 emissions.

Jordan, who once chaired a caucus of the chamber’s most conservative members, recalled the failure of solar panel maker Solyndra and three other clean tech companies that got large loans under one stimulus-funded program.

"They received hundreds of millions in taxpayer dollars. ALL went bankrupt," he said.

Defenders of the stimulus point out that in spite of those bankruptcies, the Energy Department loan program actually ended up netting an overall profit.

"It’s had an investment track record that I’d put up against any private-sector investment fund," said Reicher.

The stimulus helped lay much of the groundwork for any far-reaching decarbonization plan, he argued. Since then, large-scale solar projects have become common, traditional renewables have opened the way for second-wave technologies like offshore wind and Wall Street has grown fond of green investments.

"We have a major commitment from the private sector," said Reicher, meaning that if new clean energy programs were to be created, the federal government could attract larger amounts of private capital using fewer public funds.

"Who knows where that specific approach will go?" he said in reference to the "Green New Deal," adding that he believed legislation with clean energy investments could pass with bipartisan support. "I do know that I feel strongly that clean energy and climate is on the table."