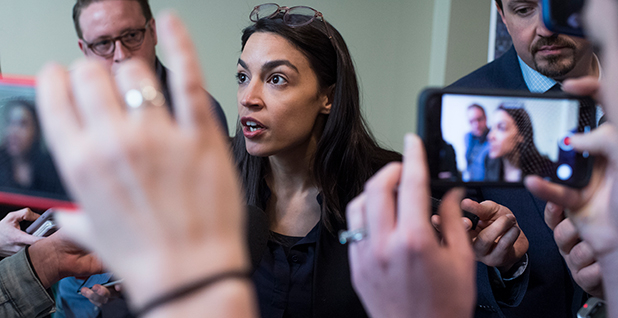 More than two weeks after the Senate rejected the progressive climate policy outline — and more than two months after the nonbinding resolution was originally introduced — Senate Majority Leader Mitch McConnell (R-Ky.) was on the floor talking about it.

His speech just before Congress left town for a two-week recess only underscored what has been apparent for months now: The Green New Deal is a 2020 presidential issue, and Republicans are likely to continue blasting it for the sake of messaging.

While the Senate vote is past, the Green New Deal will likely permeate every climate debate in the near future, even in the few pockets of Capitol Hill where climate change isn’t so partisan anymore.

McConnell conceded on Fox News earlier this month that the Green New Deal tally last month was a "show vote," despite his past complaints about wasting the Senate’s time.

"It was," McConnell told Fox News host Bret Baier. "I don’t intend to spend all of our time doing that sort of thing, but once in a while people ought to go on record and decide whether they’re willing to vote for what they say they’re for."

Democrats have responded in kind by questioning why Republicans have ignored climate change for nearly a decade and why much of their caucus still denies or ignores the science.

And they may have scored a political win in the sense that the Senate is debating climate change for the first time since Democrats were in control, and Republicans have been asked repeatedly by reporters whether they believe in climate change and what they plan to do about it.

"I just don’t think the game right now is playing ‘Mother May I’ with Mitch McConnell," said Sen. Brian Schatz (D-Hawaii) recently. "We have to win this argument, and the public is behind us, and whether it’s a renewable portfolio standard, or keep it in the ground, or a Green New Deal, or a carbon fee, we have to take bold action that is equal to the moment."

But for the GOP, it’s a simple political calculus. Six Democratic presidential candidates have endorsed the Green New Deal resolution, and Republicans think Democrats generally are tied to the plan.

Just as Republicans have long panned any Democratic health care reform proposal as "socialized medicine," they have warned the Green New Deal is "socialism" and launched a series of misleading attacks on the resolution.

"You had a senator that is running for president outside the Capitol building on the same day the vote was held, holding a rally in favor of the Green New Deal," Senate Environment and Public Works Chairman John Barrasso (R-Wyo.) said in a recent interview.

He was referring to Sen. Kirsten Gillibrand (D-N.Y.), a 2020 candidate who joined lead sponsor Sen. Ed Markey (D-Mass.) and activists from the Sunrise Movement outside the Capitol for a rally and news conference the morning before the vote.

"Now, she came in here and voted ‘present,’ so you talk about hypocrisy, that’s certainly part of it," Barrasso added. "But she’s still promoting this, and if that’s her plan for America, I’m going to continue to fight and oppose this kind of plan."

The attitude is much the same on the House side, where Republicans have called attention to the Green New Deal and probed witnesses at hearings about how much it would cost.

They GOP likes to showcase Rep. Alexandria Ocasio-Cortez (D-N.Y.), a self described democratic socialist and one of the Green New Deal’s authors, as an example of how the Democrats have moved too far left.

The Energy and Commerce Committee appears to have reached a bipartisan consensus that climate change is real and worth addressing, even if Republicans reject the large policy proposals that scientists and Democrats say will be needed.

But ranking member Greg Walden (R-Ore.) has repeatedly called for the panel to have a hearing on the Green New Deal, most recently during the markup of H.R. 9, the Democratic bill to keep the United States in the Paris Agreement that’s due for a floor vote this week (see related story).

At a House Oversight and Reform hearing earlier this month, ranking member Jim Jordan (R-Ohio) opened by saying he thought the hearing was really "about the Green New Deal."

It wasn’t. But that didn’t stop Republicans from talking about it and probing former Secretary of State John Kerry and former Defense Secretary Chuck Hagel about the proposal, which neither had anything to do with.

"Ninety-one co-sponsors, every major Democrat presidential candidate has endorsed it, 13 senators, so I assume it will be talked about," Jordan, a prominent member of the hard-right Freedom Caucus, later told reporters. "But of course, on the other side, when it was brought up for a vote, not one single person would vote for it."

‘Whistling past the graveyard’

Many Senate Democrats, indeed, are not chomping at the bit to talk about the Green New Deal after a vote in which they were forced to stay unified by voting "present," though it’s a topic on the campaign trail.

Still, from their perspective, the vote has had obvious ripple effects that have allowed them to begin building a policy consensus.

Barrasso said he’s talked to Alexander about it and is interested, as is Senate Energy and Natural Resources Chairwoman Lisa Murkowski (R-Alaska).

That and other "energy innovation" proposals likely would not be enough to decarbonize the energy sector in line with the most recent U.N. Intergovernmental Panel on Climate Change report, which recommends net-zero emissions by 2050 to keep warming under 1.5 degrees Celsius over preindustrial levels.

But Democrats say they’re talking to Republicans about the issue now, even if the GOP is still miles away from supporting a broader effort, such as a carbon tax.

"I think the obvious answer is they’re not there yet," Sen. Sheldon Whitehouse (D-R.I.) told reporters. "I think as a general proposition, you can clearly say that Republicans are a lot more nervous about this issue and where they are on it than they were even two years ago."

Murkowski’s committee has now held two climate hearings, one of which featured extensive discussion of carbon pricing, and hardly any political stunts related to the Green New Deal.

"That’s progress, and there is a lot of I would say bipartisan conversation about what are appropriate solutions now on the Energy and Natural Resources Committee, for example," said Sen. Martin Heinrich (D-N.M.). "So we’ve moved from denialism to some flavor of delay, but I think there’s more and more pressure to move from that to, OK, what can we agree on in terms of solutions?"

While there’s more agreement on moderate action between the lines, Republicans clearly aren’t done attacking the Green New Deal, nor are progressive activists done injecting it into the presidential conversation.

The Sunrise Movement, the progressive group that helped give the proposal prominence, is holding a series of town halls with organizers and Democratic politicians around the country, and several environmental groups have pushed to have a Democratic primary debate entirely about climate change.

In the most recent example of their influence, Sunrise and its cohort got Rep. Ben Ray Luján (D-N.M.), the fourth-ranking House Democrat, to endorse the Green New Deal in the lead-up to his 2020 Senate race.

On the other side, House Natural Resources ranking member Rob Bishop (R-Utah), who has been at the center of a couple of Green New Deal stunts, said he would gladly eat another hamburger as part of the GOP’s attempt to show that the resolution would ban cows.

Bishop caused a stir last month when he said the Green New Deal is "tantamount to genocide." He then told reporters he is an "ethnic" because he is a "Westerner," comments he later described as "pure sarcasm."

"It won’t get any better, but it will continue to be discussed," Bishop said of the Green New Deal.

Today, a group of House Republicans will introduce a discharge petition to force a vote similar to the Senate’s. They are unlikely to get the 218 signatures necessary for it to succeed.

Schatz, a prominent climate hawk and participant in the recent Green New Deal debates, tamped down concerns that the GOP would simply use the resolution to blast Democrats on the campaign trail and in the Capitol Hill messaging war.

The other side, he said, is "going to make their dishonest ads no matter what you do."

The key, however, is to shoot high enough to both please activists and meet emission reductions laid out in the most recent science, Schatz said.

"If we treat this like we’re trying to get an amendment to the defense authorization so that we can score a victory, then we’re whistling past the graveyard," Schatz said.