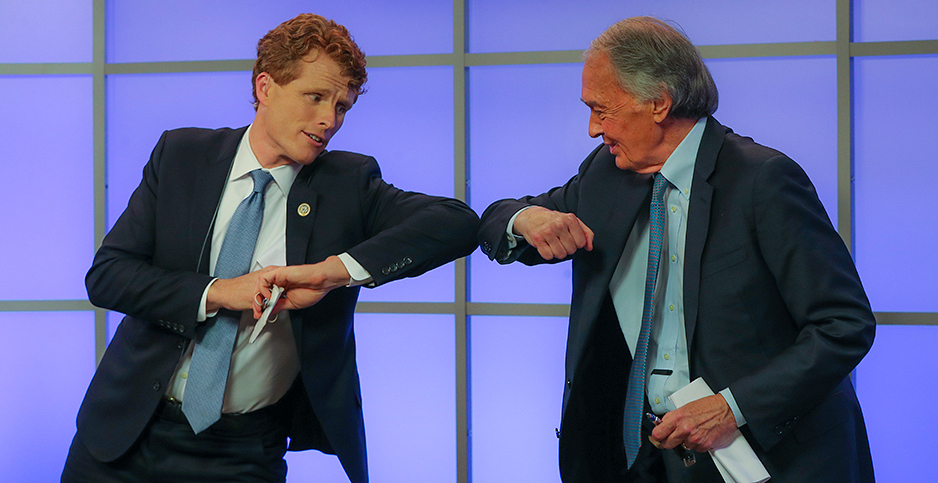 The Democratic primary for a Massachusetts Senate seat features candidates from two separate generations who are competing vigorously for the youth vote in a state famous for its colleges and universities.

Campaign events and debates, including one this week in Springfield, made it clear that the September primary is a generational contest. In the heavily blue state, the winner of that race is nearly guaranteed to win the seat in the November general election.

Incumbent Sen. Ed Markey, 73, brings what could be a key advantage to the fight for young people: a lengthy record on climate change policy, including as the lead sponsor of the Green New Deal and a leading author of the Energy Independence and Security Act of 2007 and the unsuccessful "American Clean Energy and Security Act of 2009."

"When I introduced the Green New Deal with Alexandria Ocasio-Cortez, it unleashed a young generation, and all of their energy, to work on the climate crisis. Alexandria Ocasio-Cortez has said quite clearly that Ed Markey is the generational change which we are waiting for," Markey said when asked what he would do if he were given another six years in the upper chamber.

"And it’s because on that issue of climate change, which is at the top of the list of concerns of young people, I have been the leader," he said. "Appliance efficiency standards, fuel economy standards for vehicles, the Green New Deal. And the Green New Deal has changed the debate in our country on the climate crisis on our planet."

Markey later brought up issues on which he took a leading role — like net neutrality and forgiving student debt — that were key concerns for young people.

‘Fight of my generation’

Kennedy, 39, has called the race part of a "fight of my generation" and said the Bay State needs new representation in Washington. But he denied that he’s making an argument on age.

"This isn’t about age, and it isn’t about seniority," he said at the debate. "It’s about meeting this moment and doing everything that you can possibly do to take it on."

And while he supports the Green New Deal, Kennedy criticized Markey for not doing enough to actually implement it.

"It’s a resolution that has not passed," Kennedy said. "What did pass: the Iraq war. And now, a generation that was not born on 9/11 is overseas fighting our wars that have cost $6 trillion."

Kennedy went on: "We’ve got $1.7 trillion in student loan debt. Sen. Markey passed the crime bill that has led to a generation of incarceration for African-American men, expanded the death penalty and quadrupled funding for prisons. Sen. Markey voted for NAFTA."

Working to actually make the real changes the Green New Deal calls for, Kennedy said, is "a question of political will. And there is no chance you are going to act on any — either the resolution or the policies that the gentleman articulated or Sen. Markey articulated — unless you change the power dynamics in Washington."

‘Hot before the planet was’

Along with Ocasio-Cortez’s endorsement, another major source of help for Markey has been the Sunrise Movement, the youth-focused advocacy organization best known as a vocal Green New Deal advocate. He’s conducted events with the group and participated in some social media banter.

"Ed Markey was hot before the planet was," the organization tweeted in February, alongside a photo of Markey from shortly after he was first elected to the House in 1976.

Sunrise employees and volunteers in April helped propel to fame a photo of Markey wearing an iconic pair of Nike Air Flight 89 shoes, and the group has worked with other youth groups to fundraise and organize for him.

"Sen. Markey wins the youth vote, hands down, because he is the Green New Deal," said Natalie Mebane, political director at 350 Action, the U.S. advocacy arm of 350.org. The group gave Markey its first endorsement of the 2020 campaign cycle and has been fighting to keep him in the Senate.

"Being the original sponsor of the Green New Deal has lifted his profile among young people, and he’s in a safer position because of that," she added.

Mebane said young voters often don’t turn out to vote "because they don’t feel inspired, they don’t have a candidate they believe in." But Markey has shown he can be inspiring, she said.

Nonetheless, Kennedy appears to be ahead of Markey with young voters. A February poll by the University of Massachusetts, Amherst, had Markey with support from 39% of respondents to Kennedy’s 36% — well within the 5.9-point margin of error — but had Kennedy beating Markey among young people by a ratio of nearly 2-to-1, 55% to 23%.

And any effort the candidates put into the youth vote might have a limited impact. Young people notoriously turn out to vote far less than their older counterparts, and this year’s primary is Sept. 1, so it doesn’t coincide with Massachusetts’ presidential primary or any other races except state Legislature primaries.

Furthermore, the COVID-19 pandemic could keep college students at their out-of-state homes, removing a key source of young voters in the state.

"In primaries, seniors and older voters have shown historically to consistently turn out at higher rates. Anything they get from an 18-to-30-or-so demographic, I think, is gravy," said Matt Barron, a Massachusetts political consultant who favors Kennedy. "I think it’s really going to be decided by folks higher up on the age scale."