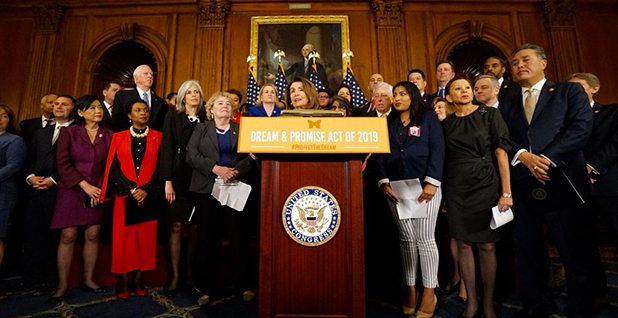 Concerns over the Green New Deal could complicate the chances of the House taking up a fiscal 2020 budget resolution in coming weeks.

House Budget Chairman John Yarmuth (D-Ky.) said this week that his committee would mark up a spending blueprint the first week in April, but he said it will not contain the sweeping progressive plan for combating climate change.

"We will have some climate initiatives, but we are not going to try to" include the Green New Deal, he told reporters this week. "First of all, the Green New Deal is not really a proposal, so I don’t know what numbers you can possibly use."

Moderate Democrats have privately suggested that backing the bold, undefined plan could play into GOP messaging that the party favors budget-busting mandates to fight climate change.

But Yarmuth conceded that failing to include major elements of the Green New Deal could complicate moving it to the floor for adoption, given that 90 Democrats have signed on as sponsors of the resolution advocating an ambitious effort to combat global warming.

House Democrats hold only a 36-seat majority, so if Republicans were united against the budget it would only take fewer than half the backers of the Green New Deal to sink it.

It would hardly be the first time partisan jockeying has held up a budget resolution. Over the past decade, adopting the fiscal plan has been the exception, not the norm, as both parties have tried to protect vulnerable members from budget votes that could easily be distorted for political gain.

Asked about a floor vote on the budget, House Majority Leader Steny Hoyer (D-Md.) this week declined to offer a time frame and would only say he’s waiting on a recommendation from the Budget Committee.

Like most Democratic leaders, Hoyer trained his fire on President Trump’s $4.8 trillion request rather than offer specifics on the Democrats’ own plan.

Hoyer said his main goal is making sure there is at least an agreement on overall discretionary spending levels — if not a full budget plan — because those are needed to write the 12 fiscal 2020 appropriations bills.

The budget itself is only meant to guide appropriators.

Yarmuth said his initial meetings with progressives have not generated "huge ideological obstacles" from the party’s left flank. "They are not putting a lot of pressure on us to include Green New Deal, that type of thing in the budget document," he added.

The Congressional Progressive Caucus is drawing up its own budget, in part to pressure the party to include priorities like the Green New Deal and Medicare for All in its proposal.

Its focus will be reining in defense spending, or at least pushing for parity between defense and non-defense discretionary increases, but progressives are also pushing to talk about climate and other priorities in broad strokes in the Democratic budget.

But both the budget and the Green New Deal are so vague that they can often be defined differently by different members. In that sense, progressives said yesterday they didn’t expect it to be much of a hurdle for the main Democratic budget offering.

To Rep. Ro Khanna (D-Calif.), including the Green New Deal in the budget proposal could be as simple as boosting funding for the Advanced Research Projects Agency-Energy or expanding renewable energy and electric vehicle tax credits.

Rep. Pramila Jayapal (D-Wash.), co-chair of the CPC and a member of the Budget panel, said a "nod" to progressive climate and health care priorities would be sufficient.

It may all be a moot point. Jayapal gave the budget a "50-50" chance of even seeing the floor and passing the House.

"The reality is budgets haven’t tracked at all with what ultimately gets passed, and so then it just becomes a question of how much political capital do you want to expend on it," she said.

Republicans, meanwhile, are more than eager to highlight how Democratic differences might doom their budget.

"At least we’re trying to put out some kind of markers to begin the negotiations to try to get our fiscal house in order," said Rep. Liz Cheney (R-Wyo.), the House GOP caucus chairwoman. "Hopefully, the House Dems will try to push a budget, but they’re showing no promise right now."

Rep. Jason Smith (R-Mo.), a Budget Committee member, offered what’s likely to be a common refrain from Republicans in the coming weeks, telling reporters that the Green New Deal is too expensive to attach to the budget.